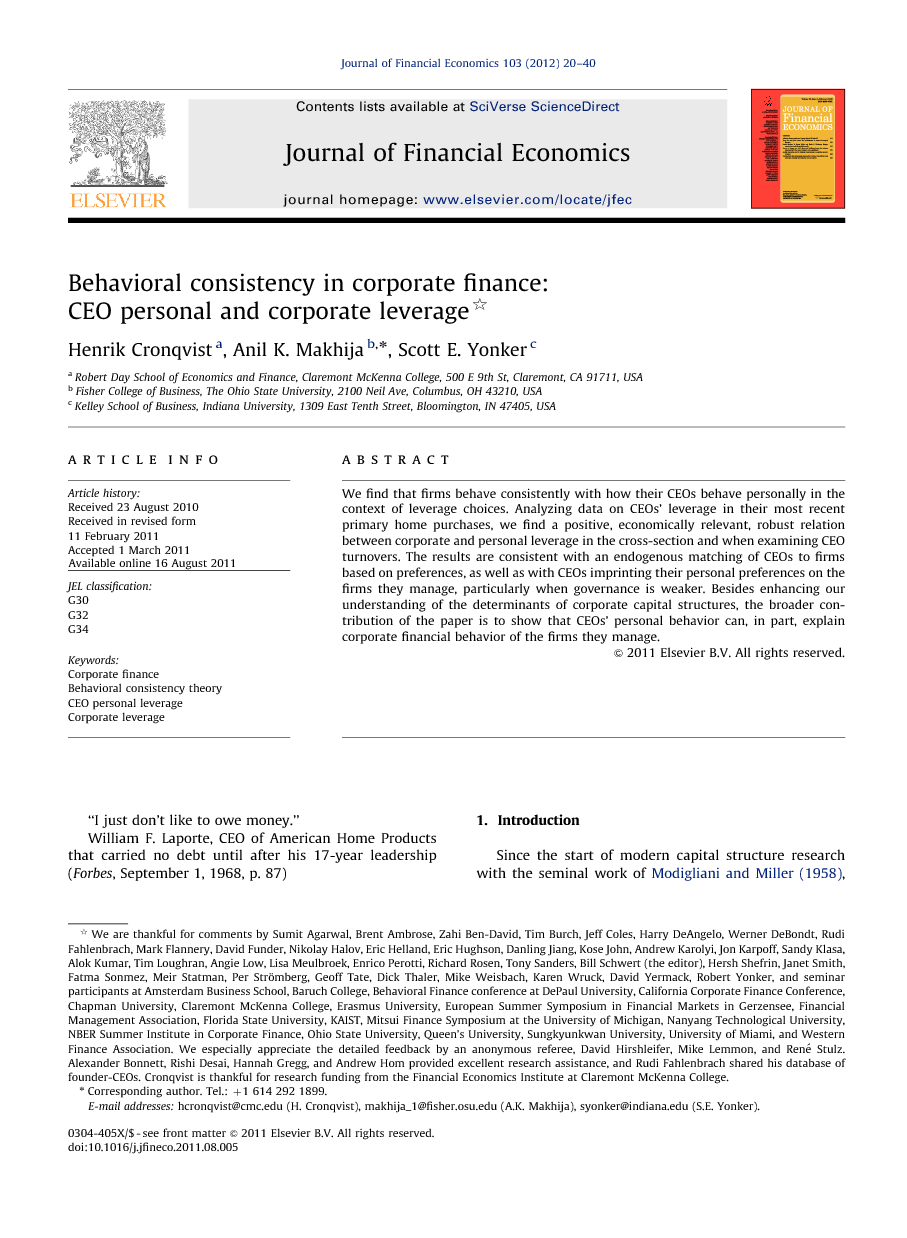 We find that firms behave consistently with how their CEOs behave personally in the context of leverage choices. Analyzing data on CEOs' leverage in their most recent primary home purchases, we find a positive, economically relevant, robust relation between corporate and personal leverage in the cross-section and when examining CEO turnovers. The results are consistent with an endogenous matching of CEOs to firms based on preferences, as well as with CEOs imprinting their personal preferences on the firms they manage, particularly when governance is weaker. Besides enhancing our understanding of the determinants of corporate capital structures, the broader contribution of the paper is to show that CEOs' personal behavior can, in part, explain corporate financial behavior of the firms they manage.

The scientific basis for the hypothesis examined in this paper is an extensive set of well-cited studies on “behavioral consistency theory,” i.e., the notion that individuals tend to exhibit consistent behaviors across different situations. While behavioral consistency has the potential of explaining, at least in part, a broad set of corporate finance decisions, in this paper we take a first step by examining the relation between CEO personal and corporate leverage. We find that this is a promising empirical approach because firms behave consistently with how their CEOs behave personally, at least in the context of leverage choices. We find that CEOs personal debt preferences carry over to the corporate domain so that CEOs who do not seem to like debt personally manage firms with significantly less corporate leverage, all else equal. In terms of explaining the variation in observed capital structure, personal leverage is comparable to several standard determinants of capital structure such as firm size and profitability, and explains more of the cross-sectional variation in capital structures than does any one of a dozen personal CEO characteristics. One economic mechanism behind our results appears to be endogenous matching of CEOs to firms, whereby firms seeking, e.g., conservative capital structures match with top executives with similar debt preferences. We also find support for an alternative mechanism. Particularly when corporate governance is weak, we find that CEOs appear to more significantly imprint their personal debt preferences on corporate capital structures. The broader contribution of our paper is to show empirically that personal behaviors of CEOs can be a valuable basis to predict corporate financial behavior of the firms they manage. In other fields of economic research, Heckman and Rubinstein (2001) and Heckman, Stixrud, and Urzua (2006) show the predictive power of personal characteristics for non-financial economic outcomes. It is therefore a fruitful avenue for future research to examine additional questions related to CEOs' personalities, personal characteristics, and corporate decision-making.