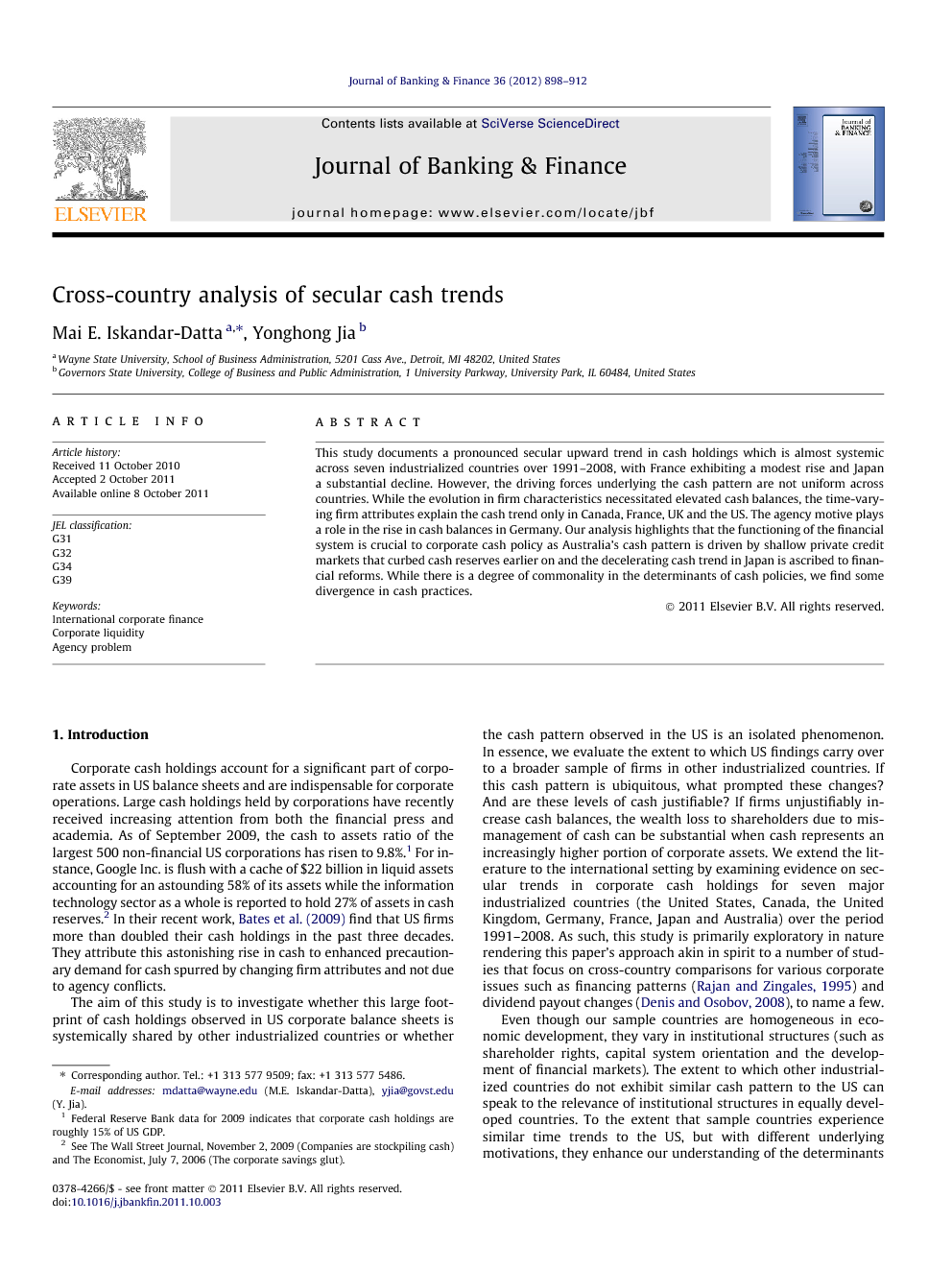 This study documents a pronounced secular upward trend in cash holdings which is almost systemic across seven industrialized countries over 1991–2008, with France exhibiting a modest rise and Japan a substantial decline. However, the driving forces underlying the cash pattern are not uniform across countries. While the evolution in firm characteristics necessitated elevated cash balances, the time-varying firm attributes explain the cash trend only in Canada, France, UK and the US. The agency motive plays a role in the rise in cash balances in Germany. Our analysis highlights that the functioning of the financial system is crucial to corporate cash policy as Australia’s cash pattern is driven by shallow private credit markets that curbed cash reserves earlier on and the decelerating cash trend in Japan is ascribed to financial reforms. While there is a degree of commonality in the determinants of cash policies, we find some divergence in cash practices.

This study documents compelling evidence that the secular upward trend in corporate cash holdings observed for the US extends to a sample of industrialized countries for 1991–2008 period, with the exception of Japan where firms experience a substantial decline in cash balances—i.e., the cash pattern is almost systemic in industrialized countries. The secular cash trend is accompanied by substantial leverage declines in all countries with Japanese firms deleveraging the most. The unique situation in Japan is due to rent extraction behavior of its powerful banking sector, which forced Japanese corporations to hold large cash balances during the 1980s. Our evidence highlights that Japanese firms’ cash policies have become more economically oriented since the 2000s. We also find that firms across sample countries exhibit, on the one hand, commonality in the determinants of cash holdings, suggesting that the correlation between firm attributes and cash holdings documented in the US is not spurious, and on the other hand, differences in their cash policies, pointing to a uniqueness of cash decisions in each country. Our analysis reveals that firm attributes evolve substantially over the past two decades in all seven countries. Sample firms become smaller and riskier, and shift away from investing in inventory and physical capital toward investing in R&D projects. In a nutshell, corporations in these industrialized countries have undergone major changes, which have driven firms to elevate their cash balances for precautionary purposes. Despite this convergent evolutionary change in firm attributes across countries, the changes in modeled firm characteristics can explain the increases in cash only in some countries, namely, Canada, France, and the US. Firms in Australia and Germany increase their cash balances beyond levels expected from the evolution in known firm attributes. The analysis from a battery of tests on whether the agency motive drives the secular pattern in cash reserves provides evidence that German firms’ cash policy setting suffers from agency problems. In the case of Australia, our analysis shows that the upward cash pattern is driven by shallow private credit markets which curtailed corporate cash holdings during the earlier period of our study. Our results highlight that the functioning of the financial system is crucial to cash policy as shown in Japan and Australia.