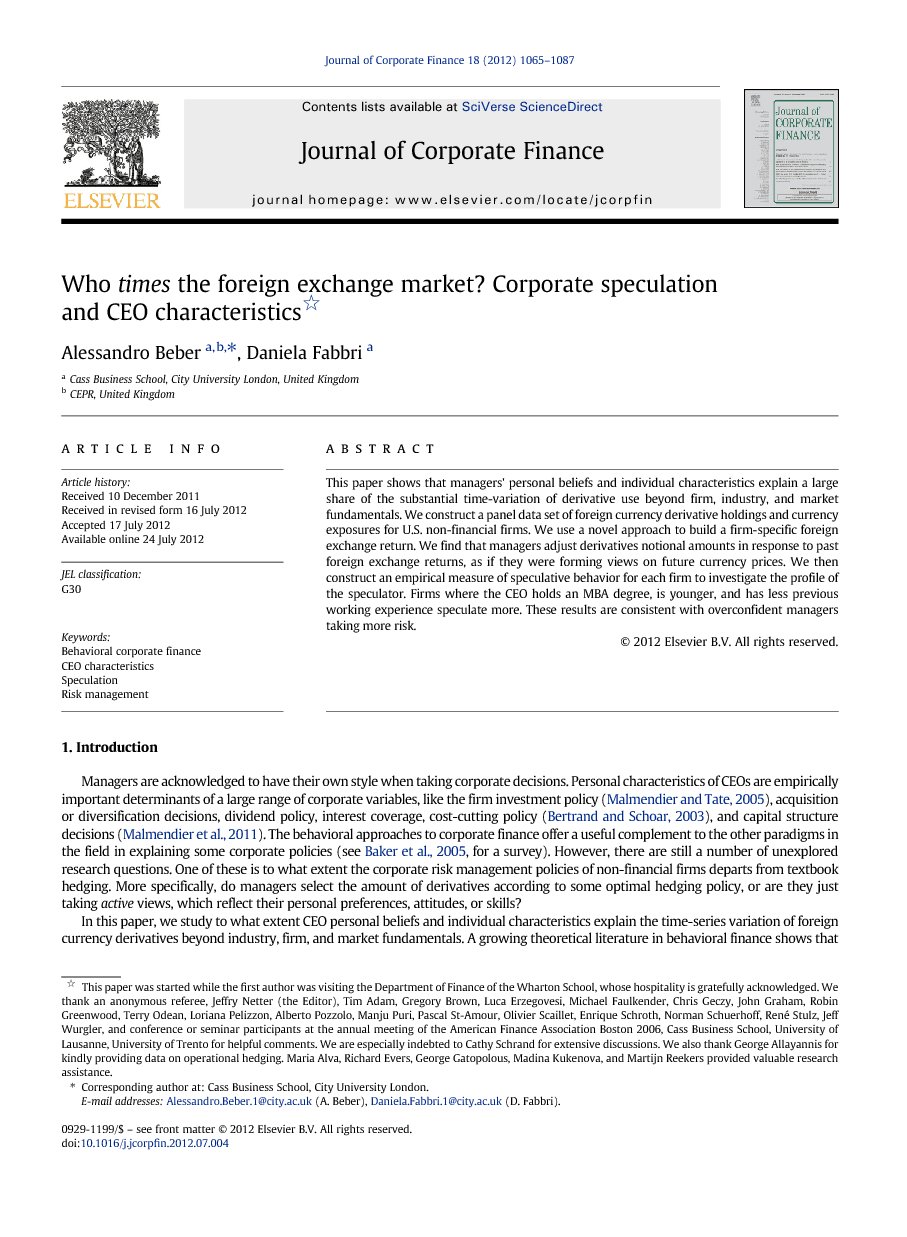 This paper shows that managers' personal beliefs and individual characteristics explain a large share of the substantial time-variation of derivative use beyond firm, industry, and market fundamentals. We construct a panel data set of foreign currency derivative holdings and currency exposures for U.S. non-financial firms. We use a novel approach to build a firm-specific foreign exchange return. We find that managers adjust derivatives notional amounts in response to past foreign exchange returns, as if they were forming views on future currency prices. We then construct an empirical measure of speculative behavior for each firm to investigate the profile of the speculator. Firms where the CEO holds an MBA degree, is younger, and has less previous working experience speculate more. These results are consistent with overconfident managers taking more risk.

In this paper, we hand-collect information on foreign currency derivatives and manager personal characteristics for a panel of large non-financial firms. We show a substantial time-series variability of derivative holdings. We document that managers change the notional amount of currency derivatives in response to the past dynamics of the foreign exchange rate. Managers seem to be timing the foreign-exchange market and this behavior is consistent with several behavioral biases that the theoretical literature has formalized and previous empirical studies have documented in other corporate finance settings. For each firm in our sample, we construct an empirical proxy for speculation as the residual of derivative holdings regressed on firm fundamentals and time effects. When we relate our empirical proxy for speculation to CEO personal characteristics, we find that firms speculate more when the CEO has an MBA degree, is younger, and has less working experience. The manager personal characteristics increase the explanatory power for the cross-section of speculation by about 50% with respect to firm, industry and market variables. Our empirical evidence strongly supports theories that have linked these personal characteristics to overconfidence and a more tolerant attitude toward risk. There are other related open questions left for future research. For instance, it would be interesting to better understand why the CEO personal characteristics affect currency derivative holdings, when day-to-day hedging decisions for large corporations are done mostly at the Treasurer level. A possible explanation would be that CEOs are imprinting their personal marks on the companies they manage at all levels. This is certainly plausible for the compensation variables, which may be good proxies for the overall compensation policy of the management. As regards the other personal characteristics, our findings could be the outcome of how the hedging results are evaluated. For example, younger CEOs, CEOs with less working experience, or CEOs holding an MBA degree, could “prize” relatively more absolute results, rather than hedging results relative to the underlying exposure, giving an implicit incentive to the Treasurer to time the currency market.