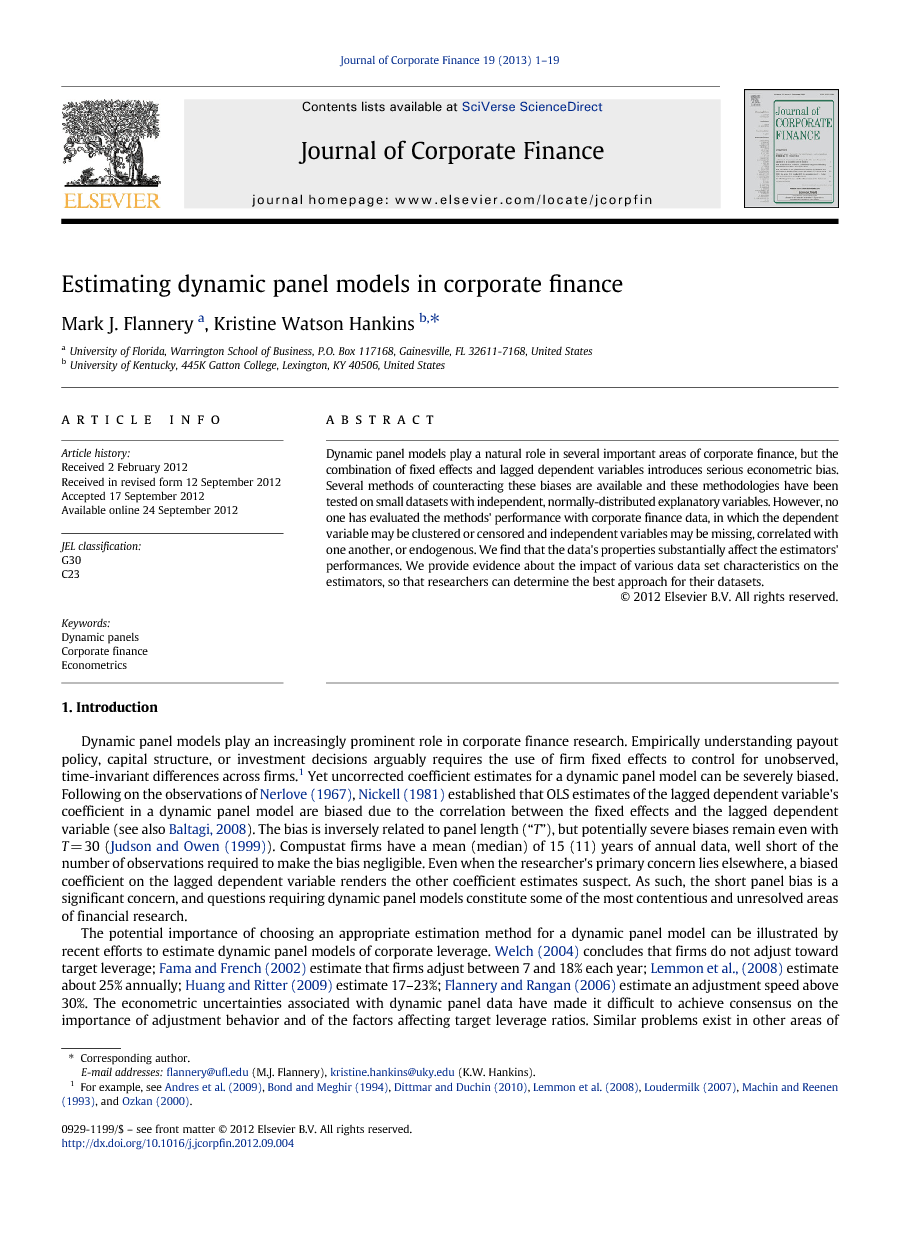 Dynamic panel models play a natural role in several important areas of corporate finance, but the combination of fixed effects and lagged dependent variables introduces serious econometric bias. Several methods of counteracting these biases are available and these methodologies have been tested on small datasets with independent, normally-distributed explanatory variables. However, no one has evaluated the methods' performance with corporate finance data, in which the dependent variable may be clustered or censored and independent variables may be missing, correlated with one another, or endogenous. We find that the data's properties substantially affect the estimators' performances. We provide evidence about the impact of various data set characteristics on the estimators, so that researchers can determine the best approach for their datasets.

Dynamic panel models play an increasingly prominent role in corporate finance research. Empirically understanding payout policy, capital structure, or investment decisions arguably requires the use of firm fixed effects to control for unobserved, time-invariant differences across firms.1 Yet uncorrected coefficient estimates for a dynamic panel model can be severely biased. Following on the observations of Nerlove (1967), Nickell (1981) established that OLS estimates of the lagged dependent variable's coefficient in a dynamic panel model are biased due to the correlation between the fixed effects and the lagged dependent variable (see also Baltagi, 2008). The bias is inversely related to panel length (“T”), but potentially severe biases remain even with T = 30 ( Judson and Owen (1999)). Compustat firms have a mean (median) of 15 (11) years of annual data, well short of the number of observations required to make the bias negligible. Even when the researcher's primary concern lies elsewhere, a biased coefficient on the lagged dependent variable renders the other coefficient estimates suspect. As such, the short panel bias is a significant concern, and questions requiring dynamic panel models constitute some of the most contentious and unresolved areas of financial research. The potential importance of choosing an appropriate estimation method for a dynamic panel model can be illustrated by recent efforts to estimate dynamic panel models of corporate leverage. Welch (2004) concludes that firms do not adjust toward target leverage; Fama and French (2002) estimate that firms adjust between 7 and 18% each year; Lemmon et al., (2008) estimate about 25% annually; Huang and Ritter (2009) estimate 17–23%; Flannery and Rangan (2006) estimate an adjustment speed above 30%. The econometric uncertainties associated with dynamic panel data have made it difficult to achieve consensus on the importance of adjustment behavior and of the factors affecting target leverage ratios. Similar problems exist in other areas of corporate finance research such as corporate governance (Wintoki et al., (2012)), cash management (Dittmar and Duchin (2010)), and investment financing (Bond et al., 2003), as well as growth and banking research. Of course, econometric techniques have evolved to correct these biases, including instrumental variables (IV), generalized method of moments (GMM) estimators, long differencing (LD), and bias correction formulae. These methods have been tested on small datasets, most of which have at most one, normally distributed independent variable. Yet corporate finance studies include multiple independent variables, of which many exhibit endogeneity and serial correlation. Therefore, an estimator's performance in simple Monte Carlo simulations may not apply to more complex empirical analysis. We examine the statistical properties of seven alternative methods for estimating dynamic panel models: OLS, standard fixed effects (FE) estimation, Arellano and Bond's (1991) difference GMM, Blundell and Bond (1998) system GMM, two variations of long differencing (Hahn et al., 2007, Huang and Ritter, 2009), and corrected least-squares (Kiviet, 1995, Bruno, 2005). By simulating data that resembles “real” corporate finance data, we evaluate the performance of these estimators under conditions that are likely to apply to corporate finance research topics. Our goal is to provide sufficient analysis that corporate empiricists can identify the estimation technique most appropriate to their data. The paper is organized as follows. Section 2 illustrates the importance of dynamic panel estimation biases in the context of firms' capital structure choices. Section 3 explains the econometric issues and describes existing methods for addressing them. Like Petersen (2009), we utilize Monte Carlo simulations to assess the performance of various estimators in different situations. Section 4 describes how we simulate datasets. In addition to a straightforward set of independent and identically distributed (iid) simulated datasets, we also simulate datasets using a variance–covariance structure generated from actual Compustat variables. Section 5 presents some initial results. First, we confirm that most of the proposed estimation methods yield reasonably accurate coefficient estimates when data and regression residuals are generated from iid error distributions. When the simulated explanatory variables mimic Compustat data, the estimated coefficient on the lagged dependent variable remains reliable, but estimation errors for some of the other explanatory variables' coefficients increase dramatically. In Section 6, we evaluate each estimator in the presence of common corporate data features, such as missing observations, unbalanced panel lengths, and dependent variable censoring. One estimation method (Kiviet's (1995) corrected least squares dependent variable, or LSDVC) emerges as the most accurate methodology across all these dataset conditions and Blundell and Bond's (1998) system GMM estimator is often the second best choice. Unfortunately, both have limitations. Not only does LSDVC's computer memory requirement make it difficult to apply in large datasets, it assumes exogenous regressors. Blundell Bond GMM (like Arellano Bond GMM) assumes an absence of second order serial correlation. In Section 7, we explore how violating these assumptions affects the performance of all seven estimators. Both endogenous regressors and second-order serial correlation seriously compromise many of the estimation methodologies, consistent with the theoretical literature. Perhaps surprisingly, these complications can be large enough that there are occasions when the much maligned fixed effects estimator performs best. Section 8 concludes by offering guidance about the best way to approach dynamic panel estimation in a corporate finance context.

This paper examines the performance of seven econometric methodologies for estimating dynamic panel models in “realistic” corporate finance datasets. We consider two methods whose results are thought to be generally biased (OLS and fixed effects (FE)), plus five “advanced” estimation methods (Arellano Bond (AB), Blundell Bond (BB), longest differencing (LD), four period differencing (LD4), and least squares dummy variable correction (LSDVC)). Although each of the advanced methodologies has been tested using simple Monte Carlo studies, this is the first paper to examine their accuracy under the sort of statistical conditions contained in large corporate finance databases such as unbalanced panels and endogenous regressors. We emphasize that the long difference estimators have been formally derived only for balanced panels, and that our implementations here (LD, LD4) should be considered preliminary. We find that the advanced estimators generally work as advertised in estimating the coefficient on a dynamic panel's lagged dependent variable when the independent variables are exogenous. Most of the estimators provide small root-mean squared errors (RMSEs) when estimating a dependent variable's persistence, regardless of the true value (high or low). As expected, OLS and FE do poorly, on average, in these estimations and FE is affected particularly by shorter panels. More noteworthy is the poor performance of LD4 when the dependent variable is highly persistent (γ = 0.8). LSDVC, AB, and BB have the lowest RMSE in estimating the lagged dependent variable and are reasonably accurate for the independent variables. FE often is the most accurate with respect to the exogenous variables, but exhibits much higher errors for the lag. While the preliminary analysis shows that LSDVC is the most accurate estimator across a range of data limitations, theory predicts that endogenous explanatory variables will reduce the quality of the LSDVC estimates. We find this to be true, but the damage is limited to the estimated coefficients on the endogenous variables: LSDVC remains accurate for the lagged dependent variable and exogenous regressors. FE exhibits low RMSE for the endogenous variables, but is not very accurate for the lagged dependent variable. BB is reliable regardless of the level of endogeneity or dependent variable persistence and should be the default choice under these conditions, particularly if the lag coefficient is of interest. We confirm theoretical predictions that AB and BB perform worse when the true model's residuals exhibit second-order serial correlation but the change is not dramatic. The increased estimation error is most apparent for the lagged dependent variable's coefficient; the explanatory variables' RMSEs are largely unaffected. Somewhat surprisingly, FE provides the most accurate estimates in the presence of second-order serial correlation, with BB a close second. The BB estimates sometimes outperform FE (estimating a highly persistent lag coefficient), are unaffected by panel imbalance, and are consistent across a range of endogeneity in the presence of serial correlation. While LSDVC is the most accurate estimator in the absence of endogenous independent variables and second order serial correlation, BB and FE are the most accurate estimators when those complications exist. BB is more affected by dependent variable clustering at zero and second order serial correlation and FE performs poorly in short (or unbalanced) panels and is sensitive to highly persistent data. Across the “Compustat” type explanatory variables, estimation errors are inversely related to the variances of the variables' innovations, which vary substantially. The estimated coefficients on explanatory variables with the largest innovation variances have RMSEs similar to those on independent, normally-distributed independent variables. However, the RMSEs for lower-variance Compustat variables can be an order of magnitude larger. Although these RMSEs decline as panel length increases, the estimation errors remain larger even for panels that are 30-years long. This finding suggests that researchers should examine an explanatory variables' within-firm variance before assessing its economic effect on the dependent variable in a dynamic panel model. Clearly, we have not evaluated dynamic panel model estimation techniques under all conceivable conditions. However, the simulation results reported here should assist corporate finance researchers in estimating such models. Many of the problematic dataset properties can be identified through tests (endogeneity, serial correlation) or by inspection (variable value clustering, short panels). Combined with a dataset's known characteristics, the results of this paper can guide empiricists working with dynamic panels.