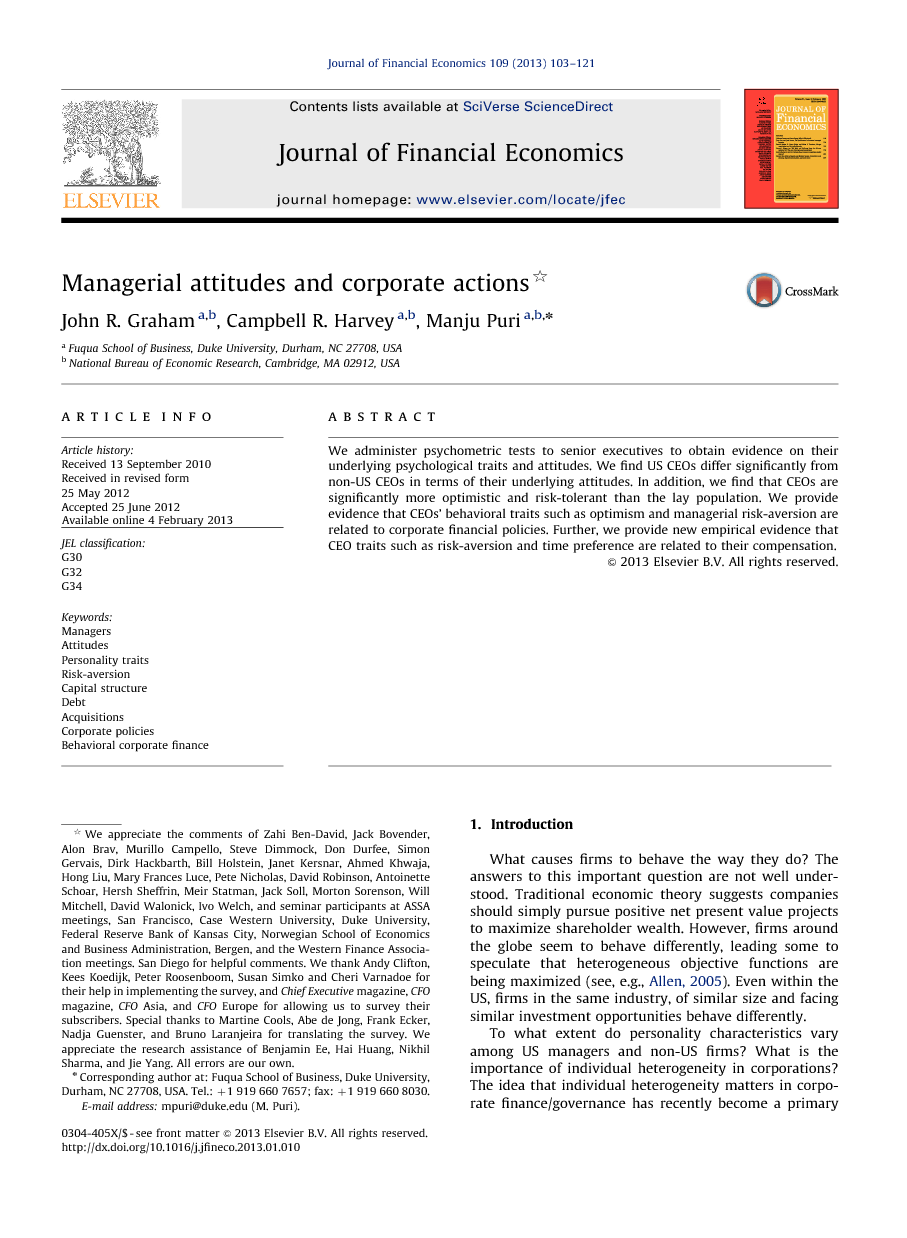 We administer psychometric tests to senior executives to obtain evidence on their underlying psychological traits and attitudes. We find US CEOs differ significantly from non-US CEOs in terms of their underlying attitudes. In addition, we find that CEOs are significantly more optimistic and risk-tolerant than the lay population. We provide evidence that CEOs' behavioral traits such as optimism and managerial risk-aversion are related to corporate financial policies. Further, we provide new empirical evidence that CEO traits such as risk-aversion and time preference are related to their compensation.

We examine how US CEOs differ from the lay population, CFOs, and non-US chief executives. We assemble a unique database on sitting business executives in which we assess managers' personality traits and attitudes using well-established methods that have been validated in psychology and experimental economics as providing a good gauge of peoples' attitudes. Our psychometric survey not only quantifies behavioral traits of senior managers but also gathers information related to the career path, education, and demographic characteristics of the managers. We offer evidence that CEOs differ from both the lay population and CFOs. Interestingly, US-based CEOs also differ in significant ways from their non-US counterparts, both in terms of career paths and attitudes, tending to be more optimistic and less risk-averse, among other things. These differences in attitudes suggest one possible explanation for why US firms behave in some ways quite differently from non-US firms. We focus on the two corporate decisions that CEOs feel they have the most control over-acquisitions and capital structure. We find evidence that links psychological traits such as risk-aversion and optimism to corporate policies, in ways advocated by some theories. For example, more risk-tolerant CEOs make more acquisitions and more optimistic CEOs use more short-term debt. We also find an empirical link between managerial traits such as risk-aversion with compensation structure, and pay-performance sensitivity. This result is consistent with the theoretical work from standard agency theory but direct evidence on this has been scarce. We also find that managerial impatience and time preference also affect their compensation structure in a way that might be expected by theory but which has received little attention. Our results provide new evidence of a role for specific behavioral traits, in particular, risk-aversion and time-preference in the determination of compensation structure.