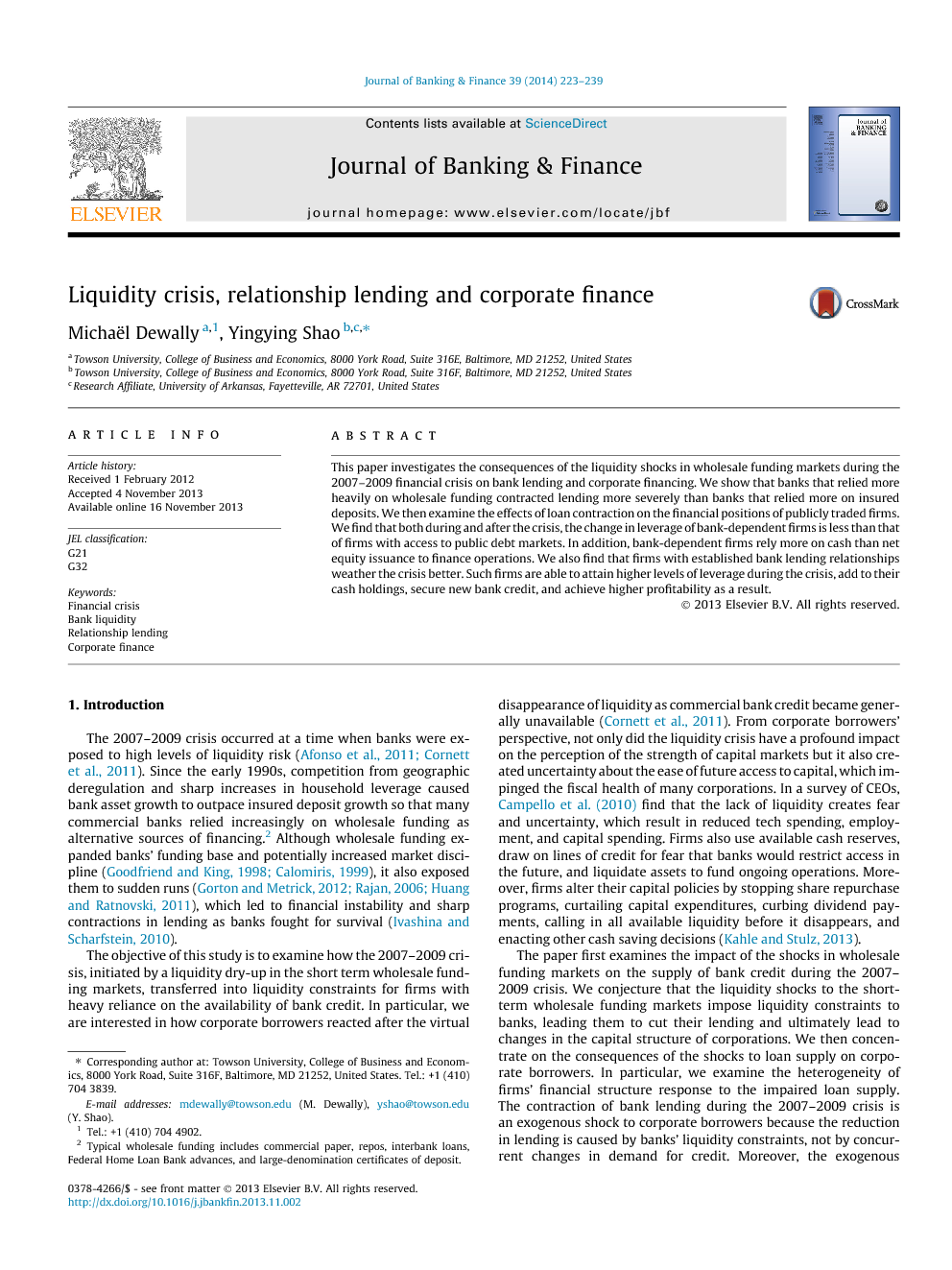 This paper investigates the consequences of the liquidity shocks in wholesale funding markets during the 2007–2009 financial crisis on bank lending and corporate financing. We show that banks that relied more heavily on wholesale funding contracted lending more severely than banks that relied more on insured deposits. We then examine the effects of loan contraction on the financial positions of publicly traded firms. We find that both during and after the crisis, the change in leverage of bank-dependent firms is less than that of firms with access to public debt markets. In addition, bank-dependent firms rely more on cash than net equity issuance to finance operations. We also find that firms with established bank lending relationships weather the crisis better. Such firms are able to attain higher levels of leverage during the crisis, add to their cash holdings, secure new bank credit, and achieve higher profitability as a result.

We investigate the impact of the liquidity shock on banks’ lending during the 2007–2009 crisis and the attending impact on corporate capital structure. While the use of wholesale funding plays a positive role in providing alternative capital to finance loan issuance and helps increase banks’ lending during normal time, its reliance harmed credit availability in the banking system during the crisis by exposing banks to sudden liquidity shocks. We find a significant reduction in lending related to bank’s exposure to the wholesale funding market, especially for smaller banks. The contraction of bank credit affected borrowers’ financial structure. We find that during and after the crisis, the leverage ratio of bank-dependent firms increases significantly less than that of firms with access to the public bond market. Faced with credit constraints, bank-dependent firms choose to deplete their cash holdings to substitute for impaired bank debt rather than issuing external equity. We also document that lending relationships play a positive role in alleviating the adverse impact of impaired credit supply. We see that firms with established lending relationships are able to attain a higher level of leverage during the crisis, are able to preserve and add to their cash holdings, are able to secure new bank credit, and showcase higher profitability as a result. Our findings provide policy implications for the role of wholesale funding market to banks’ liquidity management and credit supply. The fact that bank-dependent firms experience significant changes in their financial structure suggests that the fluctuations in wholesale funding markets can trigger liquidity crisis not only in the banking system, but also to the real sector by affecting firm’s access to credit. The policymakers should consider the role on interbank capital markets in banks’ liquidity management and evaluate their effects on the credit supply.