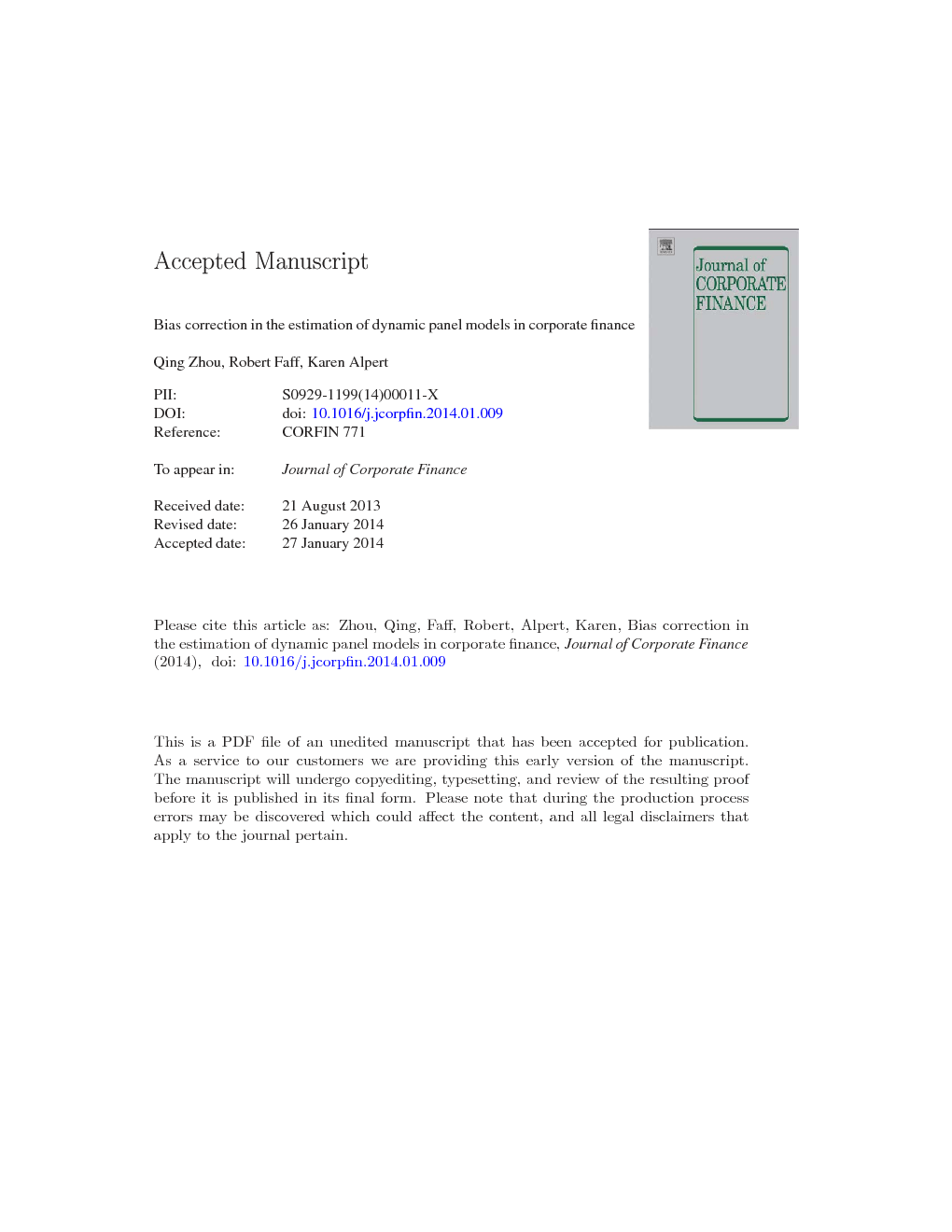 Dynamic panel models play an increasingly important role in numerous areas of corporate finance research, and a variety of (biased) estimation methods have been proposed in the literature. The biases inherent in these estimation methods have a material impact on inferences about corporate behavior, especially when the empirical model is misspecified. We propose a bias-corrected global minimum variance (GMV) combined estimation procedure to mitigate this estimation problem. We choose the capital structure speed of adjustment (SOA) setting to illustrate the proposed method using both simulated and actual empirical corporate finance data. The GMV estimator non-trivially reduces bias and hence meaningfully increases the reliability of inferences based on parameter estimates. This method can be readily applied to many other corporate finance contexts.

A number of techniques have become increasingly popular in corporate finance research (e.g., dynamic structure modeling and quasi- experimentation). While each of these major new approaches has been shown to provide novel insights, inevitably they all have some form of limitation. Dynamic panel bias,1 endogeneity issues, empirical model misspecification, and other potential corporate data issues (both separately and in combination) can introduce severe biases into existing baseline estimations, which cast serious doubt over the credibility of the inferences drawn regarding corporate decision making. Despite such issues, inference in corporate finance research is likely to continue to rely heavily on cross-sectional regressions, with dynamic panel models playing an increasingly prominent role (Flannery and Hankins, 2013 and Wintoki et al., 2012). To address the well-known difficulties relating to the identification of parameters in corporate dynamic panel models (e.g., Flannery and Hankins, 2013 and Huang and Ritter, 2009), we propose a bias-corrected minimum variance combined estimation procedure. Moreover, we use various statistical specifications to evaluate the performance of this method in an empirically meaningful manner for corporate finance research. Following the lead of several recent studies of corporate finance methodology (e.g., Flannery and Hankins, 2013 and Strebulaev and Whited, 2012), we choose capital structure as the research context in which to illustrate our approach. We make this choice, not only because of the prominence and familiarity of capital structure within corporate finance research, but also because of the longstanding and widespread recognition of the challenge of reliably estimating the speed of adjustment (SOA) for leverage in dynamic panel models.2 Indeed, capital structure represents a mature research area that can substantially benefit from the bias correction methods that we advocate. While we ground our study in the specific area of SOA estimation, we aim to establish a generally applicable framework and thereby contribute to a broad range of corporate finance studies which share in common inherently dynamic questions, featuring endogenous variables, and that are subject to non-trivial model misspecification. Furthermore, we extend our study to compute a consensus SOA estimate derived from a diverse set of popular extant estimators. SOA-related research is controversial. The partial adjustment model itself could be misspecified (Chang and Dasgupta, 2009, Hovakimian and Li, 2011 and Iliev and Welch, 2010) and thus can spuriously favor the adjustment hypothesis. However, there are also studies supporting the partial adjustment model (e.g., Liu, 2009). Therefore, whether and to what extent firms actually adjust leverage to a target is still an open question, and thus, uncovering the underlying economic force is of primary importance to capital structure researchers (Graham and Leary, 2011). But, there is no logical reason to dismiss any given research stream, since it is very likely that each and every method can provide some incremental insights despite their respective limitations (Hennessy, 2013). Undeniably, recent advances in corporate finance research, such as dynamic structure modeling and natural experiments, can mitigate endogeneity and causal inference problems. Nevertheless, the existing dynamic modeling literature is primarily theoretical, and the related models have not yet been thoroughly tested (Welch, 2013). Moreover, high-quality, credible natural experiments are extremely difficult to identify in corporate finance (Strebulaev and Whited, 2013). As a consequence, the reduced-form dynamic panel model remains a critically important tool for testing and drawing inferences in corporate finance research. We contribute to the broader literature by providing a readily implementable alternative method for solving the bias estimation problem in realistic corporate settings. In these contexts, endogenous regressors, unbalanced panels, and the potential misspecification of empirical models collectively are formidable obstacles to many interesting question-driven investigations. Our study is the first to examine the performance of bias-correction methods under various conditions typically encountered in corporate datasets. Our objective is to provide new insights from a different perspective, backed up by meaningful analyses aimed at enhancing the toolkit available to corporate empiricists. Our paper proceeds as follows. Section 2 briefly reviews SOA estimation in a partial adjustment framework. Section 3 addresses the materiality of bias in the estimated SOA, formulating and applying a general, simulation-based bias correction method as a solution. Section 4 further investigates the proposed method using an actual empirical sample of corporate finance data. Section 5 provides a broader discussion, while Section 6 concludes the paper.

Empirical corporate finance panel datasets are limited in the time dimension. As a result, dynamic panel bias is a serious issue in estimations using the types of models that are designed to address many currently unanswered corporate finance questions. Our study is the first investigation in the field of corporate finance to illustrate which situations produce levels of bias that are detrimental to economic inferences regarding corporate behavior and to examine the severity of dynamic panel bias when it is combined with model misspecification bias. Using a two-step procedure, we correct for the bias inherent in existing panel data estimation methods and then combine the corrected estimates using the GMV procedure to produce an efficient, unbiased estimator. We evaluate the performance of the proposed bias correction method and minimum variance combined estimation procedure in the context of a widely-researched capital structure question, namely, the SOA estimation in the partial adjustment model. As demonstrated in simulation analysis, our bias-corrected, minimum-variance combined estimation method provides more accurate estimates with a negligible bias, thus, leading to reliable economic inferences. We also include a discussion on generalizing our methods to many other areas of corporate finance research. Our results demonstrate that although the absolute magnitudes of estimation errors caused purely by dynamic panel biases are clearly evident, these types of biases generally do not induce economically important effects on inferences regarding SOA unless the true speed of adjustment is close to 0. In this scenario, baseline and bias-corrected estimates produce the same conclusions regarding leverage adjustment speed. However, under more realistic conditions involving endogenous variables and misspecified leverage dynamics, all six of the examined baseline estimates (OLS, FE, AB, BB, LD4, and LSDVC) are severely biased, and these biases are detrimental to the accuracy of economic inferences regarding corporate behavior. More importantly, monotonic relationships between these biases and true SOA values are not evident in situations featuring potential model misspecification. In these situations, the six bias-corrected estimates are not only more accurate than their corresponding baseline estimates but also produce negligible biases despite the presence of model misspecification, endogeneity, imbalanced panels, and missing data. The inferences derived from bias-corrected estimates are consistent with the conclusions obtained using true SOA values. The big advantage of our estimation method is that it can be used to reduce the biases of numerous alternative estimation methods. Moreover, the resulting bias-corrected estimators can retain some of the advantages presented by their corresponding initial estimators. For instance, it is well established that conventional least squares estimation procedures (such as OLS and FE) exhibit very little dispersion relative to many consistent estimators. More importantly, the proposed bias-correction approach is not computationally taxing for corporate dynamic panel models. As indicated by our simulations, all six of the examined estimation methods have small variance when using realistic corporate data; thus, a small number of simulated paths suffice for the accurate calibration of the bias function required for bias correction. Our study is the first to discuss the intricacies of bias correction in a corporate finance setting. Moreover, our proposed minimum-variance combined estimation procedure is readily applicable to many other corporate finance questions in which empirical researchers are confronted with divergent estimates and competing theories or models. Exploring such broad applications is left to future research.