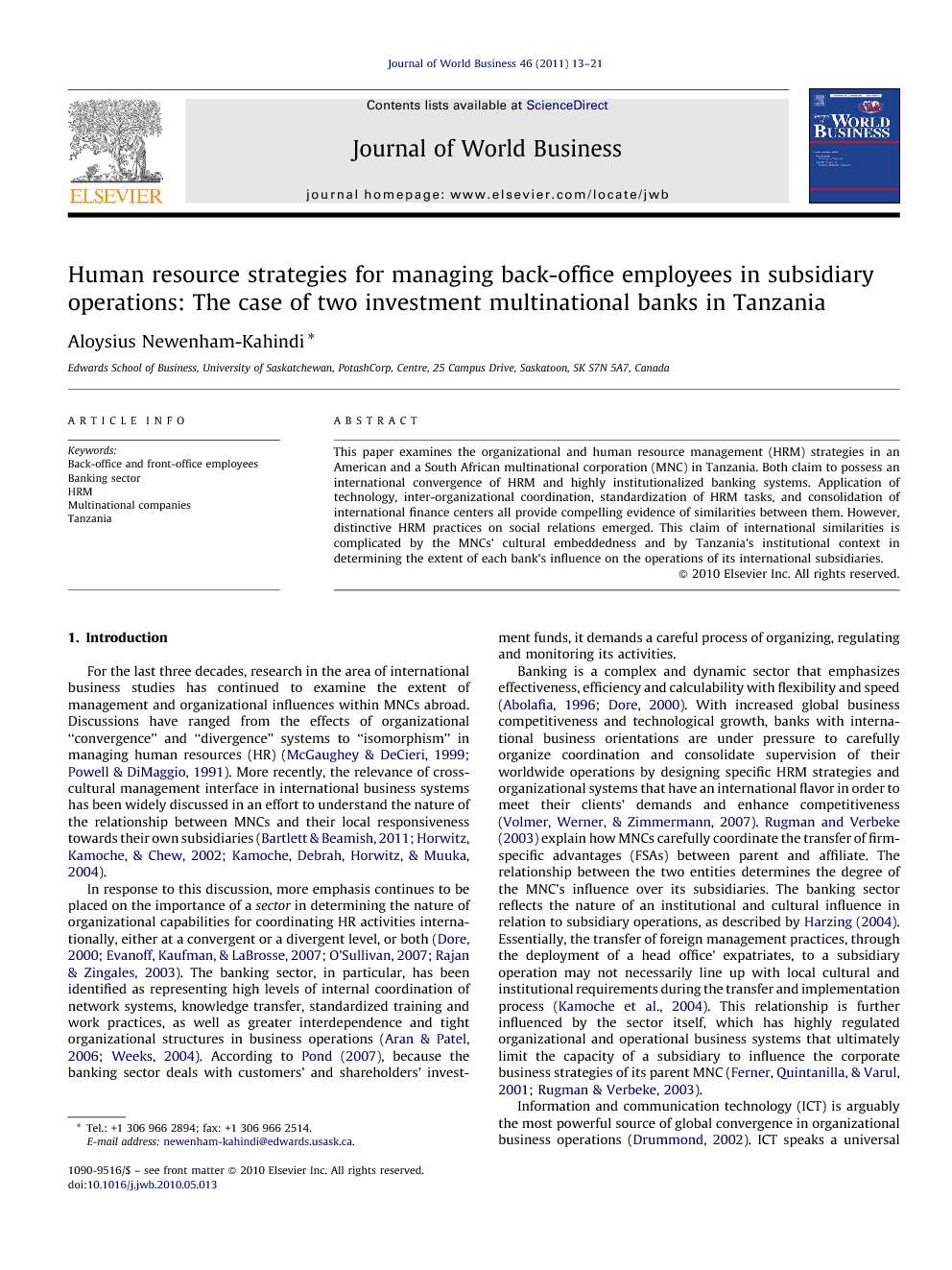 This paper examines the organizational and human resource management (HRM) strategies in an American and a South African multinational corporation (MNC) in Tanzania. Both claim to possess an international convergence of HRM and highly institutionalized banking systems. Application of technology, inter-organizational coordination, standardization of HRM tasks, and consolidation of international finance centers all provide compelling evidence of similarities between them. However, distinctive HRM practices on social relations emerged. This claim of international similarities is complicated by the MNCs’ cultural embeddedness and by Tanzania's institutional context in determining the extent of each bank's influence on the operations of its international subsidiaries.

For the last three decades, research in the area of international business studies has continued to examine the extent of management and organizational influences within MNCs abroad. Discussions have ranged from the effects of organizational “convergence” and “divergence” systems to “isomorphism” in managing human resources (HR) (McGaughey and DeCieri, 1999 and Powell and DiMaggio, 1991). More recently, the relevance of cross-cultural management interface in international business systems has been widely discussed in an effort to understand the nature of the relationship between MNCs and their local responsiveness towards their own subsidiaries (Bartlett and Beamish, 2011, Horwitz et al., 2002 and Kamoche et al., 2004). In response to this discussion, more emphasis continues to be placed on the importance of a sector in determining the nature of organizational capabilities for coordinating HR activities internationally, either at a convergent or a divergent level, or both ( Dore, 2000, Evanoff et al., 2007, O'Sullivan, 2007 and Rajan and Zingales, 2003). The banking sector, in particular, has been identified as representing high levels of internal coordination of network systems, knowledge transfer, standardized training and work practices, as well as greater interdependence and tight organizational structures in business operations ( Aran and Patel, 2006 and Weeks, 2004). According to Pond (2007), because the banking sector deals with customers’ and shareholders’ investment funds, it demands a careful process of organizing, regulating and monitoring its activities. Banking is a complex and dynamic sector that emphasizes effectiveness, efficiency and calculability with flexibility and speed (Abolafia, 1996 and Dore, 2000). With increased global business competitiveness and technological growth, banks with international business orientations are under pressure to carefully organize coordination and consolidate supervision of their worldwide operations by designing specific HRM strategies and organizational systems that have an international flavor in order to meet their clients’ demands and enhance competitiveness (Volmer, Werner, & Zimmermann, 2007). Rugman and Verbeke (2003) explain how MNCs carefully coordinate the transfer of firm-specific advantages (FSAs) between parent and affiliate. The relationship between the two entities determines the degree of the MNC's influence over its subsidiaries. The banking sector reflects the nature of an institutional and cultural influence in relation to subsidiary operations, as described by Harzing (2004). Essentially, the transfer of foreign management practices, through the deployment of a head office’ expatriates, to a subsidiary operation may not necessarily line up with local cultural and institutional requirements during the transfer and implementation process (Kamoche et al., 2004). This relationship is further influenced by the sector itself, which has highly regulated organizational and operational business systems that ultimately limit the capacity of a subsidiary to influence the corporate business strategies of its parent MNC (Ferner et al., 2001 and Rugman and Verbeke, 2003). Information and communication technology (ICT) is arguably the most powerful source of global convergence in organizational business operations (Drummond, 2002). ICT speaks a universal language that is capable of influencing internal organizational systems, standardizing activities, coordinating business operations efficiently and influencing the behavior of those who perform the activities (Kunda, 1992). The application of technology has created a structural convergence in banking whereby work systems can be easily organized, systematically standardized and constantly monitored. Technology has placed new demands on organizational configurational systems, including the normalization of activities in organizations, instituting the power of regulation, coordination and discipline between front-office and back-office workers (see Wickham, 1997 and Zuurmond, 2005), and the ability to integrate work systems into delivery operational systems (Callaghan and Thompson, 2001 and Sewell, 1998).

This paper has examined the internal organizational systems and the practice of managing human resource strategies in multinational corporations in subsidiary operations in Tanzania. The aim of this paper was to explore the way the organizational systems of MNC banks interacted with and influenced the host nation’s environment’ in order to implement specific HRM strategies in the MNCs’ subsidiary business operations. Also, the paper set out to examine the extent of ICT influences on the design of work and employees’ compliance behavior in workplace. The research conducted in both banks revealed how the two MNCs transferred their head office organizational systems and HRM strategies into their subsidiary operations in Tanzania. Our data revealed the extent to which the banking sector was significantly influenced by the mix of global market forces, which drove the need for cross-border integration and coordination of activities. Another driver was found in the nature of the local customers and the host nation’s efforts to influence their behavior in managing human resource strategies. Technology was found to have a significant influence on work coordinationand the behavior of front-office and back-office employees. In this regard, our research showed that both banks managed to highly centralize their organizational system through the use of ICT. Such a networked organizational structure enabled the convergence of organizational systems and the monitoring of financial activities and employees from the head offices. However, the divergences in bothbanks(withrespecttothesocializationprocessesandcultural functions with respect to HRM practices) revealed the limitation of the convergence view within the banking sector. Thus, the concept of the two MNCs representing international HRM and organiza- tional best practices within the same sector seemed unachievable.