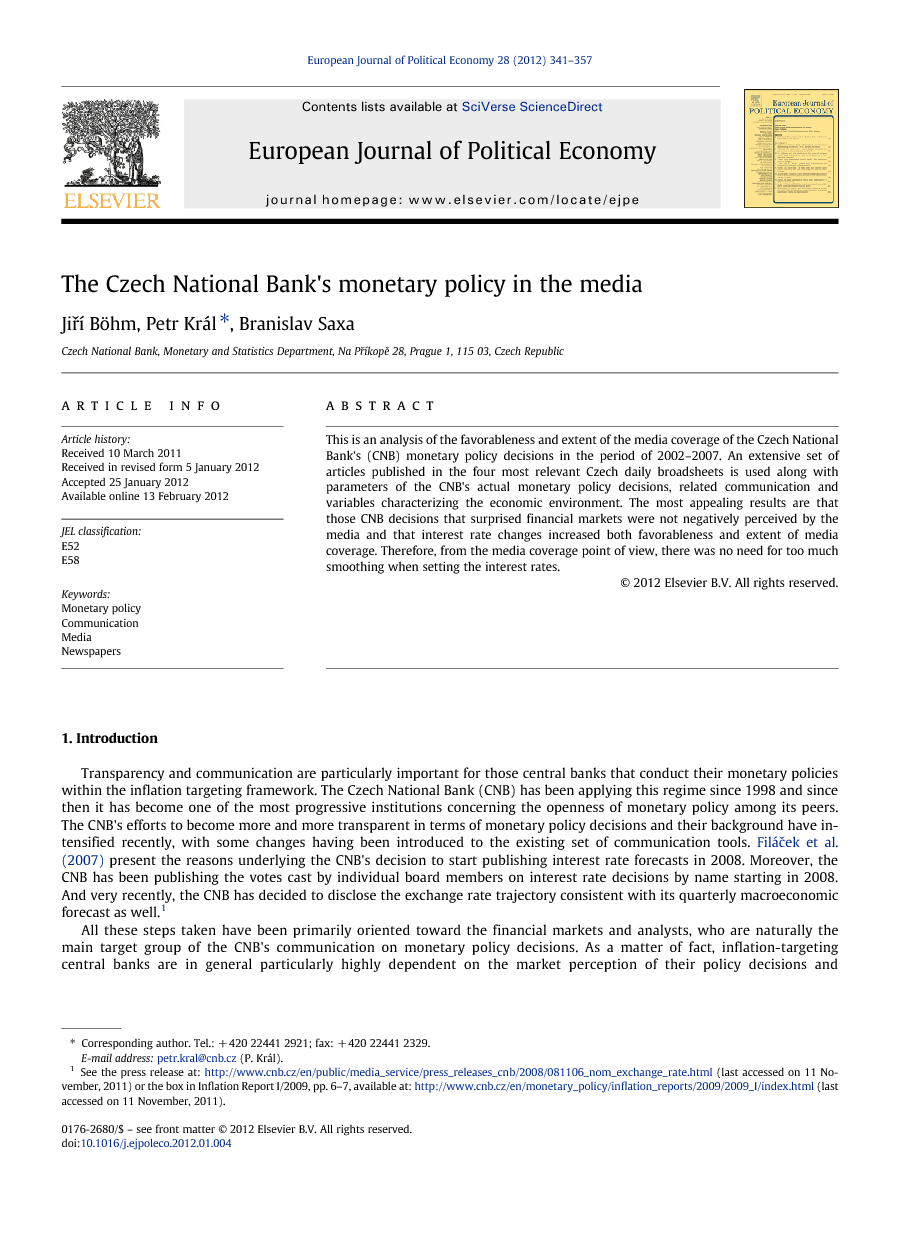 This is an analysis of the favorableness and extent of the media coverage of the Czech National Bank's (CNB) monetary policy decisions in the period of 2002–2007. An extensive set of articles published in the four most relevant Czech daily broadsheets is used along with parameters of the CNB's actual monetary policy decisions, related communication and variables characterizing the economic environment. The most appealing results are that those CNB decisions that surprised financial markets were not negatively perceived by the media and that interest rate changes increased both favorableness and extent of media coverage. Therefore, from the media coverage point of view, there was no need for too much smoothing when setting the interest rates.

Transparency and communication are particularly important for those central banks that conduct their monetary policies within the inflation targeting framework. The Czech National Bank (CNB) has been applying this regime since 1998 and since then it has become one of the most progressive institutions concerning the openness of monetary policy among its peers. The CNB's efforts to become more and more transparent in terms of monetary policy decisions and their background have intensified recently, with some changes having been introduced to the existing set of communication tools. Filáček et al. (2007) present the reasons underlying the CNB's decision to start publishing interest rate forecasts in 2008. Moreover, the CNB has been publishing the votes cast by individual board members on interest rate decisions by name starting in 2008. And very recently, the CNB has decided to disclose the exchange rate trajectory consistent with its quarterly macroeconomic forecast as well.1 All these steps taken have been primarily oriented toward the financial markets and analysts, who are naturally the main target group of the CNB's communication on monetary policy decisions. As a matter of fact, inflation-targeting central banks are in general particularly highly dependent on the market perception of their policy decisions and communication.2 A credible, accountable and transparent central bank should, however, also take account of the general public's perception of its monetary policy decisions.3 Unlike the sophisticated audience (markets, analysts), which is directly influenced by announcements made by the central bank (available, for example, on its web site), the general public is indirectly reached by the bank primarily through the media. The media's perception of monetary policy decisions and communication is thus important for the extent and quality of the central bank's influence on the general public and people's view of the credibility of the bank's monetary policy. Inversely, from the general public's point of view, monetary policy reflection in the media is undoubtedly crucial for assessing the role the central bank plays in the country's macroeconomic and monetary developments. Taking the aforementioned into account, we find it appropriate and useful to take a look back at the media's perception of the CNB's monetary policy decisions in the period of 2002–2007. In doing so, we closely follow the methodological approach suggested by Berger et al. (2011), which can be considered pioneering work in this research area. In other words, our study is a national application of their novel multi-country oriented research and both their approach and their results serve as an obvious benchmark for us. The above-mentioned time period seems very convenient for the purposes of our research, its results and their interpretation for at least two reasons. First, that period of time was characterized by quite smooth economic developments (see basic facts and figures on the past Czech economic developments in the Appendix, Fig. A.1) And second, in the above-mentioned period there were no major regime changes in either the conduct of the CNB's monetary policy (stable inflation targeting framework with forward-looking monetary policy reaction function incorporated in the forecasting model) or its communication (the initial level of transparency set in 1998–2002 prevailed roughly unchanged until 2008 where important steps substantially increasing transparency started to be taken).4 The improvements in communication recently made in the CNB's communication – despite being oriented toward a rather sophisticated audience – could have somehow modified the pattern of the CNB's reflection in the media. From this point of view, it will be interesting to see how the results of potential future research on the topic will be influenced by including the communication changes made as well as the global financial and economic crisis and related negative tone recently prevailing in the media's reporting of economic events. To unwrap our major results in brief, we can list the following. First, the media did not perceive negatively the fact that the CNB from time to time surprised financial markets with its interest rate decisions. And in turn, such decisions attracted the attention of the media, which led to more/longer/title page articles. And second, interest rate changes regardless of their direction were appreciated by and deserved special attention of the media. This is in our view the most appealing result of our research indicating that from the media coverage point of view there was no need for too much smoothing in interest rate setting. As a matter of fact, monetary policy decision makers usually smooth interest rates when setting them in reaction to economic developments. As mentioned for instance by Woodford (2003), interest rate changes typically occur through a series of small adjustments in the same direction with only rare reversals of directions.5 By doing so, central bankers aim at avoiding instability in financial markets and limit the number of large policy rate changes that could lead to a loss in credibility. As we see it, the extent of any central bank (including the CNB) boards' inclination to smoothing might be in this respect increased by its worries that big and frequent interest rate changes could potentially be negatively reflected in the media. These considerations, however, proved to be groundless based on the results of our research. The remainder of the paper is organized as follows. The second section provides an overview of literature relevant to the topic of our research. The third section describes the data used and defines the variables we employ to characterize the media's coverage of the CNB Board's decisions on interest rate settings. The fourth section displays the results of our estimations, interprets them and discusses robustness issues. The last section summarizes and concludes.

In our paper we identify factors explaining the variability of the favorableness and the extent of coverage of the CNB's monetary policy decisions in the media in the period of 2002–2007. We make use of an extensive set of articles published on the days immediately following monetary policy meetings in the four most relevant Czech daily broadsheets. We find that very positive and very negative articles tended to be longer than neutral ones. Simultaneously, more dispersed favorableness across articles was associated with more extensive coverage. When summing up our major fundamental results concerning favorableness of coverage, we can conclude the following. The fact that the CNB from time to time surprised the market when setting interest rates was perceived neutrally in the media, which might be interpreted as indicating that the media had got used to the fact that surprise belongs to the standard monetary policy making of (not only) the CNB. The media appreciated it when the CNB made changes to interest rates regardless of the direction of change. Thus, the media probably understood that such changes were intended and needed to rein in inflation or steer it toward the target and to smooth economic shocks. Intensity of CNB's inter-meeting communication proxied by the number of bank board member statements proved to have had a statistically significant negative effect on the favorableness of perception of the actual outcome of the subsequent meeting if intensive communication had preceded a surprising decision.22 The media did not like rising inflation (and conversely it liked disinflation), which was probably perceived as a failure by the CNB to fulfill its commitment. Similarly to inflation, the media liked accelerating GDP growth (and did not like slowing growth), which is quite understandable and intuitive.23 Appreciation of the koruna exchange rate seems to have been negatively perceived in the media regardless of the actual level of the exchange rate vis-à-vis its trend. Inversely, depreciation of the exchange rate increased the favorableness of articles covering the CNB's meetings. As for the extent of media coverage we found the following. Despite being perceived neutrally, an unexpected CNB interest rate decision generally attracted the attention of the media. Similarly, interest rate changes – irrespective of their direction – were in principle extensively covered in the media, unlike decisions leaving interest rates unchanged. Intensity of inter-meeting communication proved to have had a statistically significant effect on the extent of coverage of the interest rate decision only in the following special cases. First, higher communication intensity by bank board members led to an increased probability that the article covering the subsequent monetary policy decision would be displayed on the title page of the dailies reporting on it. And second, more intensive communication expanded the extent of coverage at times of heightened uncertainty. It is favorable that the release of a new quarterly macroeconomic forecast attracted the attention of the media. As for macroeconomic variables, recent CPI inflation data did not significantly influence the extent of coverage. A decline in GDP growth was, however, associated with more extensive coverage. Based on our results, it is clear that volatility of the exchange rate was a good reason to write about the CNB's monetary policy meetings. This might be because the exchange rate influenced a lot of economic variables in the Czech economy, hence it was naturally a subject of public debate and that debate was mirrored in the media. All in all,24 we can argue that the factors that turned out to be significant for favorableness, its dispersion and the extent of coverage of the CNB's decisions suggest that media understood in general, although not in all aspects, what the CNB usually did in the field of monetary policy and why it did it, and paid proper attention to its decisions where appropriate. In our view, the most appealing results are that those CNB decisions that surprised financial markets were – if needed – not negatively perceived by the media and that the media on the contrary appreciated interest rate changes regardless of their direction (interest rate changes increased both favorableness and extent of media coverage). Therefore, from the media coverage point of view, there was no need for too much smoothing in setting the interest rates.