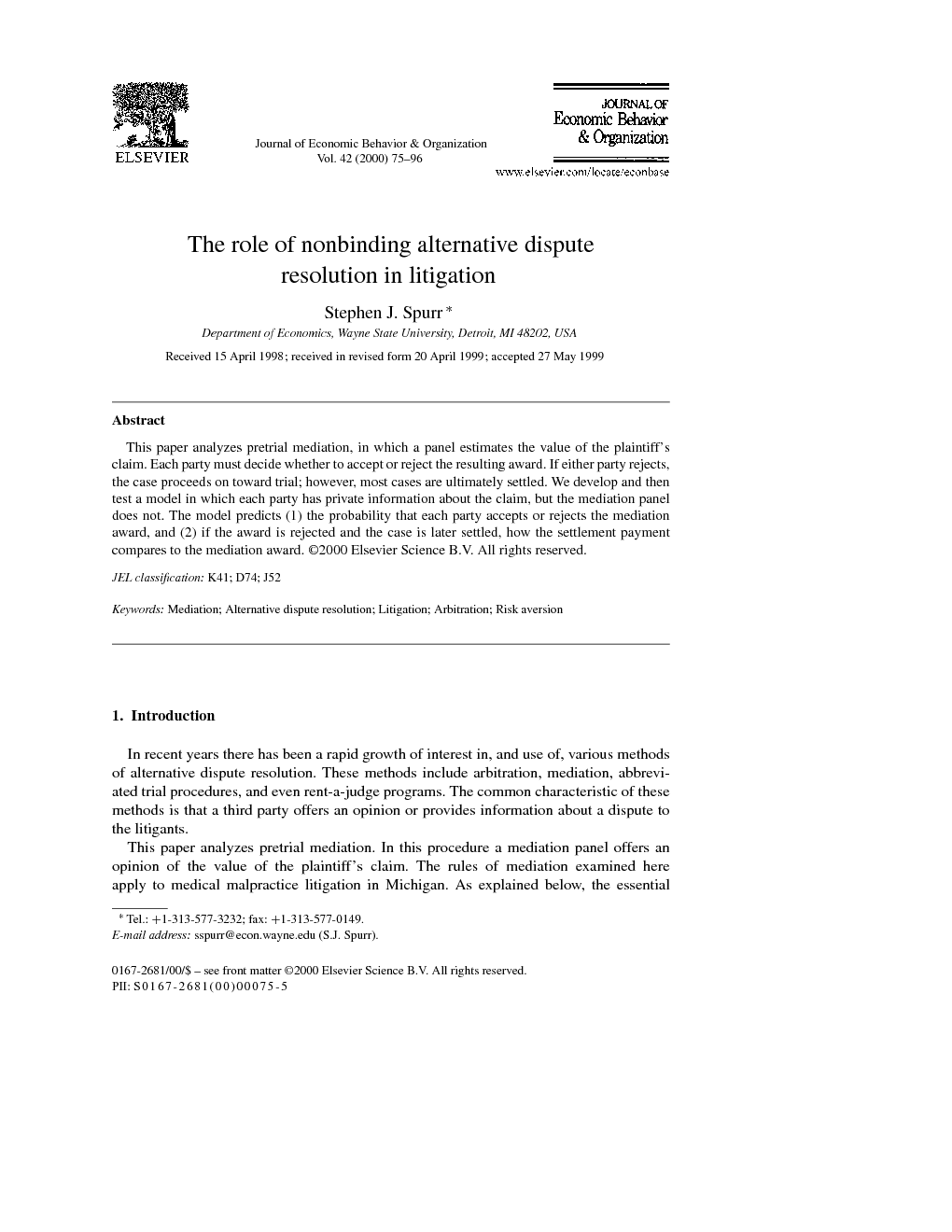 This paper analyzes pretrial mediation, in which a panel estimates the value of the plaintiff’s claim. Each party must decide whether to accept or reject the resulting award. If either party rejects, the case proceeds on toward trial; however, most cases are ultimately settled. We develop and then test a model in which each party has private information about the claim, but the mediation panel does not. The model predicts (1) the probability that each party accepts or rejects the mediation award, and (2) if the award is rejected and the case is later settled, how the settlement payment compares to the mediation award.

This paper develops a model in which the parties to a lawsuit each have private information about the value of the claim. Each party must decide whether to accept the award of a mediation panel (which makes its decision without such information), or instead proceed on toward trial. In making this decision, each party takes into account the possibility of paying or being paid a penalty which is imposed on a party who makes an unwarranted rejection of the mediation award. Since we intend to test the model against data from Michigan, the model incorporates the rule of Michigan law which imposes this penalty. Given the costs of litigation, the model predicts the probability of each permutation of possible responses of the parties to the mediation award, and the distribution of expected court awards for each possible response. We then compare the predictions of the model to the data. We make the strong, but not unreasonable, assumption that the amount paid in settlement represents the expected value of the claim in litigation. If, however, one of the parties would be liable for costs in the event of litigation, we further assume that this potential liability is reflected in the settlement. The model performs quite well in some respects but not in others. In general, we find that the data depart from the model because of asymmetries in favor of the defendant. Plaintiffs accept the mediation award far more often than defendants. In addition, defendants obtain settlements more favorable than a mediation award they accepted more than twice as often as plaintiffs do. Of all the possible explanations for these results, the most promising candidates are that (1) plaintiffs are much more risk-averse than defendants, or (2) since lawyers for plaintiffs, but not those for defendants, work under a contingent fee agreement, they have a greater incentive to encourage their clients to accept the mediation award. One reason why defendants might be less risk-averse than plaintiffs is moral hazard; in cases where a defendant physician has the right to control the litigation, he can make decisions without having to bear the consequences, which will be visited on his insurance company. Another asymmetry in the results arises because defendants tend to do better than plaintiffs in the settlements of cases in which they have previously rejected the mediation award. While this might be explained by factors (1) or (2), it could also reflect the fact that defendants, but not plaintiffs, have an incentive to manipulate the mediation process, simply because the threat of sanctions for rejecting the mediation award is more significant to defendants than it is to plaintiffs. Finally, in a comparison of trial verdicts and mediation awards, set forth in Table 4, we found that plaintiffs generally did worse at trial than they did in settlement agreements, relative to the mediation award. One possible explanation is that defence lawyers are more apt to underachieve at the mediation hearing in cases which they believe are most likely to go to trial, in order to avoid the penalty for an unwarranted rejection of the mediation award. Table 4 also shows that in 70 percent of the cases where the plaintiff is liable for the penalty, there is no recovery, making it unlikely that the defendant will be able to collect the penalty. In addition, the table shows that it is not especially unusual for the plaintiff to obtain a positive recovery that is less than the mediation award. This suggests that either (1) claims that go to trial are greatly overvalued by mediation panels, or (2) the courts are apt to award the plaintiff something like the expected value of his claim rather than full damages, as would be required by a literal interpretation of the law. Our model does not allow for differences in risk preferences, agency problems, or for difficulties in collecting from a party the penalty for collecting the mediation award. Consequently this model cannot explain the asymmetries in the data described above. The contribution of our model is that it offers an explanation for those cases in which the party obtains a settlement on terms more favorable than those he has already accepted in mediation. According to the model, this outcome occurs not because new information has come to light, but rather because the settlement reflects the penalty that would be imposed on the party who rejected the mediation award. However, the principal contribution of this paper is in showing how the data depart from the predictions of the model, and considering the possible reasons for those deviations.