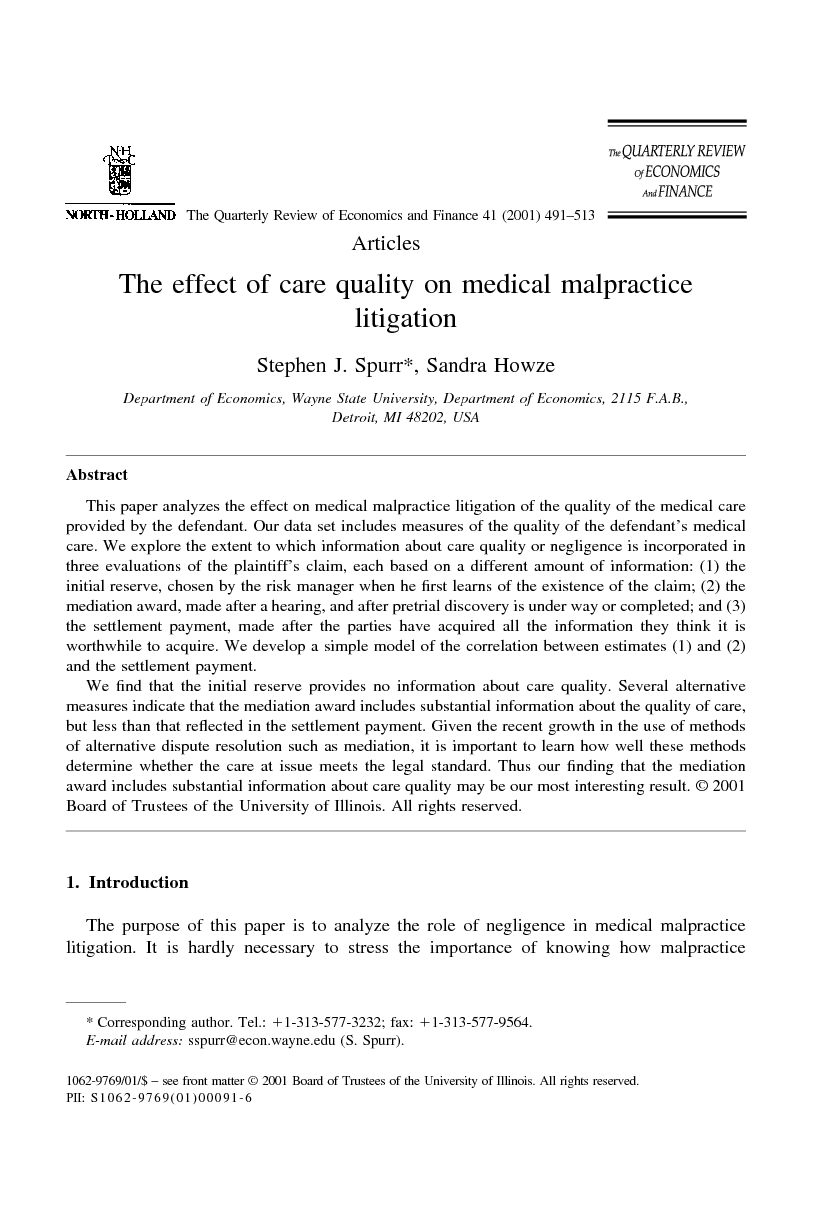 This paper analyzes the effect on medical malpractice litigation of the quality of the medical care provided by the defendant. Our data set includes measures of the quality of the defendant’s medical care. We explore the extent to which information about care quality or negligence is incorporated in three evaluations of the plaintiff’s claim, each based on a different amount of information: (1) the initial reserve, chosen by the risk manager when he first learns of the existence of the claim; (2) the mediation award, made after a hearing, and after pretrial discovery is under way or completed; and (3) the settlement payment, made after the parties have acquired all the information they think it is worthwhile to acquire. We develop a simple model of the correlation between estimates (1) and (2) and the settlement payment. We find that the initial reserve provides no information about care quality. Several alternative measures indicate that the mediation award includes substantial information about the quality of care, but less than that reflected in the settlement payment. Given the recent growth in the use of methods of alternative dispute resolution such as mediation, it is important to learn how well these methods determine whether the care at issue meets the legal standard. Thus our finding that the mediation award includes substantial information about care quality may be our most interesting result.

The purpose of this paper is to analyze the role of negligence in medical malpractice litigation. It is hardly necessary to stress the importance of knowing how malpractice litigation is affected by evidence on the quality of care. The primary justification for the current system is its deterrent effect on negligence. Clearly the incentive to provide care that meets professional standards is diluted to the extent that the link between negligence and liability is believed to be erratic. A view that courts frequently err in determining negligence has prompted proposals to adopt no-fault schemes, like a Virginia statute that provided automatic compensation for severe neurological birth injuries.1 The current concern about the cost of “defensive medicine,” that is, medical procedures and practices that are not cost-effective, but are done with a view toward possible future litigation, is based on the premise that health care professionals do not believe that the courts can identify negligence accurately. The first part of the paper explores the effect of care quality on the outcome of the case, that is, whether the case is settled or dropped. We investigate whether there is a tradeoff between damages and liability, that is whether a defendant will settle when potential damages are large even if the evidence of negligence is weak. We use several different specifications in order to exploit all the information in the data, namely, data on trial awards, and on the characteristics of claims that are dropped or settled, including the quality of care involved. The other issue considered in this paper concerns the trend toward increasing use of various methods of alternative dispute resolution (ADR). In recent years there has been a movement in the courts, legislatures, the legal profession and the academic community promoting the adoption and use of methods of ADR such as arbitration, mediation, abbreviated trial procedures, and even rent-a-judge programs. Advocates of ADR claim that ADR methods are less costly, and involve less delay, than traditional litigation; sometimes they also suggest that these methods do a better job of resolving claims in accordance with the law. In the area of medical malpractice, some methods of ADR, such as arbitration and pretrial screening panels, have been promoted with the claim that they would do better than the courts in weeding out frivolous cases. Clearly, before we decide the extent to which the court system should be replaced by ADR methods, we should learn how well these methods do the task of conventional litigation, that is, ascertaining whether the care in question met the legal standard and, if it did not, determining the damages that resulted from it.

Estimates from a Probit indicate that evidence relating to the defendant’s negligence is the only factor that determines whether the claim is dropped or settled. There is no evidence of a tradeoff between potential damages and the plaintiff’s ability to prove negligence, in the determination of the issue between drop and settlement. Given the recent movement in favor of alternative dispute resolution, and the premise that the paramount objective of the medical malpractice system is deterrence of negligence in medical care, it is important to learn the extent to which information about negligence is incorporated into the mediation award. We have tried to explore this issue in several ways. A direct test of the effect of the fault variable on settlement payments and mediation awards showed that this variable has a significant positive effect on mediation awards, but a somewhat stronger effect on settlement payments. In contrast, the initial reserve, set by the hospital’s risk manager shortly after the hospital learned of the claim, seems to contain no information about the quality of the defendant’s medical care. We also examined the correlation between our fault variable and the extent to which potential damages, given liability, are discounted in the mediation award. All our tests yield the same qualitative result, that the mediation award includes substantial information about the quality of the evidence of negligence. An interesting subject for future research would be a comparison of various methods of dispute resolution - arbitration, mediation, abbreviated trial procedures, conventional litigation, and even proposed approaches, with respect to their accuracy in determining damages and their ability to identify negligence. Boden 1990, Bovbjerg 1986, Cooter and Rubinfeld 1989, Danzon and Lillard 1983, Jensen et al 1999, Kessler and McClellan 1996, Mann 1990, Metzloff 1991, Miller 1973, Minnet 1987 and Shavell 1978Table A19