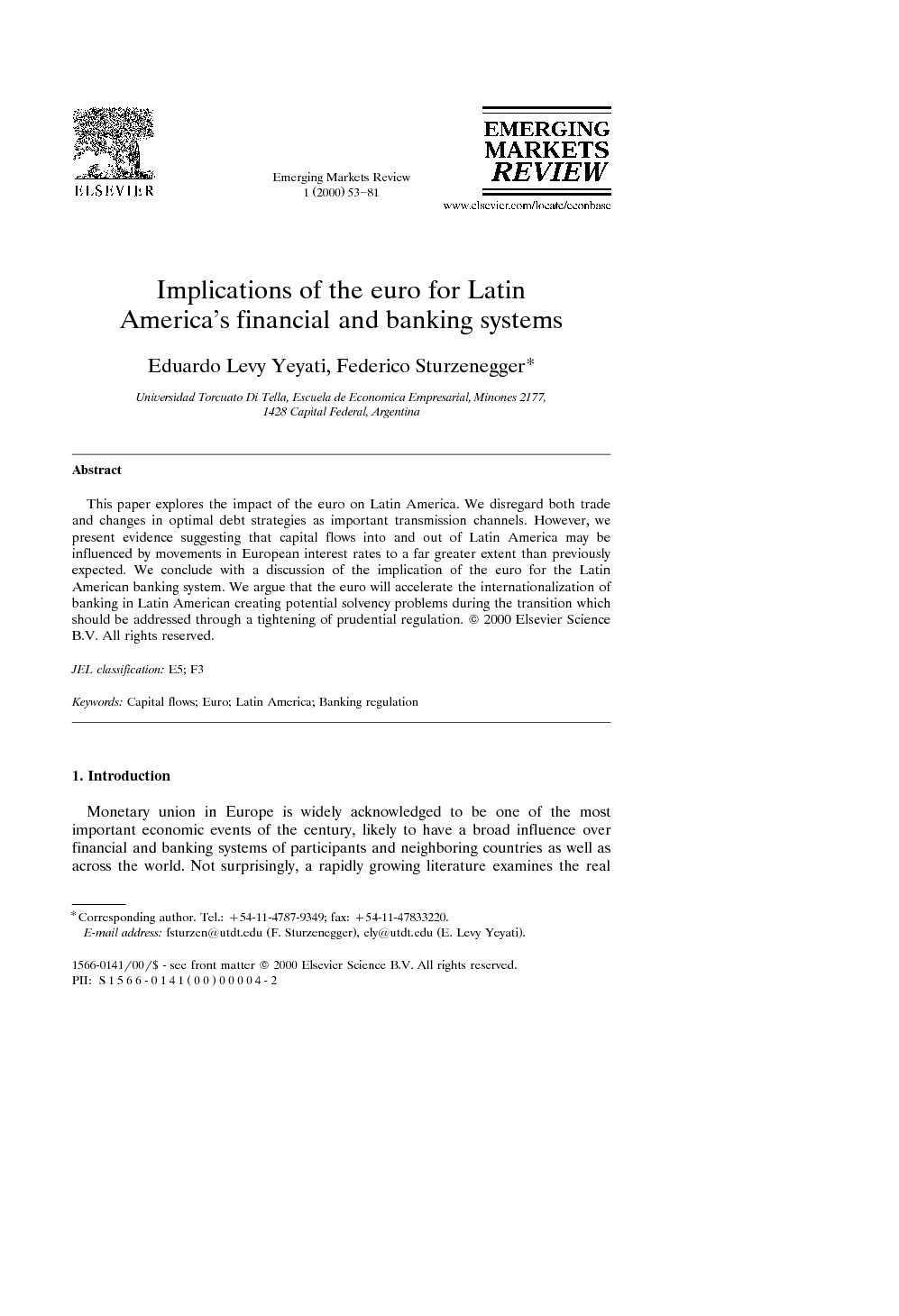 This paper explores the impact of the euro on Latin America. We disregard both trade and changes in optimal debt strategies as important transmission channels. However, we present evidence suggesting that capital flows into and out of Latin America may be influenced by movements in European interest rates to a far greater extent than previously expected. We conclude with a discussion of the implication of the euro for the Latin American banking system. We argue that the euro will accelerate the internationalization of banking in Latin American creating potential solvency problems during the transition which should be addressed through a tightening of prudential regulation.

Monetary union in Europe is widely acknowledged to be one of the most important economic events of the century, likely to have a broad influence over financial and banking systems of participants and neighboring countries as well as across the world. Not surprisingly, a rapidly growing literature examines the real and financial impact of a decline in intra-EMU transaction costs, the elimination of exchange rate risk across EMU members, and greater competition on European markets as a whole. Similarly, although to a lesser extent, the political and economic consequences of the launching of EMU for developed European outsiders, non-European industrial economies, and European transition economies with increasingly tighter links to countries in the euro zone, have already been the subject of a number of studies. However, to our knowledge, no systematic analysis has been conducted on the effect of EMU on regions with fewer apparent links with Euroland.1 This applies to Latin American countries and the reasons for this are manifold. On the one hand, real and financial links between Latin America and Europe are not so obvious as in the case of Eastern European economies, where intra-European trade accounts for more than half of the total, where exchange rate regimes, as well as financial intermediation in general, are typically tied to the Deutsche mark, and where in many cases stabilization experiments have depended in a significant way on the promise of a future EMU membership. Nor are Latin American countries comparable to neighboring Mediterranean countries with substantial commercial ties with Europe, or to CFA countries that belong to a monetary system based on the use of the French franc. Although LAC themselves display substantial heterogeneity that limits the analysis of the effects of EMU on the region as a whole, in general they present similarities in various fronts. Whereas they remain relatively closed in real terms, LAC are for the most part fairly open financially and, partly as a result, highly vulnerable to changes in the direction of international capital flows. Accordingly, the discussion of the influence of EMU should necessarily center on the financial channel, as opposed to the ‘trade’ channel. An analysis of the financial channel should discuss the impact on debt service flows arising from changes in the euro exchange rate level and volatility. On this front, the relevant questions point at optimal debt composition. However, it also has to contemplate the effect of more liquid European financial markets that will derive in lower financial transaction costs and risks, as well as in a lesser scope for diversification. Will the former dominate the net effect, with Euroland becoming an attractor of international flows at the expense of other markets, or will investors favor reasonably developed emerging markets as a source of risk diversification? Finally, in the context of globalized financial markets and open Latin American economies, increased financial competition in the Euro zone is likely to accelerate the trend towards banking consolidation and concentration, the impact of which is already being reflected by the ongoing process of internationalization of financial intermediation in Latin America. Thus, the launch of EMU brings to the forefront a number of important questions. What should be the position of local authorities regarding foreign participation in the banking sector? Is full internationalization of the banking industry à la New Zealand a blueprint for small economies in a world of large financial institutions? If so, how should the transition be handled to avoid financial distress? The roadmap of the paper follows closely the above discussion. After a brief assessment of the relative importance of the trade link, we proceed to examine more in detail the financial channels through which EMU may have an effect on LAC. Finally, we explore the possible spin-offs of banking competition in Europe, focusing on the benefits and pitfalls of foreign penetration in Latin America. The final section summarizes and provides tentative answers to the questions that motivate the paper.

In discussing the impact of the euro on Latin America we started by illustrating why the emphasis should be placed on the financial impact of EMU rather than on its real, trade-related, aspects. We argued that this conclusion is driven by the closedness of Latin American economies, rather than by the relative importance of real ties with European countries which, for many countries, appear to be of around the same order as those with the US Likewise, we showed that the optimal currency composition of external debt from a hedging perspective is unlikely to be affected by the euro, due to the apparently low margin to diversify export earnings volatility by means of long-term debt instruments, in particular with those denominated in euros. Where the impact of the launch of EMU is likely to be felt more strongly is in the behavior of capital flows to the region. The increasing convergence of European returns, both in interest rates and stock markets, by limiting the scope for diversification within Europe, may induce a persistent shift of European and international investors that seek further diversification opportunities towards emerging markets that present a reasonable level of development, a shift that may be already behind the surge in European banking flows. In this regard, Latin American markets present the advantage of being less closely correlated (and, we may add, relatively more developed) than those of neighboring transition economies. This process is already under way. Our analysis of capital flows between Europe and Latin America, and in particular of the sensitivity of these flows to variations in European rates, indicated that the region is likely to be highly vulnerable to changes in EMU’s monetary stance. We showed that funds from the region have become an increasingly important component of total capital inflows to Latin America which, combined with the fact that from now on they will be governed by a single interest rate, implies that the impact of sharp fluctuations in EMU’s monetary policy on the financing costs faced by Latin American economies is bound to be sizable. Finally, we argued that increased banking competition in EMU may accelerate the ongoing process of internationalization of banking sectors in Latin America. Indeed, the success of EMU makes all the more apparent the irreversible trend towards the global consolidation of financial services, as witnessed the current process of mergers and acquisitions in the main financial centers. Therefore, rather than asking whether internationalization will ultimately come, we chose to concentrate directly in the benefits and pitfalls of such a process. Our discussion suggested that foreign penetration can be considered as the natural outcome of the opening of formerly protected sectors to more efficient institutions that benefit from the comparative advantage offered by financial centers, as well as the response of increasingly vulnerable domestic banking systems that cannot compete equally with better capitalized and more widely diversified institutions backed by more reliable lender-of-last-resort facilities in parent countries. In addition, economies of scale in supervision technologies motivate the willingness of monetary authorities in many small open economies to import supervision services by transferring the responsibility to the parent countries. Finally, risk pooling considerations make it relatively less costly for central banks in these economies to provide emergency assistance to internationally diversified financial institutions. However, the cost of this strategy should not be underestimated. First, it is not obvious the extent to which the parent institution (or, for that matter, monetary authorities in the parent country) would be willing to incur the costs of effectively insuring their foreign operations. There is certainly a limit beyond which the financial costs of bailing out foreign affiliates exceed the reputation cost of letting them fail. More important, however, are the short-run costs of financial opening in a context of weak domestic banks and inefficient supervision. As in any other industry, foreign competition, by negatively affecting overall bank profitability, may amplify existing fragilities. In addition, bank competition may create incentives to engage in excessive risk taking as a way of ‘gambling for resurrection’. Therefore, inasmuch as the opening of banking sectors in the region appears to be an unavoidable consequence of the removal of capital account restrictions, it is crucial that it be accompanied by the necessary prudential safeguards, possibly including an active intervention of the supervisory authority to prevent disruptive competition during the transition.