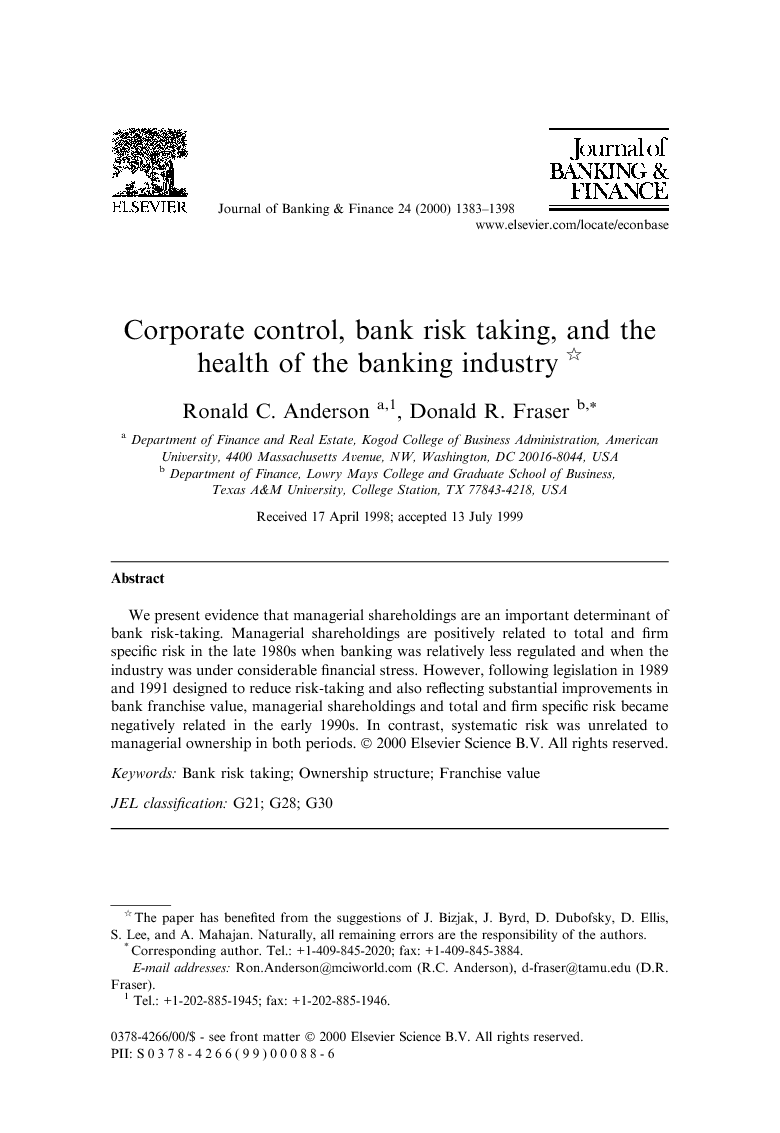 The finance literature abounds with attempts to quantify and explain risk taking behavior at commercial banks. Following Merton (1977) much of this research focuses on the incentives created by the fixed-rate deposit insurance system for banks to increase the amount of risk in their asset and liability portfolio (an incentive system referred to as the moral hazard problem). More recently, Keeley (1990, p. 1183) finds evidence to support the hypothesis that “increases in competition caused bank charter values to decline, which in turn caused banks to increase default risk through increases in asset risk and reductions in capital.” While there are other explanations of risk-taking focusing on bank (or shareholder) behavior, there is little explicit consideration of the role of bank management in these decisions. Yet it is management rather than shareholders who make the portfolio decisions that determine the risk structure of a bank. Identifying the link between managerial risk preferences and share ownership is a complex task. Conceptually, it might be expected that managers with small ownership stakes in their banks would behave in a risk averse rather than value maximizing way, as they seek to protect the value of their firm-specific human capital. As their shareholdings increase, however, they have more incentives to engage in risk taking, especially under a fixed rate deposit insurance system that existed prior to 1993 and in a period such as the late 1980s when charter or franchise values were diminished. At some substantial levels of shareholdings, however, managers may become entrenched and no longer make value maximizing decisions. To the extent that managerial entrenchment becomes important, the risk/share ownership relationship may thus become curvilinear. We provide evidence on the managerial shareholdings-risk relationship from bank stock price data drawn from two distinct time periods with quite distinct regulatory regimes and bank charter values. We conjecture that a positive relationship should exist in the 1987–1989 period as the fixed rate deposits system, lax regulation, and low charter-values encouraged managers to take on additional risk. In contrast, in the latter period, 1992–1994, management risk taking was constrained by additional regulations, including risk-adjusted deposit insurance premiums and also by substantially increased bank charter values. Our evidence is generally consistent with these arguments. We find that: 1. Total and firm specific risk are positively and significantly related to managerial holdings between 1987 and 1989. 2. Total and firm specific risk are negatively and significantly related to managerial holdings between 1992 and 1994. 3. Systematic risk is unrelated to ownership in both periods. Existing evidence on the relationship between managerial shareholdings and risk is inconclusive, perhaps reflecting differences in risk measures, different time periods in the analysis, and different approaches to analyzing the relationships. Saunders et al. (1990), using capital market measures of risk, provide support for the hypothesis that banks in which managers hold a large fraction of the stock exhibit significantly higher risk-taking behavior over the 1978–1988 period, and that the incremental risk was more prevalent following deregulation. Demsetz et al. (1997) also find a positive (and nonlinear) relationship between market risk measures and managerial shareholdings over the 1991–1995 period, though only at low franchise value banks. In contrast, Chen et al. (1998) find a negative and nonlinear relationship between managerial ownership and bank risk over the 1988–1993 period. Gorton and Rosen (1995) focus on the risk/managerial shareholdings relationship as it is affected by both entrenchment and by shifts in the economic conditions of the banking industry. They argue that “bad” managers take excessive risk in periods when the industry is unhealthy (as reflected in low franchise values). Their model predicts a nonlinear relationship between managerial shareholdings and risk, with risk initially increasing with shareholdings and then declining as entrenchment becomes a significant motivating factor. Their results, drawn from the 1980s period of low franchise values, are generally consistent with their model. While their model implies that risk will decline in the 1990s as bank franchise values increase, the time period encompassed by their study did not permit analysis of this issue. Our sample period and model does, however, allow us to address this important issue. Section 1 describes the sample and the variables used in the analysis, while Section 2 presents the empirical model. Section 3 discusses the results and Section 4 concludes the paper.

Our results suggest that managerial shareholdings do influence bank total and firm specific risk. However, the association is different in the 1987–1989 period when banks were less regulated and under financial stress than in the 1992–1994 period following legislation (FIRREA and FIDICIA) designed to restrict risk-taking and after the industry returned to profitability. Managers with substantial equity holdings took more risk in the 1987–1989 period. In contrast, managers with substantial equity position took less risk in the 1992–1994 period in response to regulatory changes designed to reduce incentives for risk-taking and improvements in the financial health of the banking industry. Evidence from the other variables also provides potentially important insights into bank risk-taking. Franchise value appears to be an important determinant of bank risk-taking: banks with high franchise values are less likely to take risk than banks with low franchise value. In contrast, outside blockholders have, at best, limited influences on bank risk taking. While it does appear that managerial shareholdings do influence bank risk taking and that this relationship is different in the 1992–1994 period then in the 1987–1989 period, identifying the causes of the change must be done in a more tentative way. Large increases in franchise values in the 1990s suggest reduced incentives for banks to take risk, as do significant changes in the bank regulatory regime designed to reduce bank risk taking. Further evidence on whether the enhanced regulatory restrictions have been sufficient to control management incentives to take risk will be provided the next time that bank franchise values decline substantially.