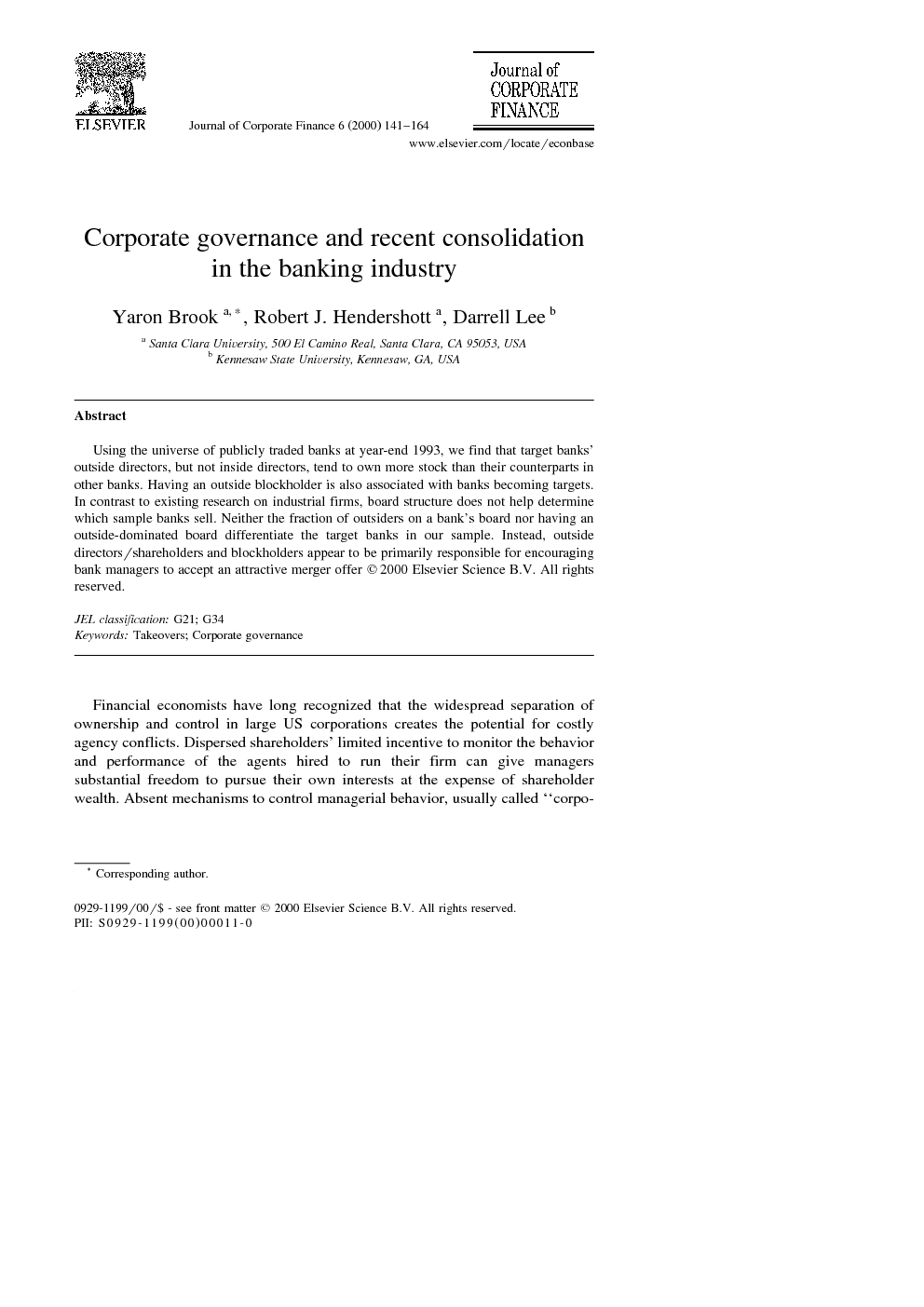 Using the universe of publicly traded banks at year-end 1993, we find that target banks' outside directors, but not inside directors, tend to own more stock than their counterparts in other banks. Having an outside blockholder is also associated with banks becoming targets. In contrast to existing research on industrial firms, board structure does not help determine which sample banks sell. Neither the fraction of outsiders on a bank's board nor having an outside-dominated board differentiate the target banks in our sample. Instead, outside directors/shareholders and blockholders appear to be primarily responsible for encouraging bank managers to accept an attractive merger offer

The banking industry's recent consolidation provides an excellent opportunity to evaluate which governance structures tilt corporate decision-making toward shareholder wealth maximization. Technological advances and deregulation have shifted the optimal number of banks downward, creating pressure to merge. Bank shareholders receive a substantial premium if their bank is acquired. Conversely, announcement returns suggest that a typical bank merger hurts the acquiring banks' shareholders. Bank managers, however, have an incentive to make their bank one of the surviving institutions. Because shareholder and manager interests diverge, which banks end up becoming targets provides valuable evidence about corporate governance efficacy. Using the universe of available publicly traded banks at year-end 1993, we find that almost one-fifth are acquired in the next 3 years (defined as the merger being announced and completed between 1/1/94 and 12/31/96). Target shareholders receive a substantial premium in these takeovers: targets rise an average of over 18% at the merger announcement (net of market). Bidders, however, drop an average of more than 2% at the merger announcement. Using a variety of empirical methods, we document a strong and consistent link between outside director equity ownership and banks becoming takeover targets. Because agreeing to a merger systematically benefits target shareholders, outside director ownership appears to focus decision-making on shareholder wealth maximization. We also find a greater frequency of outside blockholders in the banks that become targets, suggesting that large non-director shareholders can also encourage banks to act in shareholders' best interests. Our results provide an interesting contrast to the existing literature. Although outside ownership is associated with banks being acquired, neither insider ownership nor outside-dominated boards are consistently associated with banks becoming targets. Although past research has had limited success predicting successful takeovers using ownership variables, the bulk of the evidence suggests that substantial insider ownership impedes takeovers. In our sample, inside ownership inhibits takeovers only when insider director ownership exceeds outside director ownership. Past research using industrial firms tends to find that having an outside-dominated board improves corporate decision-making, but little evidence that greater outside director ownership is associated with shareholder wealth maximization. We find the reverse in our sample of bank mergers. At the same time, we are able to replicate Cotter's et al. (1997) result that firms with outside-dominated boards tend to respond more positively to takeover announcements. This divergence of results suggests that outside ownership and presence of outside directors may play discrete roles — outside ownership helps put the firm “in play” while outside directors make sure shareholders receive the largest premium possible once merger negotiations begin. Future studies will need to explore these potentially different roles more carefully.