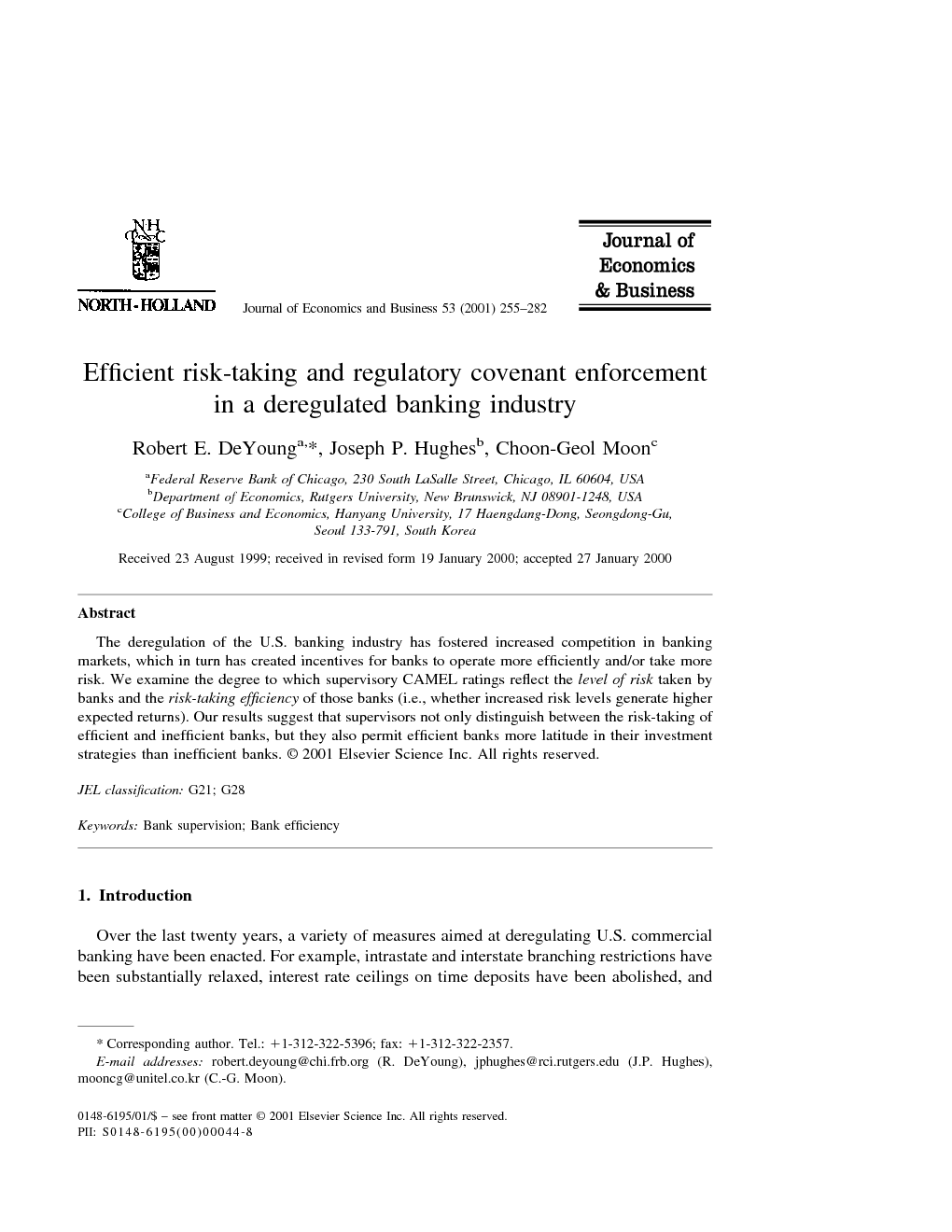 The deregulation of the U.S. banking industry has fostered increased competition in banking markets, which in turn has created incentives for banks to operate more efficiently and/or take more risk. We examine the degree to which supervisory CAMEL ratings reflect the level of risk taken by banks and the risk-taking efficiency of those banks (i.e., whether increased risk levels generate higher expected returns). Our results suggest that supervisors not only distinguish between the risk-taking of efficient and inefficient banks, but they also permit efficient banks more latitude in their investment strategies than inefficient banks.

In an era of deregulation that seeks to increase banks’ competition and to improve their efficiency, regulation has been linked to the risks that banks take, to address the increased incentives to take risk that are created by reduced charter values and mispriced safety nets. In addition, banks whose risk-taking leads to episodes of financial distress experience costly regulatory strictures that generally reduce the risk-taking incentives for all banks. Using CAMEL ratings that indicate the likelihood that such strictures will be imposed, we have asked if commercial bank regulators distinguish between a bank’s level of risk and its efficiency at risk- taking in their ratings of banks. Do bank regulators treat the risk-taking of efficient banks differently than the risk-taking of inefficient banks? Do regulators afford efficient banks more latitude in their investment strategies than inefficient banks? Do regulators create incentives for banks to improve the efficiency of their risk-taking? We have offered evidence that answers, “Yes,” to each of these questions. The evidence seems to indicate that examiners draw a line between efficient banks and inefficient banks. Efficient banks are better at risk-taking, and when they take extra risk to increase their expected return, our results suggest that examiners do not penalize them with worse CAMEL ratings. Apparently, their “best-practice” ability to manage risk enables them to take extra risk without compromising their safety and soundness. Hence, the evidence implies that bank regulators impose lower distress costs on these banks and that the structure of these costs encourages efficiency but does not discourage efficient risk-taking. For banks with less ability to manage risks or to enhance return, however, CAMEL ratings do reflect the risk-return trade-off. Examiners penalize these banks for taking increased risk. In addition, our results suggest that supervisors hold large inefficient banks (i.e., banks whose safety and soundness is most likely to have implications for the stability of the banking system) to higher standards than large efficient banks. Thus, the higher schedule of distress costs imposed on inefficient banks gives them the incentive to become more efficient and to take less risk, and the larger the inefficient bank, the greater these incentives. Thus, our evidence suggests that opportunities for risk-taking created in a more competitive, deregulated banking industry are not encouraged equally for all banks and that this differential treatment of banks encourages all banks to manage risk more efficiently.