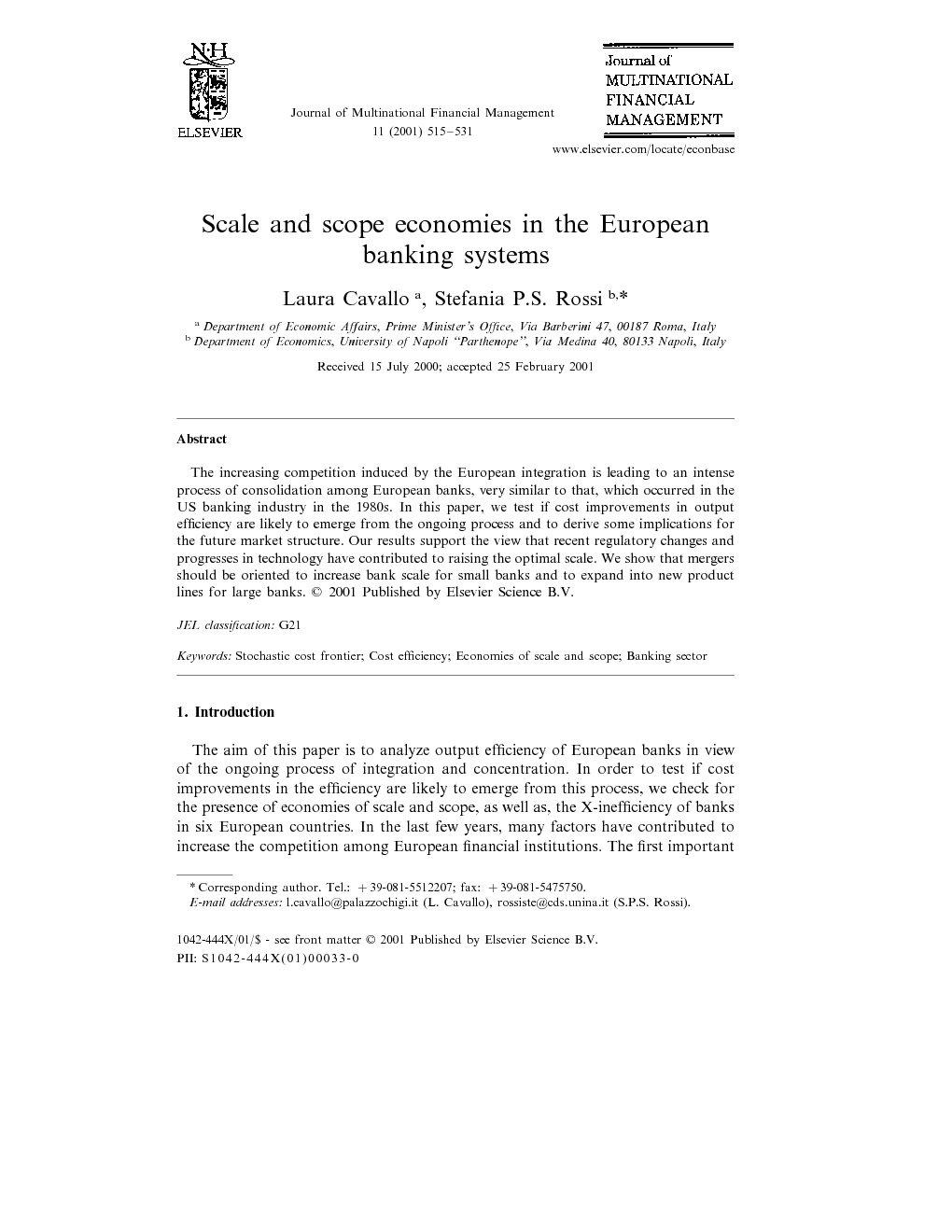 The increasing competition induced by the European integration is leading to an intense process of consolidation among European banks, very similar to that, which occurred in the US banking industry in the 1980s. In this paper, we test if cost improvements in output efficiency are likely to emerge from the ongoing process and to derive some implications for the future market structure. Our results support the view that recent regulatory changes and progresses in technology have contributed to raising the optimal scale. We show that mergers should be oriented to increase bank scale for small banks and to expand into new product lines for large banks.

In this paper, we analyze the output and X-inefficiency for a sample of European banks over the period 1992–1997 using a stochastic cost frontier model. While most of the empirical literature conclude that scale economies are exhausted at relatively low levels of output, our analysis found that despite small banks present the higher economies of scale in all countries, economies of scale exist at any production scale, and for almost every bank organizational type. This evidence may be due to the different data sets and sample period used in the empirical estimations, and to differences in the model specification. Our results support the view that recent regulatory changes and progresses in technology have contributed to raise the optimal scale. Moreover, the significant scope economies found across all output ranges confirm the prediction that the move towards universal banking promoted by the Second European Banking Directive increased the degree of scope economies. Economies of scope, more pronounced for large banks, may be related to the cost complementarities of investments with higher informational inputs. Increasing size and extended joint production of banking products can be justified by cost consideration. Results suggest that, in order to improve efficiency, large banks should concentrate on output mix diversification, while small banks should expand the scale of production. An interesting topic for further research concerns the cost effect of more diversification through mergers between banking and non-banking institutions (e.g. bank-assurance). Since internal growth is limited, cross-border takeovers are increasing to create bigger and more diversified institutions. Overall, our findings support the intensification of the ongoing process of merger and acquisitions. However, our results suggest that, if on the one side further gains in efficiency can emerge from the ongoing consolidation process, on the other national and EU policy makers should be concerned about an excessive level of concentration. The sector presents some monopoly characteristics that are likely to increase because of the effect of technological progress on the optimal scale. This implies the need for concern about the effectiveness of existing competition policies.