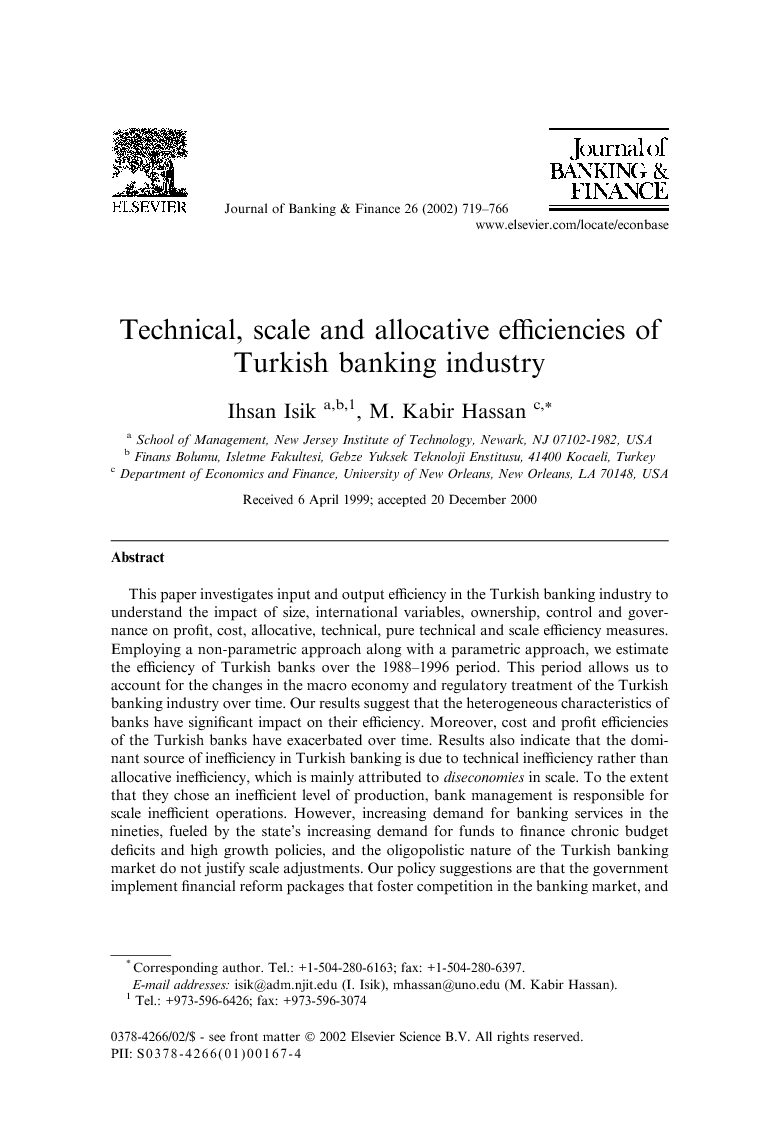 This paper investigates input and output efficiency in the Turkish banking industry to understand the impact of size, international variables, ownership, control and governance on profit, cost, allocative, technical, pure technical and scale efficiency measures. Employing a non-parametric approach along with a parametric approach, we estimate the efficiency of Turkish banks over the 1988–1996 period. This period allows us to account for the changes in the macro economy and regulatory treatment of the Turkish banking industry over time. Our results suggest that the heterogeneous characteristics of banks have significant impact on their efficiency. Moreover, cost and profit efficiencies of the Turkish banks have exacerbated over time. Results also indicate that the dominant source of inefficiency in Turkish banking is due to technical inefficiency rather than allocative inefficiency, which is mainly attributed to diseconomies in scale. To the extent that they chose an inefficient level of production, bank management is responsible for scale inefficient operations. However, increasing demand for banking services in the nineties, fueled by the state's increasing demand for funds to finance chronic budget deficits and high growth policies, and the oligopolistic nature of the Turkish banking market do not justify scale adjustments. Our policy suggestions are that the government implement financial reform packages that foster competition in the banking market, and that the industry devise incentive schemes to improve managerial efficiency.

Employing both parametric and non-parametric methods, we estimate the cost and profit efficiencies of Turkish banks over the 1988–1996 period to study the impact of different ownership and organizational structures on efficiency of Turkish banking sector. Over the years under study, we find that the overall cost and profit efficiencies for the Turkish banks are 72% and 83%, respectively, implying that on average, about 40% of the bank resources and about 20% of the potential bank profits are wasted during the production of banking services. The results also indicate that the production efficiencies of the industry consistently fell over time, which seems to have resulted from increases in the cost of funding and growth of the banks in the recent years. The mean efficiency measures that we find for the industry in general, and for the private banks in particular, are higher than those reported in earlier studies on Turkish bank efficiency. We attribute this finding mainly to the inclusion of the omitted factors in other studies such as off-balance sheet activities, repo transactions, inter-bank funds, and lending to special sectors. We also decompose the overall cost efficiency into its allocative and technical efficiency components. The results suggest that the dominant source of the cost inefficiency in the Turkish commercial banking sector is due to technical inefficiency rather than allocative inefficiency. While regulation is typically given as a major source of allocative inefficiency, poor management is usually associated with technical inefficiency. Relatively higher technical efficiency implies that the competitive viability of the Turkish commercial banks depends, to a great extent, upon improved managerial efficiency. However, further analysis suggests that most of the observed technical inefficiencies are due to operating at incorrect scales rather than operating off the efficient frontier. To the extent that it involves the choice of an inefficient level, scale inefficiency can be considered a form of managerial inefficiency. The period of our study corresponds to the period of revival of growth in commercial banking that seems to have encouraged the over-branching and over-staffing problems of the pre-1980s. Accordingly, the results show that the Turkish banks have increasingly experienced diseconomies of scale and most of the scale inefficient banks suffer from “transgressing” the optimum size. Consequently, the banks in our sample tend to incur nontrivial production costs due to scale inefficiency, which seem to be associated more with being at a size greater than the optimum. Although efficiency gains could be realized by reducing production levels, the excess demand for banking services, induced by the state's high growth polices in recent years, does not justify it. The oligopolistic structure of the Turkish banking industry and the increased demand for banking services have sustained managerial inefficiency, despite the reform agenda undertaken in the 1980s to achieve greater competition in the Turkish economy. A second-stage correlate of efficiency analysis suggests that the relationship between bank size and efficiency is strongly negative. While small banks compete with large banks primarily in metropolitan markets, they do not compete in rural markets. Thus, strong competition might have induced more market discipline on small banks, leading to greater cost efficiency. Unlike their counterparts in the US, foreign banks operating in Turkey seem to be significantly more efficient than their domestic peers. The local market conditions in Turkey provide some opportunities for foreign banks to utilize their comparative advantages in addition to their relatively minor scale problems, which appears to be a major problem for the domestic banks. In general, private banks are found to be more efficient than public banks in terms of all types of efficiency. We also find a strong association between X-efficiency and management-team structure. Our results indicate that banks where the board is independent of management are significantly more efficient than those banks with the same management and board. In addition, publicly traded banks, which are exposed to more market discipline, are found to be more technically efficient than privately held banks. Banks operating under a holding company structure outperform the independent banks in terms of efficiency. Although multinational domestic banks seem to be more efficient than pure domestic banks, their efficiency differential does not appear to be significant.