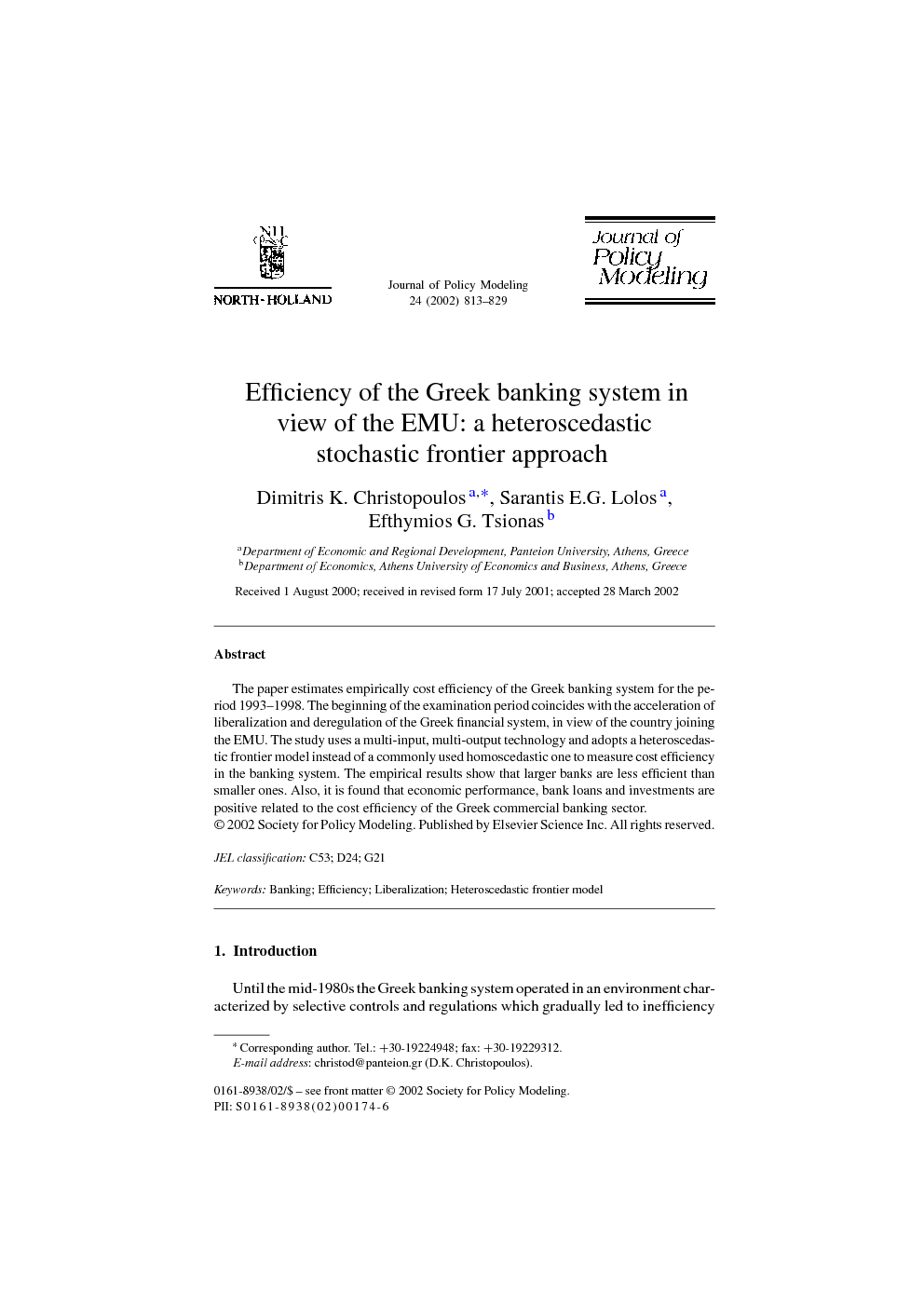 The paper estimates empirically cost efficiency of the Greek banking system for the period 1993–1998. The beginning of the examination period coincides with the acceleration of liberalization and deregulation of the Greek financial system, in view of the country joining the EMU. The study uses a multi-input, multi-output technology and adopts a heteroscedastic frontier model instead of a commonly used homoscedastic one to measure cost efficiency in the banking system. The empirical results show that larger banks are less efficient than smaller ones. Also, it is found that economic performance, bank loans and investments are positive related to the cost efficiency of the Greek commercial banking sector.

Until the mid-1980s the Greek banking system operated in an environment characterized by selective controls and regulations which gradually led to inefficiency and to serious distortions in the functioning of the country’s financial system. The need for a modern, flexible and market-oriented financial system and the prospects for participating in the Single European Market and the EMU initiated efforts towards the deregulation of the financial system. In recent years banking activity in Greece was decisively affected by the harmonization of national regulations within the European Union and especially with the enactment of the Second Banking Directive (1992). In addition, consistent macroeconomic policies have been adopted in view of the country’s prospects of joining the EMU, which gradually reduced inflation and the interest rates.1 Currently, the Greek banking system is faced with increased competition and internationalization, while banking disintermediation has been in evidence. These factors, together with the fast development of information technology, trigger major structural changes in the Greek banking system, which is making efforts at increasing efficiency, reducing costs of bank services and diversifying in other business areas. More changes are expected in the years to come. In recent years, only one empirical work has focused attention on inefficiencies of Greek banking system. In particular Noulas (1997) used a data envelope analysis (DEA) methodology to evaluate the relative performance of state against private banks for 1992 to conclude that (i) technical efficiency decreased for both private and state banks, and (ii) state banks experienced technical progress while private banks did not. However, his study limited the analysis to the pre-1993 period when the liberalization of the financial system was actually initiated. The purpose of this paper is to extend earlier work on cost efficiency of the banking system to a medium-sized country like Greece and study whether it has been affected by the initiated liberalization process and deregulation measures that have been taken. Up to the present the Greek banking system has not been studied adequately due to data deficiencies and its features have not been thoroughly analyzed.2 We believe that the assessment and quantification of cost efficiency of the Greek banking system over the liberalization period is necessary for the evaluation of its performance and future prospects within the EMU framework. The conclusions drawn could prove useful for the analysis of the cost structure of the banking sectors in other medium-sized economies that are undergoing structural changes. The empirical evidence on Greece is arrived at using multi-input, multi-output flexible cost function to represent the cost structure of the banking system. Technical efficiency is estimated using stochastic frontier models. However, when estimating stochastic frontiers in the banking sector it is quite probable that heteroscedasticity is present in the data since banks of different “size” are pooled together. In this case, a heteroscedastic cost frontier approach should be used. Caudill and Ford (1993) and Caudill, Ford, and Gropper (1995) reported that heteroscedasticity in the one-sided error affects materially parameter estimates in a single factor frontier production function. Specifically, when the model is estimated by maximum likelihood, heteroscedasticity leads to an overestimation of the intercept and to an underestimation of the slope coefficients. Thus, they conclude that inefficiency measures are affected by heteroscedasticity. In view of this, a heteroscedastic stochastic frontier approach is adopted here to evaluate technical efficiency performance of the Greek banking sector in the deregulation period. The remaining of the paper is organized as follows. Recent developments in the Greek banking system are contained in Section 2. The econometric model is presented in Section 3. In Section 4 the empirical evidence is discussed and the technical efficiency index is related to various economic variables. The final section summarizes the results and discusses implications for the banking activity in Greece.

In this study we have examined cost efficiency for the Greek banking system over the period 1993–1998, a period characterized by an acceleration of liberalization and deregulation of the financial system. We used a multi-input, multi-output flexible cost function to represent the technology of the sector, and a heteroscedastic frontier approach to measure technical efficiency. The results suggest not only the presence of heteroscedastic inefficiency in the banking sector, but also that ignoring heteroscedasticity leads to misguided conclusions about the efficiency of large versus small banks. Our empirical results showed that the small and medium-sized banks are almost fully efficient, while in large banks efficiency measures range from 60 to 95%. Furthermore, for larger banks it appears that efficiency is inversely proportional with the bank size in terms of assets. Thus, if large banks used their inputs as efficiently as possible, they could reduce their production cost by roughly 5–45%. It appears that over the period under review the large Greek banks enjoy fairly low cost efficiency. This fact could be attributed to traditional characteristics of the Greek banking system, more pronounced in larger and mostly state-controlled banks, such as inefficient management, inadequate staff motivation and strict labor relations. Furthermore, our empirical results showed that bank efficiency measures are related to various bank-specific economic factors. In particular, the improvement of bank performance is strongly related to the achievement of high efficiency scores, while increased shares of investments and especially loans to total bank output were found to be quite important for the improvement of cost efficiency. Thus, efforts would be mainly directed to better economic performance. It seems that the role of these efforts is crucial for further improvements in bank efficiency and, to a large extent to creation of a competitive banking system. On the contrary, bank size is found to be inversely related to the efficiency index. Over the second half of the 1990s, Greek banks started to reconsider their strategies and extensive restructuring in terms of mergers and acquisitions took place, in view of Greece entering the Euro-zone in 2001. The observed mergers and acquisitions, mostly between smaller banks over the reviewed period, may be attributed to two main factors. The first is related to a wave of privatization initiated by direct government action, in line with EU developments. The second factor directing acquisitions has been market discipline, that is to obtain cost and efficiency gains. The latter is justified by the empirical findings of Christopoulos, Lolos, and Tsionas (2000), since the great majority of banks involved in mergers and acquisitions exhibited increasing returns to scale.9 Since larger banks are less efficient it would appear puzzling to find them engaged in mergers and acquisitions as buyers. However, Resti (1998), who analyzed 67 bank mergers in Italy obtained the same result. To explain this result, it should be noted that differences in efficiency as wellas economies of scale and scope constitute the most important premerger cost incentives for acquiring another bank. If the acquiring bank is more cost efficient than the acquired bank, there is an incentive for merger, since transferring management skills to the acquired bank can create additional profit. The EMU entry is affecting the Greek banking market in several respects. Increased cross-country competition and the intensification of competition in the domestic market has put pressures on bank profitability and led to a reduction in interest rate margins, although they still remain high in relation to the EU average. Also, the gradual reduction of interest rates along with specific government actions are leading to increased lending to the private sector and the offering of new differentiated products. These actions, including the reduction of the required bank deposits at the Central bank, in line with the EU harmonization of the minimum reserve requirements ratios, and the abolition of the banks’ obligation to keep a high proportion of their portfolio in government securities for the financing of public deficits, led to increased liquidity of banks. In addition, market liberalization enabled banks for a greater utilization of the Interbank market. Thus, restructuring of the asset and liability sides of banks’ balance sheet is taking place and converges to the pattern characterizing the EU markets. Finally, bank disintermediation also occurs, although bank financing is still the most dominant source of enterprises’ funding. In the years to come it is expected a new round of mergers, acquisitions, conglomeration and strategic alliances in the Greek banking market. Greek banks will be aiming at repositioning in the EMU markets and achieving the necessary large-scale operations in order to share the high information technology costs and to reap economies of scale.10 They will also try to exploit market segments within the EU or in regional markets (e.g., in the Balkans), but they will be constrained to achieve a more efficient use of resources owing to their small size.