عنوان انگلیسی
To what extent will the banking industry be globalized? A study of bank nationality and reach in 20 European nations
دانلود فوری مقاله + سفارش ترجمه 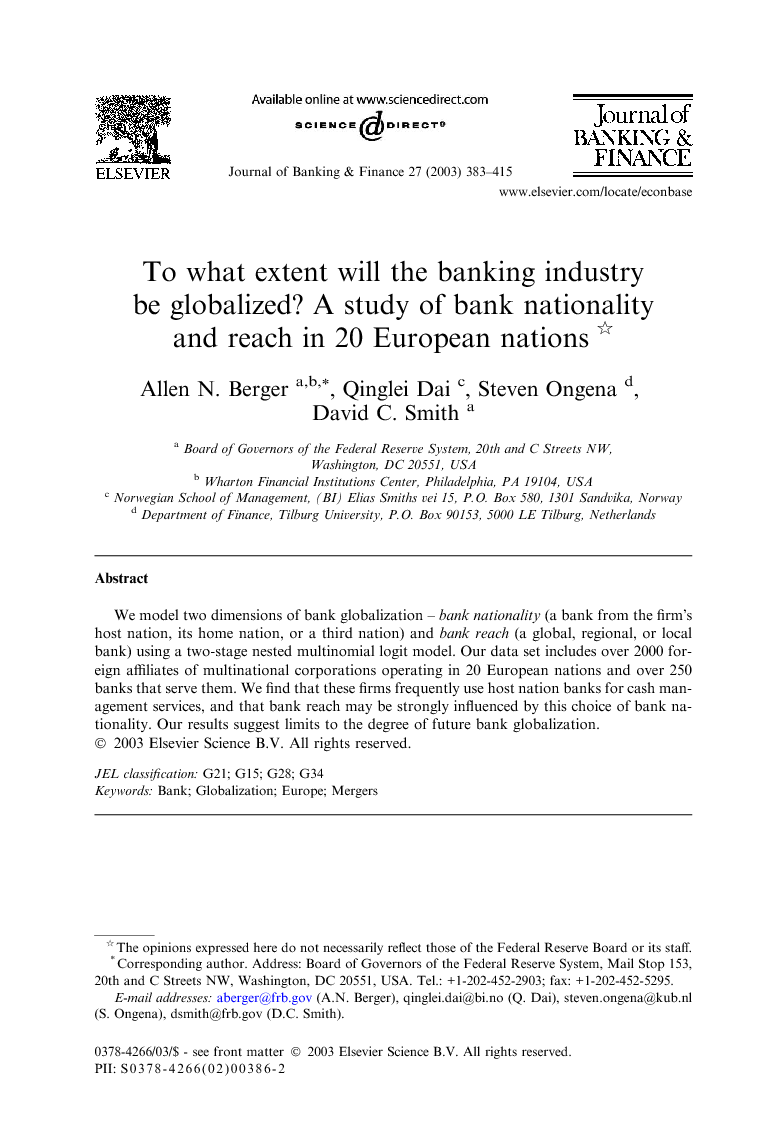 We model two dimensions of bank globalization – bank nationality (a bank from the firm’s host nation, its home nation, or a third nation) and bank reach (a global, regional, or local bank) using a two-stage nested multinomial logit model. Our data set includes over 2000 foreign affiliates of multinational corporations operating in 20 European nations and over 250 banks that serve them. We find that these firms frequently use host nation banks for cash management services, and that bank reach may be strongly influenced by this choice of bank nationality. Our results suggest limits to the degree of future bank globalization.

In this paper, we examine bank globalization along two dimensions – bank nationality and bank reach – using data on cash management services provided to foreign affiliates of large multinational corporations. These firms represent a significant portion of the potential market for global banks and should therefore be influential in determining the extent to which the banking industry will become globalized. The provision of cash management services to such firms represents a crucial “middle ground” of financial services that could be provided by a range of different institutions – from a small local bank that operates only in the host nation to a large global bank headquartered in a distant financial center but with a physical presence in the host nation. We investigate bank nationality and reach using a two-stage NMNL model in which bank nationality is of primary importance and may influence bank reach. Explanatory variables in the model include (1) host nation characteristics, (2) geographic, cultural, and financial differences between the home and host nations, and (3) attributes of the multinational corporations. The first two sets of variables are designed to reflect both the demand of the foreign affiliates of the multinational corporations for cash management services from banks of different nationalities and the willingness and ability of these banks to supply the services. The attributes of the corporations are assumed to affect both bank nationality and reach through the demand side alone. We find that nearly two-thirds of our sample firms choose a bank headquartered in the host nation and less than 20% select a bank from their home nation. This is consistent with a strong “concierge” effect that dominates the “home cookin” effect. That is, affiliates of multinational corporations often use banks that know the local market, culture, language, and regulatory conditions rather than banks that are more familiar with the conditions in the corporation’s home market, or have direct ties to the corporation in the home nation. The data also suggest that bank reach is strongly associated with bank nationality. Firms that use host nation banks for cash management services are less likely to use a global bank and more likely to use a local or regional bank. Moreover, corporations that use host nation banks also tend to use regional banks as they expand internationally, whereas those that use home nation banks tend to rely on global banks as they expand. These findings together suggest that local and regional banks may be better at delivering concierge services than global banks, and large, multinational corporations need more concierge services as they expand further from their home nation. Overall, the finding that multinational corporations rely on host nation banks with limited reach suggests the extent of globalization may remain limited. Our bank nationality and bank reach regressions also yield some additional interesting results about the likely determinants of bank globalization. For example, we find that the very low levels of financial development in the former socialist nations appear to have strong effects on both bank nationality and bank reach. Firms operating in the former socialist nations of Eastern Europe are more likely to use home nation or third nation banks rather than host nation banks, and are also more likely to choose banks with a global reach. We caution that these inferences are subject to several caveats. First, we acknowledge that the financial structure of the banking industry reflects some supply and demand factors that are not modeled here. For instance, implicit barriers to competition might limit the supply of cash management services in some nations and therefore reduce the choice set available to our sample firms. Second, because our sample is a “snapshot” of the European market in 1996, our data do not necessarily reflect the long-run, steady-state equilibrium. For instance, the introduction of the Euro in 1999 – and its subsequent adoption as a physical currency in 2002 – may have reduced the costs of offering financial services across the borders of European Monetary Union (EMU) nations, making it easier for home and third nation banks to compete with host nation banks.8 Third, our measurement of bank reach is somewhat arbitrary and Eurocentric – we may classify some banks as global that only have substantial reach within Europe.