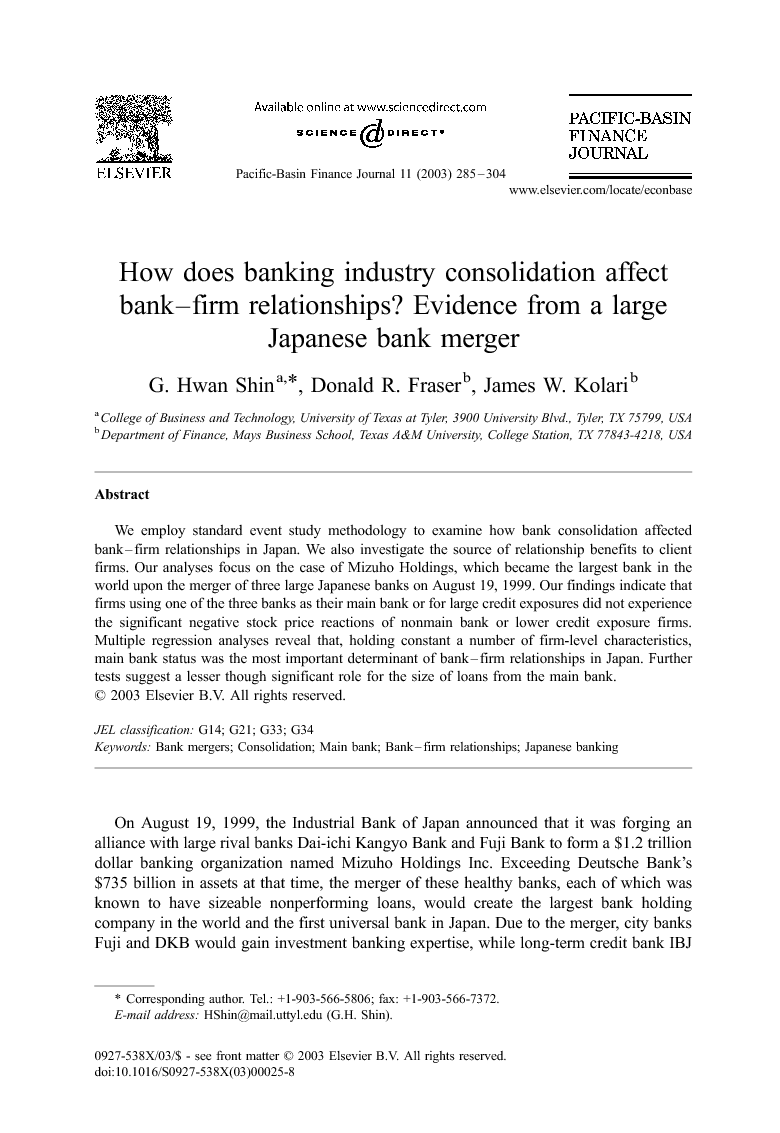 We employ standard event study methodology to examine how bank consolidation affected bank–firm relationships in Japan. We also investigate the source of relationship benefits to client firms. Our analyses focus on the case of Mizuho Holdings, which became the largest bank in the world upon the merger of three large Japanese banks on August 19, 1999. Our findings indicate that firms using one of the three banks as their main bank or for large credit exposures did not experience the significant negative stock price reactions of nonmain bank or lower credit exposure firms. Multiple regression analyses reveal that, holding constant a number of firm-level characteristics, main bank status was the most important determinant of bank–firm relationships in Japan. Further tests suggest a lesser though significant role for the size of loans from the main bank.

Our results provide evidence on how bank consolidation affects bank–firm relationships. The results clearly show that client firms were affected by the unprecedented Mizuho merger of three large Japanese banks to create the world's largest banking organization. In general, the merger had a negative effects on the share prices of borrowing firms. Further investigation shows that firms that had one of the three banks as their main bank or larger credit exposures from these banks experienced less (or no) significant negative stock price reactions. Investors apparently perceived that nonmain bank and lower credit exposure borrowers would be disadvantaged relative to main bank and high credit exposure firms. Multiple regression analyses further revealed that, holding constant a number of firm-level characteristics, main bank status was the most important determinant of bank–firm relationships in Japan, in contrast to the amount of credit outstanding from their banks. Also, our results suggest that the merger announcement appeared to have negative wealth effects for those firms that had more concentrated loan structures, were less profitable, or were part of Keiretsu relationships. Finally, the merger announcement tended to affect firms with more loan exposure to the main bank less negatively. The latter finding is interesting because it implies that a concrete relationship with a main bank is valuable to client firms.