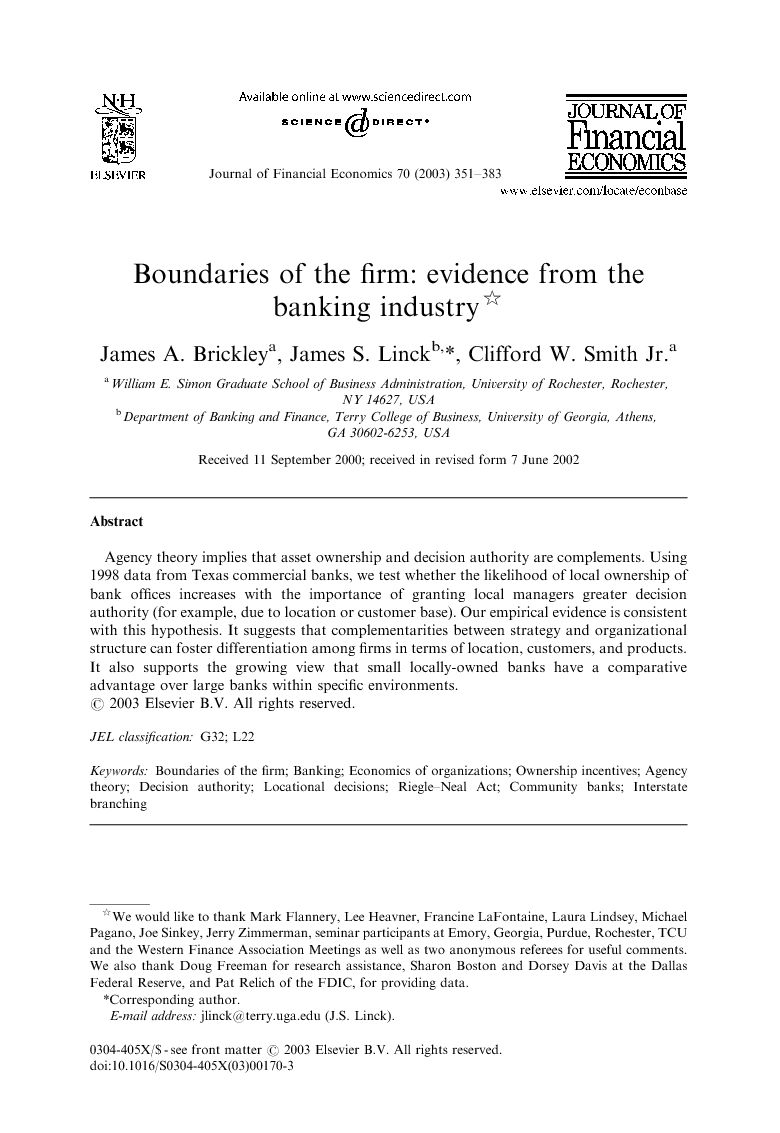 Agency theory implies that asset ownership and decision authority are complements. Using 1998 data from Texas commercial banks, we test whether the likelihood of local ownership of bank offices increases with the importance of granting local managers greater decision authority (for example, due to location or customer base). Our empirical evidence is consistent with this hypothesis. It suggests that complementarities between strategy and organizational structure can foster differentiation among firms in terms of location, customers, and products. It also supports the growing view that small locally-owned banks have a comparative advantage over large banks within specific environments.

There are over 3,000 commercial bank offices in Texas. Large banks with dispersed ownership own 49% of these offices, while small banks with relatively concentrated ownership own the remaining 51%. Most of the offices are affiliated with other offices as part of a branch system, though 8% are organized as stand-alone unit banks. In this paper, we use incentive-related arguments to analyze ownership patterns within this industry. Our results are consistent with the hypotheses that bank offices are more likely to be owned locally (vertically separate) when it is more important to grant significant decision rights to the local office managers (for example, due to the location of the office, the customer base, and the distribution of knowledge). In contrast to much of the prior empirical work on the boundaries of the firm, our focus is on ownership incentives, rather than firm-specific physical assets. Although our study examines the boundaries of the firm, we also provide insights into two other questions of broad interest. First, while theorists since Hotelling (1929) have questioned how firms make locational choices, limited empirical evidence exists on this issue. Of particular interest is whether firms strive for maximum or minimum differentiation. Our evidence suggests that certain types of banks strive to differentiate themselves from other banks both through locational choice and customer focus. Large banks tend to concentrate primarily on urban areas, while smaller locally owned banks focus more on smaller urban and rural areas. Individual banks tend to concentrate geographically. Designing an organization to serve one type of customer or location limits the ability of that organization to serve other types of customers and locations. This promotes differentiation across organizations. Second, the Riegle–Neal Act of 1994 materially reduces constraints on interstate bank branching. Opponents of this legislation have argued that large interstate banks would eliminate small community banks. Our evidence supports the growing view that small banks have a comparative advantage over large banks within identifiable environments. Our evidence suggests that one advantage of small banks is the incentives provided to local managers through concentrated share ownership. Petersen and Rajan (2002) argue that improvements in computer and information technology have reduced the importance of local information in evaluating loans to small businesses and thus have reduced the advantage that small banks traditionally have had in small business lending. Their empirical evidence supports the hypothesis that geographic distance between banks and their loan customers has become less important over time. An interesting question is whether or not the patterns we have found in our data will continue to hold as computer and information technology continues to improve. Our conjecture is that, while large banks are likely to continue to increase the amount of business they do with distant customers, small banks will continue to own many of the bank offices in less urban areas. We base this forecast on three arguments: First, local ownership provides important incentives to provide quality service to customers. An alternative is to have an employee manage the office and be monitored by central bank personnel. This alternative, however, is likely to be more expensive in rural locations (Brickley and Dark (1987) use related arguments to explain why isolated units in franchised systems tend to be franchised rather than company-owned). Second, while improvements in technology reduce the costs of processing and transferring information, they are unlikely to eliminate the importance of local manager information for all banking transactions (see Berger et al. (2001) for a related discussion). Third, some customers appear to prefer to deal with a community bank rather than a branch of a large bank with a distant headquarters. Indeed, this point is often the focus of marketing by small banks. Such product differentiation has the potential to help offset any cost disadvantages from operating at a smaller scale. These arguments imply that small banks will continue to play an important role in the economy in the foreseeable future.15