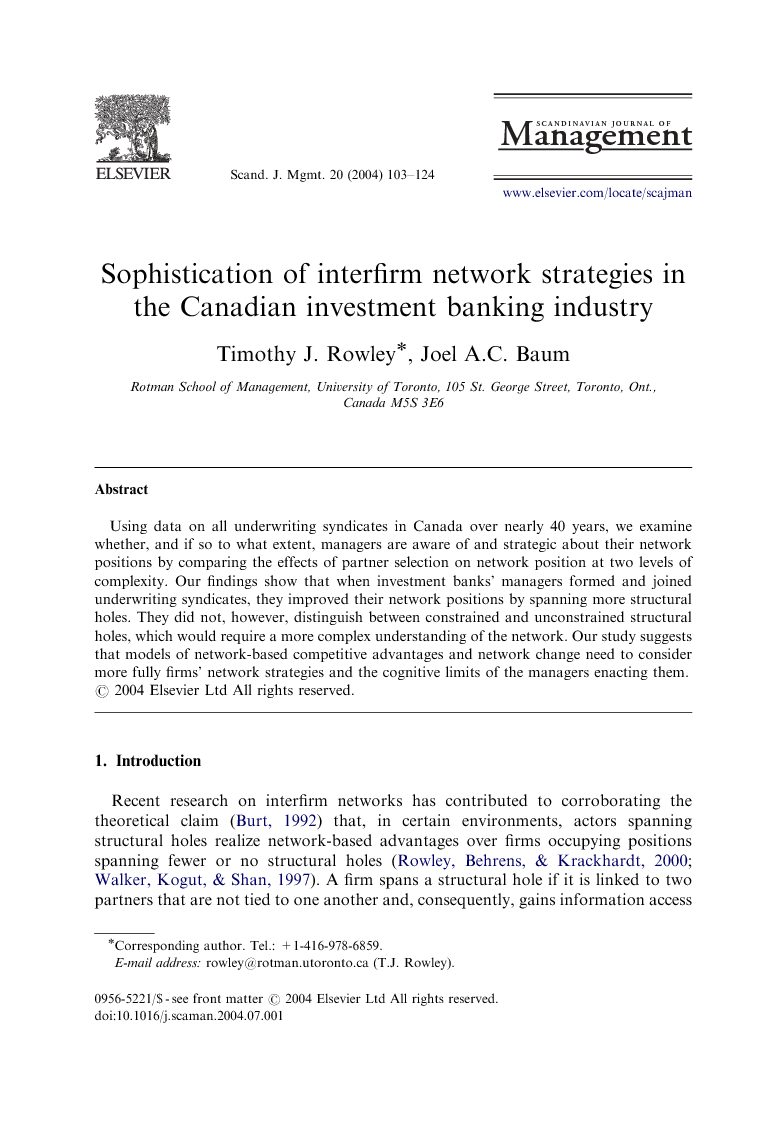 Using data on all underwriting syndicates in Canada over nearly 40 years, we examine whether, and if so to what extent, managers are aware of and strategic about their network positions by comparing the effects of partner selection on network position at two levels of complexity. Our findings show that when investment banks’ managers formed and joined underwriting syndicates, they improved their network positions by spanning more structural holes. They did not, however, distinguish between constrained and unconstrained structural holes, which would require a more complex understanding of the network. Our study suggests that models of network-based competitive advantages and network change need to consider more fully firms’ network strategies and the cognitive limits of the managers enacting them.

Recent research on interfirm networks has contributed to corroborating the theoretical claim (Burt, 1992) that, in certain environments, actors spanning structural holes realize network-based advantages over firms occupying positions spanning fewer or no structural holes (Rowley, Behrens, & Krackhardt, 2000; Walker, Kogut, & Shan, 1997). A firm spans a structural hole if it is linked to two partners that are not tied to one another and, consequently, gains information access and control benefits not available to other network positions. Firms spanning structural holes gain brokerage power by acting as intermediaries between disconnected partners who rely on them to facilitate exchange flows across the network. Competitive advantage also accrues in the form of unique information from non-redundant contacts, which economizes on the number of ties required to access timely and diverse information (Burt, 1992). Although there are other types of social capital serving different purposes (Burt, 1998), in uncertain and dynamic environments requiring firms to explore their surroundings for new information and know-how to continually adapt to their environments, structural holes represent a competitive advantage (Rowley et al., 2000; Rowley & Baum, 2002). Our study is motivated by two aspects of this research. First, social network research suggests that a firm's partnering choices, which determine in part its network position, contributes to the strength of a firm's competitive advantage (e.g., Podolny, 1993). Second, although it is increasingly clear that there are advantages associated with occupying particular interfirm network positions (e.g., Powell, Koput, & Smith-Doerr, 1996), it is unclear whether, or to what degree, managers are capable of conceptualizing their firms’ networks, comprehending the nature of network-based advantages, or using collaborative arrangements strategically to improve their network positions. There are two contrasting views on managers’ cognitive skills with respect to their firms’ networks and network strategies—the network strategy perspective and partnering strategy perspective ( Rowley & Baum, 2002). According to the network strategy perspective, managers understand the benefits realized from certain network positions and comprehend their networks sufficiently well to enable them to use their partnering decisions to maneuver strategically into beneficial network positions. Burt, for example, characterizes actors as alert to the locations of structural holes and their benefits, and so as actively seeking structural opportunities: “The task for a strategic player building an effective network is to focus resources on the maintenance of ties [spanning structural holes]” (1992, p. 30). Thus, as Burt (2001, p. 13) puts it, “the social benefits of [structural holes] are an incentive to build them.” Doreian agrees that actors should be and are strategic about social capital advantages: “Networks have instrumental character for network members as these members have structured goals and some goals are achieved through network choices” (2002, p. 95). One source of empirical evidence of firms engaging in network strategies is found in studies of interfirm status homophily, which show managers using information on the relative positions of firms in their network as a basis for partner selection (e.g., Podolny, 1993). The partnering strategy perspective, in contrast, views managers as more boundedly rational, focusing on selecting the most capable and reliable partners to create dyadic competitive advantages for specific alliance objectives, rather than considering how selecting particular partners affects the firm's network position and advantage. Much of the research on partner selection suggests that managers perform localized, myopic searches, evaluating potential allies based on first-hand knowledge and endorsements from common third parties regarding their capabilities and reliability, and showing a strong propensity to choose past partners and partners’ partners ( Chung, Singh, & Lee, 2000; Gulati, 1995; Gulati & Gargiulo, 1999; Uzzi, 1996). Thus, the partner selection perspective suggests that firms focus on establishing effective partnerships, and that effective network positions are emergent phenomena that result from these choices ( Gulati & Gargiulo, 1999). In this study, we examine whether and, if so to what extent, managers are strategic about their network positions. Specifically, we ask: Do managers make partner-selection decisions that are consistent with the notion of the network strategy perspective? And, if so, how sophisticated are the network strategies managers enact? We confront the former question by empirically examining whether or not firms’ managers improve their firms’ network positions when they select partners. We address the latter question by comparing the effects of firms’ partner selection on their network positions at two levels of complexity. At the first level of complexity, we examine whether managers use partnering opportunities to span structural holes, which requires managers to have a deeper understanding of their firm's network and network advantages than is implied by the partnering-strategy perspective. At the second level, we investigate whether managers are able to differentiate between constrained and unconstrained structural holes, the latter of which provide superior returns, when selecting partners. Following Burt (1992), we define constraint as the extent to which a firm has invested in ties with partners (and partners’ partners) that span many of the same structural holes as the firm, and thus provide more limited brokering advantage. Differentiating structural holes on the basis of their constraint represents a more sophisticated network strategy that requires managers to have a more detailed comprehension of their networks to enact. We examine firms’ network strategies in a study of all underwriting syndicates formed by investment banks in Canada between 1952 and 1990. This empirical setting provides an opportunity to comprehensively track firms’ partnering behavior over time and to assess how their partnering decisions shape their network positions. Notably, these syndicate relationships are meaningful beyond the task of underwriting new capital issues. These ties act as conduits to new underwriting opportunities and diverse groups of investors, and thus contributing to banks’ reputations and performance (Podolny, 1993).