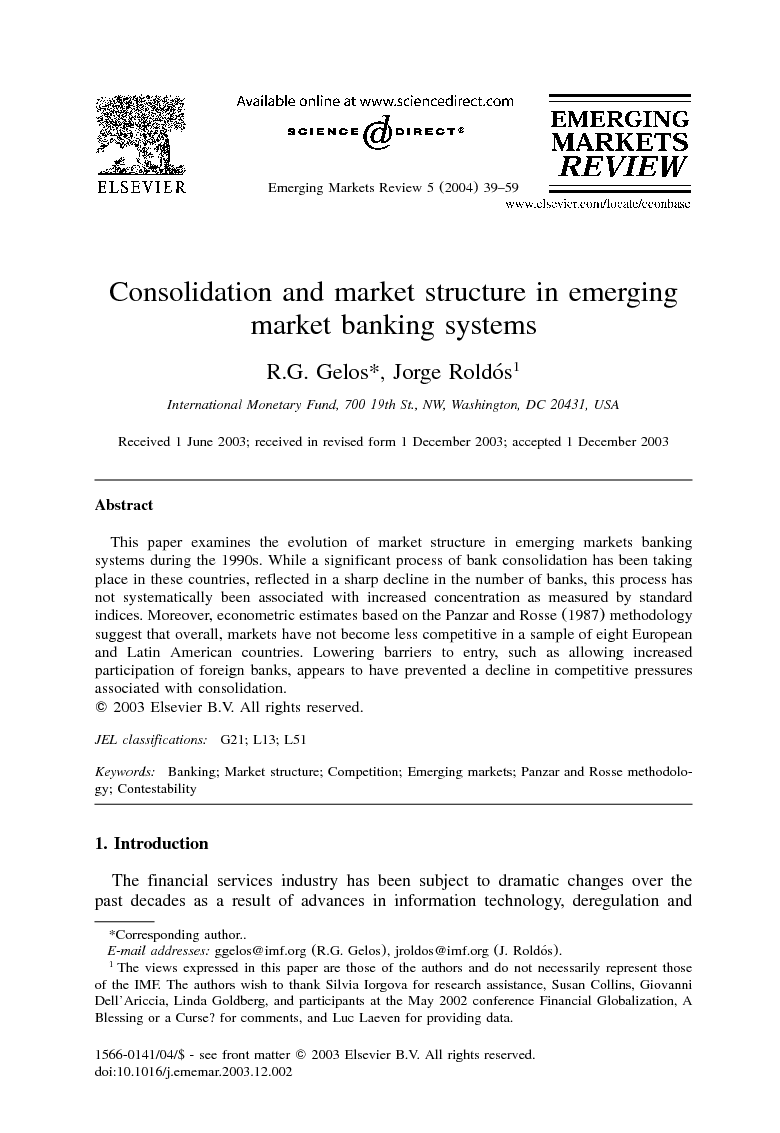 This paper examines the evolution of market structure in emerging markets banking systems during the 1990s. While a significant process of bank consolidation has been taking place in these countries, reflected in a sharp decline in the number of banks, this process has not systematically been associated with increased concentration as measured by standard indices. Moreover, econometric estimates based on the Panzar and Rosse (1987) methodology suggest that overall, markets have not become less competitive in a sample of eight European and Latin American countries. Lowering barriers to entry, such as allowing increased participation of foreign banks, appears to have prevented a decline in competitive pressures associated with consolidation.

The financial services industry has been subject to dramatic changes over the past decades as a result of advances in information technology, deregulation and globalization. This has reduced margins in traditional banking activities, leading banks to merge with other banks as well as with non-bank financial institutions, both at home and abroad. The ongoing process of consolidation has raised a number of positive and normative issues for both mature and emerging banking systems (see, for instance, Group of Ten, 2001 and International Monetary Fund, 2001); one important question is whether consolidation has reduced competition. In this paper, we review the main characteristics of the consolidation process in the major emerging market banking systems and we study its impact in the market structure of the industry. The forces driving the consolidation process are similar in both mature and emerging markets, but the latter show some distinguishing features. First, while cross-border mergers and acquisitions are the exception in the mature markets, they account for a large share of the consolidation activity in emerging markets. Second, while consolidation in the mature markets has served to eliminate excess capacity more efficiently than bankruptcy or other means of exit, in emerging markets consolidation has often been a way of dealing with problems stemming from financial crises. Third, the authorities played a major role in the consolidation process in emerging markets, whereas the role of markets forces was more dominant in the mature markets. While a number of studies have examined the effects of bank consolidation on competitive conditions in mature markets, hardly any systematic research has been carried out for emerging economies. We attempt to fill this gap. First, we discuss the main forces shaping bank consolidation in major emerging markets and describe the patterns of consolidation and concentration using traditional indicators of market structure. Then, we employ the method developed by Panzar and Rosse (1987) to assess changes in the competitive structure in these markets following the consolidation process of the second half of the 1990s. This approach, which is based on the relationship between revenue and marginal costs, has typically been applied to cross-sectional data from developed countries.2 By contrast, the panel data approach followed here allows for assessing changes in market structure over time, in addition to providing more reliable estimates. We find that while the number of banks has fallen in all the emerging markets covered in this study during the period 1994–2000, this decline has not systematically resulted in an increase in concentration. In central Europe, for instance, a reduction of the number of banks has been associated with lower concentration—as measured by the share in total deposits of the largest banks and by Hirshman–Herfindahl (HH) indices—since the large, former state-owned savings banks have been losing market share to the more dynamic medium-sized banks. In most of the Asian crises countries, government-led restructuring processes have led to a drop in the number of banks, but the degree of concentration also fell—with the exception of Malaysia. The process of bank consolidation is more advanced in Latin America, as a result of the earlier occurrence of crises and foreign bank entry; in this region, the reduction in the number of banks has been accompanied with a clear increase in the level of concentration in the industry. There is no indication of a broad decline in competition intensity. In accordance with the results found in the literature for most of the mature markets, our estimations indicate that emerging banking markets are characterized by monopolistic competition. Moreover, our results suggest that lowering barriers to entry and allowing for increased participation of foreigners in domestic banking markets has to some extent offset any adverse effects on competition intensity brought about by consolidation in the banking sector.3 For example, there is a positive correlation between the index of competition intensity obtained through the Panzar-Rosse methodology and indices of foreign bank participation. However, the process is still evolving, and particularly in central Europe, it may still be too early for a definitive assessment. Our findings are in line with some, albeit not all, studies for mature markets. Part of the available evidence for Europe and the US supports the notion that consolidation and the resulting drop in the number of banks allows banks to exercise more market power, but the results are generally mixed.4 Moreover, the relationship between market concentration and market power seems to have weakened recently in advanced economies; banking markets appear to have become more competitive due to deregulation, globalization and technological progress (see Berger et al., 1999, Canoy et al., 2001, Hannan, 1997 and Radecki, 1998). For Germany, Hempell (2002) reports a similar result as presented here: despite a drop in the number of banks during 1993–1998, no significant change in the competitive behavior of banks can be detected.

The process of consolidation in emerging market banking systems has, to a large extent, not yet translated into a decline in competitive pressures. To some degree, this may be due to the fact that the process is yet in its infancy in some of the countries analyzed here, particularly in Central Europe and Turkey. Nevertheless, the results for two countries in which the consolidation process is more advanced, namely Argentina and Mexico, shows that the ultimate effect on competition intensity is by no means obvious. We do find support for the view that foreign bank competition has attenuated any decline in competition intensity stemming from consolidation. However, going forward one should not conclude that the potential for increases in market power is absent even if consolidation proceeds further in the emerging markets. In some instances, local authorities have already acted on preventing the creation of institutions that were perceived as too dominant, probably with good reasons. For example, the potential merger between the two largest Mexican banks—which would have created an institution with control over 40% of the system's deposits—raised concerns among the regulatory authorities and finally did not come through. Similarly, the control of the two largest Chilean banks (commanding 27% of deposits) by Spain's BSCH, prompted the authorities to modify the Banking Law and require authorization when a merger leads to the creation of an institution that controls more than 20% of deposits.30 An important, related issue, is whether consolidation and increased foreign competition could restrict access to credit for smaller enterprises—even if it does not lead to less overall competition. Large foreign banks are often seen as shying away from lending to smaller and non-transparent firms.31 Hence, emerging markets may have to strengthen efforts to adopt international accounting standards and increase transparency in the corporate sector, to ensure that the process of consolidation with increased foreign bank competition trickles down the credit spectrum to smaller enterprises as well. Further examination of how consolidation and foreign bank participation is changing the financial services landscape in emerging markets, including the implications for prudential regulation, competition regulation, and macroeconomic policies, remains an important area of research.