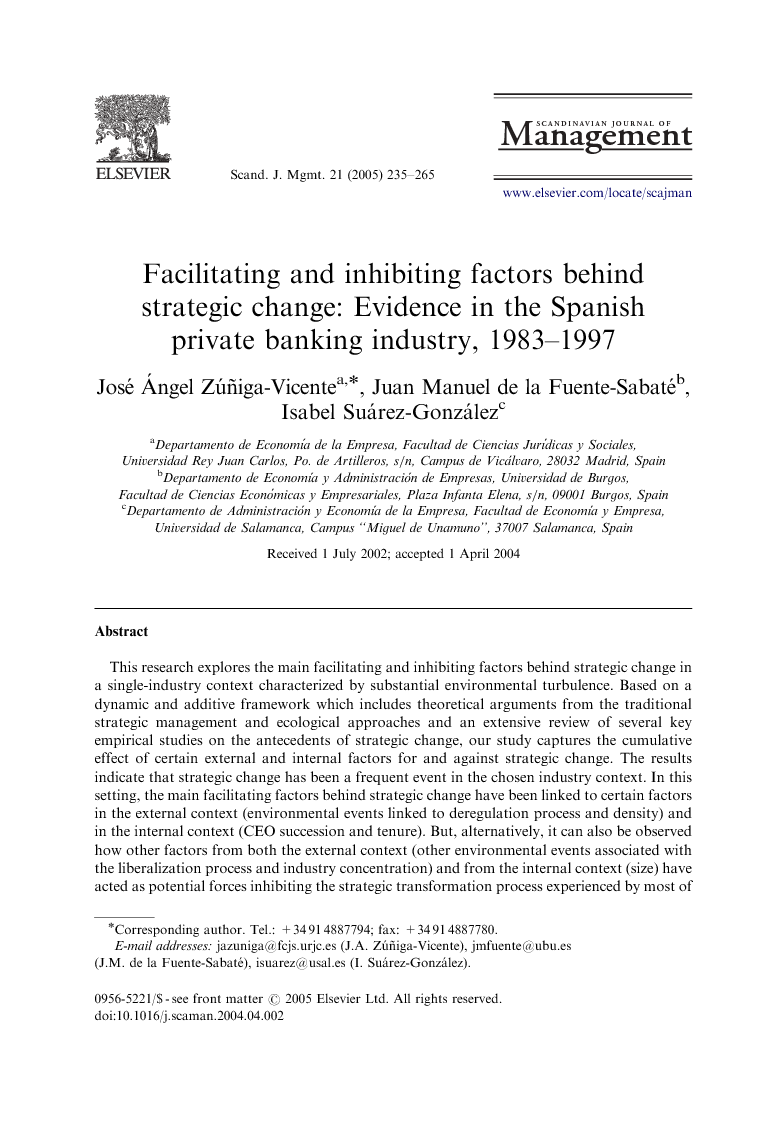 This research explores the main facilitating and inhibiting factors behind strategic change in a single-industry context characterized by substantial environmental turbulence. Based on a dynamic and additive framework which includes theoretical arguments from the traditional strategic management and ecological approaches and an extensive review of several key empirical studies on the antecedents of strategic change, our study captures the cumulative effect of certain external and internal factors for and against strategic change. The results indicate that strategic change has been a frequent event in the chosen industry context. In this setting, the main facilitating factors behind strategic change have been linked to certain factors in the external context (environmental events linked to deregulation process and density) and in the internal context (CEO succession and tenure). But, alternatively, it can also be observed how other factors from both the external context (other environmental events associated with the liberalization process and industry concentration) and from the internal context (size) have acted as potential forces inhibiting the strategic transformation process experienced by most of the firms examined. We conclude by discussing the possible use of our framework in future research, with a view to further extending our understanding of potential antecedents of strategic change.

Probably one of the most relevant debates in the literature of strategic change concerns how and why organizations change their strategies (Ginsberg, 1988; Rajagopalan & Spreitzer, 1996 and Van de Ven & Scott, 1995 provide extensive reviews on this topic). In particular, a growing interest can be observed in seeking to identify the fundamental types of factors that elicit strategic change in firms over time. However, after more than three decades of research on this topic the findings to emerge from a large body of empirical studies produced by a variety of researchers are contradictory, and the basic question—what type of factors can be considered as constraining or promoting factors behind strategic change—remains open to discussion. The results are sometimes completely different, depending on the theoretical position and method adopted by the individual researchers. Consequently, as Rajagopalan and Spreitzer (1996) and many others have pointed out, the continual accumulation of contradictory findings currently being drawn from very concrete theoretical viewpoints is adding little to researchers’ understanding of the antecedents of strategic change. In view of this, the main purpose of the present study is to examine from different theoretical perspectives the factors that explain strategic change (as either facilitating or inhibiting factors) in a population of financial firms that has been undergoing continuous and radical shifts in its environmental conditions over the last two decades. After exploring whether strategic changes undertaken by firms in this industry have been rare or common in response to new environmental conditions, we seek answers specifically to the following questions: (1) what were the main environmental factors associated with this industry that have facilitated or inhibited the likely occurrence of strategic change? (2) what were the main organizational factors that have impeded or reinforced the probability of strategic change? and (3) has the firm's chief executive played a significant or a non-significant role affecting the probability of strategic change? In seeking to answer such questions we have used a longitudinal and additive framework. This framework is the result of an extensive review of several key empirical studies. It is also a direct consequence of the simultaneous introduction of factors and widely diverging theoretical arguments from two of the most important research streams that have been examining the antecedents of strategic change over the last three decades, and that have usually been viewed as the poles on a continuum, namely, traditional strategic management (TSM) and the ecological approach. With the help of this framework we seek to evaluate empirically the theoretical validity of various arguments relating to the two perspectives and, thus also their capacity to make predictions about the concrete set of factors associated with each of the two that have affected the likely occurrence of strategic change and the direction (facilitating or inhibiting) in which they have done so. In fact, an important supplementary aim of our investigation has been to show that in order to understand better the facilitating and inhibiting antecedents of strategic change we need to consider factors and theoretical arguments from both approaches. To examine all these issues empirically we estimate different models that include factors associated with each approach separately and others applying to them both. The most important ways in which we hope our investigation will make an important contribution can be summarized as follows: first, to redirect the attention of strategic change theory to additive and time-related frameworks for some of the antecedents of strategic change in a more specific way; second, to design a new method which can facilitate replication for future research on this topic in similar settings; and finally, with the help of the framework developed here, to go some way towards systematizing more than three decades of continuous and contradictory research on this important topic in the literature on organizations.