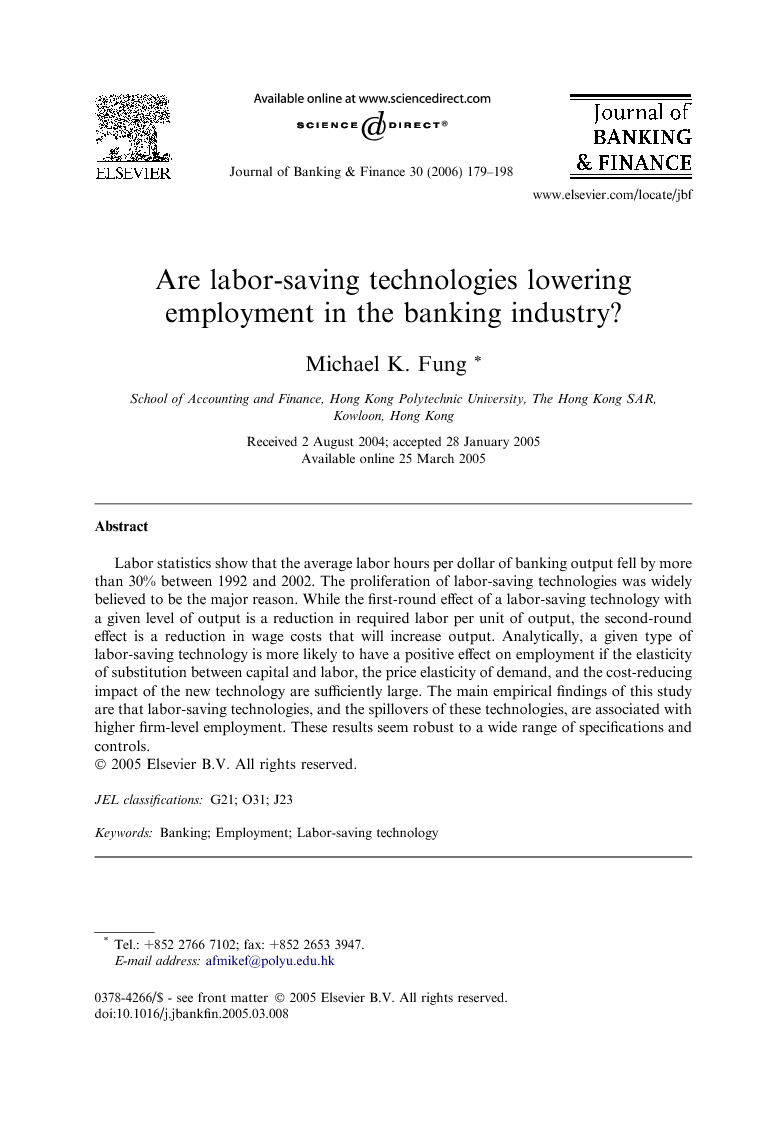 Labor statistics show that the average labor hours per dollar of banking output fell by more than 30% between 1992 and 2002. The proliferation of labor-saving technologies was widely believed to be the major reason. While the first-round effect of a labor-saving technology with a given level of output is a reduction in required labor per unit of output, the second-round effect is a reduction in wage costs that will increase output. Analytically, a given type of labor-saving technology is more likely to have a positive effect on employment if the elasticity of substitution between capital and labor, the price elasticity of demand, and the cost-reducing impact of the new technology are sufficiently large. The main empirical findings of this study are that labor-saving technologies, and the spillovers of these technologies, are associated with higher firm-level employment. These results seem robust to a wide range of specifications and controls.

Labor statistics (see Fig. 1) show that while aggregate output in the banking industry increased from $281,105 to $408,218 million, or by 45%, in real terms between 1992 and 2002, banking employment stagnated within the range of 3151–3313 million labor hours in the same period. In other words, the average labor hours per dollar of banking output fell by more than 30% within this period. There are two commonly cited explanations for the contraction of banking employment: banking consolidation caused by deregulation of interstate expansion and the emergence of labor-saving technologies.1 Full-size image (23 K) Fig. 1. Banking output (in 1996 dollars) and employment from 1992 to 2002 (Source: Bureau of Labor Statistics). Figure options The rationale behind the first explanation is that the acquisition of a smaller bank by a bank holding company could result in the elimination of duplicate positions and branches with duplicate functions. However, results from past studies (see, for example, Rhoades, 1986, Rhoades, 1990, Rhoades, 1993, Linder and Crane, 1992, Srinivasan, 1992 and Srinivasan and Wall, 1992; Berger and Humphrey, 1992) have shown no evidence for such a relationship between consolidation and cost-efficiency in the banking industry, which implies that mergers do not necessarily lead to a decrease in employment.2Jayarathne and Strahan (1996) even found an increase in employment after banking deregulation. As a consequence, the proliferation of labor-saving technologies is widely believed to be the major reason for the recent contraction in banking employment. The banking industry in the 1990s, especially commercial banking, experienced pronounced shifts in the techniques by which banking services were produced and distributed as computer technologies and related information-processing technologies were developed. The production of banking services was traditionally labor-intensive until the introduction of new labor-saving technologies such as electronic funds transfer, automated teller machines (ATM), counter terminals, check truncation, and home banking. Examples that apply to routine transactions include the increasing reliance on point-of-sale debit transactions using bank cards, the increasing availability and use of banking by phone and personal computer, and the growth of in-store branches. Banks have also instituted labor-saving technologies to cut the cost of labor. One example is credit scoring, a statistically based method for evaluating loan applications and expected repayment performance, which is being applied to consumer and business loans (Valletta, 1999). Most mortgage banks now make “cookie cutter” loans that are based on preset formulae and bundled together for resale to financial markets. Recent studies indicate that this approach is generally better at reducing bad loans than loan officers (Gruenstein, 1997). These technological changes tend to reduce the need for traditional “brick-and-mortar” bank offices through their replacement by automated and centralized facilities. The most obvious effect of these technological changes on employment is the reduced need for bank staff due to the reduction in branches per dollar of banking output.3 Therefore, the “first-round” effect of a labor-saving technology with a given level of output is a reduction in required labor per unit of output. However, apart from this first-round effect, there is a “second-round” effect resulting from reductions in wage costs and possibly other factor costs that will increase output. Which of these two effects dominates is a crucial factor in evaluating the effect of technology on employment. For instance, the explosion in the volume of ATM transactions in the 1980s was often considered a primary reason for dwindling payrolls in the banking sector because ATMs have transformed what were fully staffed branch offices in the 1970s into today’s sparsely staffed single branch. However, ATMs have also expanded the range and amount of the output of banks, such as by allowing people to withdraw cash easily, which has increased the demand for banking services and employment (Craig, 1997). By the same token, information-processing technology can, on the one hand, lower the labor input required to process each financial transaction; on the other hand, it can tremendously increase the total volume of financial market activities (Valletta, 1999). As Klette and Forre (1998) have argued, the second-round increase in output will offset the first-round effect, and even reverse the reduction in demand for labor, if the demand facing the firm in question is elastic and the new technology is not too strongly focused on saving labor relative to saving other factors of production. The key question addressed in this study is a simple one: Are labor-saving technologies actually lowering employment in the banking industry? The rest of this article is organized as follows. Sections 2 and 3 respectively sketch the theoretical and empirical frameworks. Section 4 presents a detailed description of the data, and Section 5 discusses the results. Conclusions are drawn in Section 6, the final section.

The objective of this study is to examine the relationship between labor-saving technologies and employment in the banking industry. The first-round effect of a labor-saving technology with a given level of output is a reduction in required labor per unit of output. Apart from this first-round effect, however, there is a second-round effect resulting from reductions in wage costs and possibly other factor costs that will increase output. Which of these two effects dominates is a crucial factor in evaluating the effect of a particular kind of labor-saving technology on employment. Analytically, a given type of labor-saving technology is more likely to have a positive effect on employment if the elasticity of substitution between capital and labor, the price elasticity of demand, and the cost-reducing impact of the new technology are sufficiently large. The main empirical finding is that labor-saving technologies are associated with higher firm-level employment. This result seems robust to a wide range of specifications and controls. Another interesting finding is the spillovers of patented process innovations, and thus employment externalities, from the innovating banks to the non-innovating banks. This suggests that patent protection for process innovations is quite limited and that process innovations developed by the innovating banks can speedily transit across the boundaries of firms. Apart from their effect on the number of jobs, labor-saving technologies are likely to have an effect on the skill-structure of employment as well. There is a consensus in past literature that the changes in technology that have occurred over the past decades are responsible for changes in the skill-structure of employment (see, for example, Goldin and Katz, 1998, Adams, 1999 and Bartel and Sicherman, 1999; Krusell et al., 2000). The increased employment of high-skilled labor may be related to a changing workplace organization marked by a greater reliance upon computers and communication technologies, in which a different set of skills is required. For instance, the use of phone centers is growing rapidly among the largest retail banks. In addition to being a service department for existing customers, phone centers are now used by new customers to open accounts or to establish a home equity line of credit. As a result of increasing call volumes, phone center staff represent a rising portion of total banking employment. Craig (1997) examination of the occupational make-up of the banking industry suggests that workers are indeed more skilled than they were 20 years ago. The work by Demsetz (1997) shows that the skill set of workers in the banking, financial, insurance, and real estate industries has increased steadily over the past decades. To what extent are the results of this study generalizable for the banking industry? It is likely that this study may actually be underestimating the effects of labor-saving technologies because no controls have been made for the fact that innovators are more likely to survive than non-innovators. Therefore, a possible extension is to consider the differential effect of labor-saving technologies through their life cycle, taking into account not only the first introduction of these technologies but also their subsequent diffusion through the industry. The development of a longitudinal database of labor-saving technologies and banks would be a major task for those concerned with the dynamic effect of these technologies on employment in the banking industry.