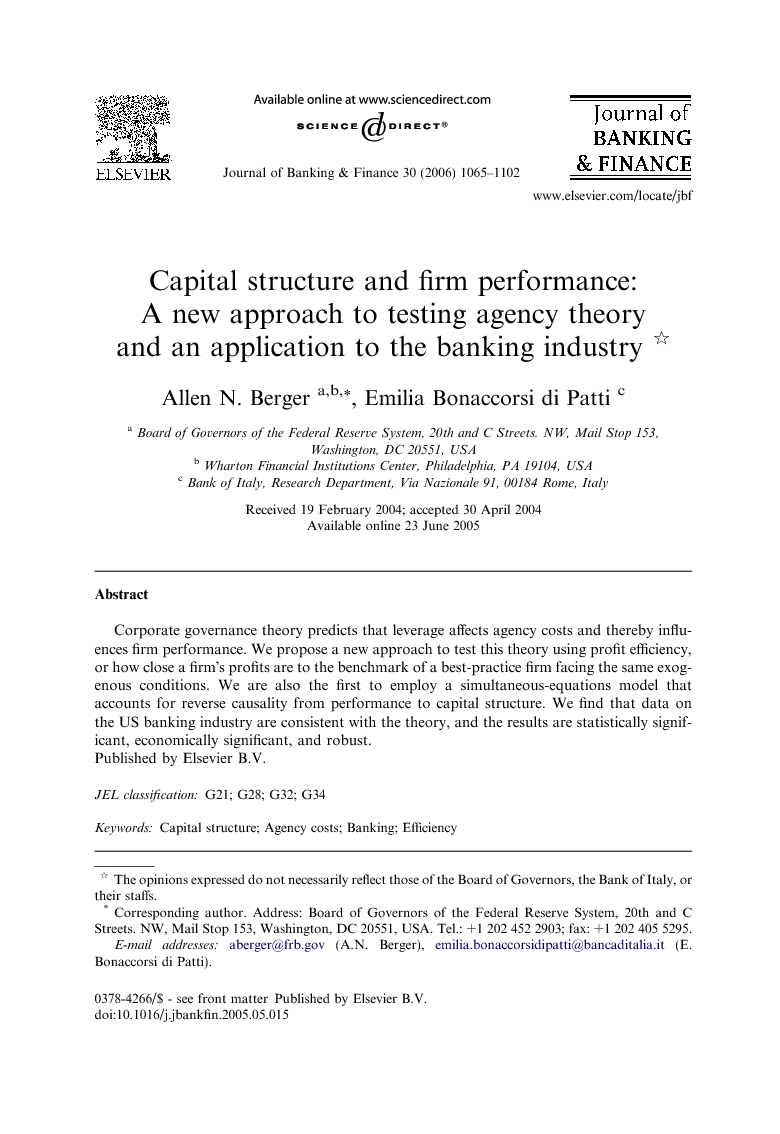 Corporate governance theory predicts that leverage affects agency costs and thereby influences firm performance. We propose a new approach to test this theory using profit efficiency, or how close a firm’s profits are to the benchmark of a best-practice firm facing the same exogenous conditions. We are also the first to employ a simultaneous-equations model that accounts for reverse causality from performance to capital structure. We find that data on the US banking industry are consistent with the theory, and the results are statistically significant, economically significant, and robust.

We test the agency costs hypothesis, an empirical description of a well-known hypothesis in corporate finance. Under this hypothesis, higher leverage reduces the agency costs of outside equity and increases firm value by constraining or encouraging managers to act more in the interests of shareholders. However, when leverage becomes relatively high, elevating the expected costs of financial distress, bankruptcy, or liquidation, the agency costs of outside debt may overwhelm the agency costs of outside equity, so further increases in leverage result in higher total agency costs. In this study, we use profit efficiency as an indicator of firm performance to measure agency costs and employ a two-equation structural model that also takes into account reverse causality from firm performance to capital structure. Our main findings are consistent with the agency costs hypothesis – higher leverage or a lower equity capital ratio is associated with higher profit efficiency over almost the entire range of the observed data. The effect is economically significant as well as statistically significant. For example, an increase in leverage as represented by a 1 percentage point decrease in the equity capital ratio yields a predicted increase in standard profit efficiency of about 16 percentage points at the sample mean in our main findings. The data are not consistent with reversal of the relationship when leverage is high, although we find some evidence of a smaller marginal effect of equity capital when leverage is very high, possibly reflecting some offsetting effects from the agency costs of debt. With respect to the reverse causality from efficiency to capital structure, we offer two competing hypotheses with opposite predictions, and we interpret our tests as suggesting which hypothesis may empirically dominate the other in affecting the equilibrium capital structure. Under the efficiency-risk hypothesis, the expected high earnings from greater profit efficiency substitute for equity capital in protecting the firm from the expected costs of bankruptcy or financial distress, whereas under the franchise-value hypothesis, firms try to protect the expected income stream from high profit efficiency by holding additional equity capital. We find that neither hypothesis of reverse causality from efficiency to equity dominates the other over the range of the data. The findings in the paper are generally robust to a number of tests. These include the use of different functional forms (linear, quadratic, spline), different measures of performance (standard and profit efficiency – each measured different ways – and return on equity), different samples (ownership sample, full sample, ranges of inside ownership, excluding those with high growth), different sample periods (1990s and 1980s), and different modeling approach (structural model versus Granger causality tests). The results in this paper – which are consistent with the agency costs hypothesis – stand in contrast to the mixed empirical evidence in the banking literature and in the finance literature as a whole. A likely reason for the difference in our view is our different methodology, including the specification of profit efficiency as an inverse measure of agency costs and the use of a structural model to address the problem of reverse causality. Future studies using these methods would be needed to clarify this issue. Finally, we note that the approach developed here can be built upon to test other hypotheses with predictions for agency costs using data from virtually any industry.