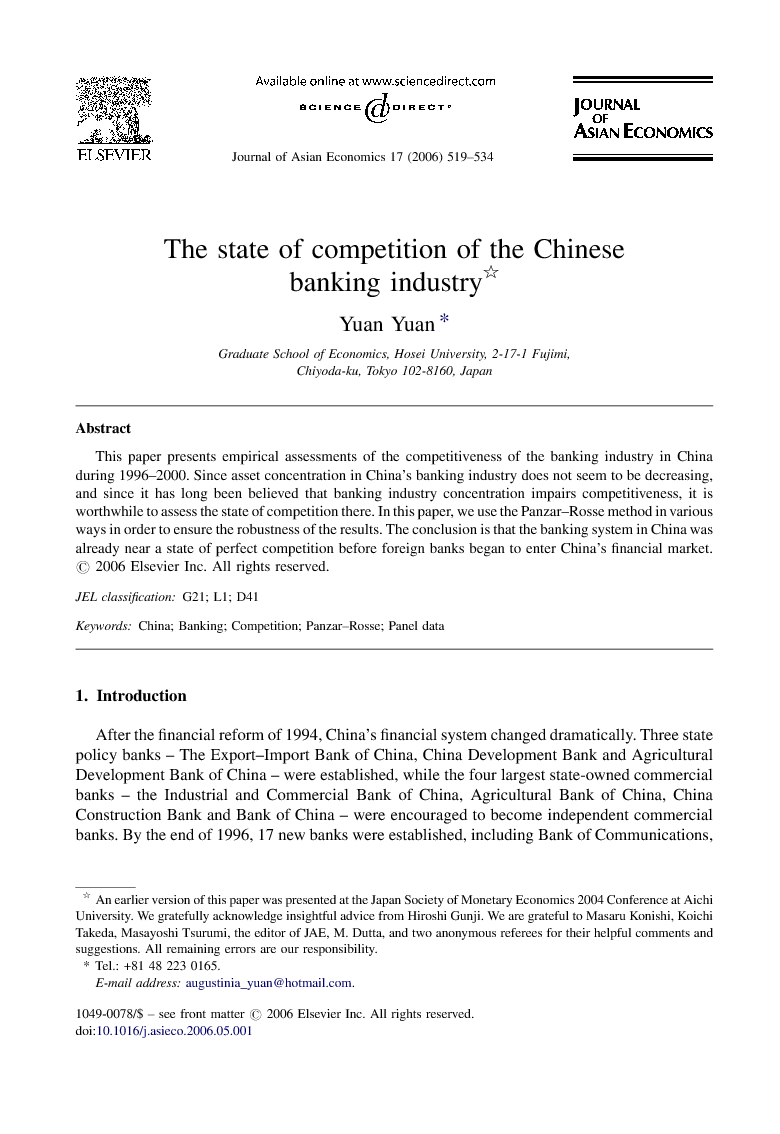 This paper presents empirical assessments of the competitiveness of the banking industry in China during 1996–2000. Since asset concentration in China's banking industry does not seem to be decreasing, and since it has long been believed that banking industry concentration impairs competitiveness, it is worthwhile to assess the state of competition there. In this paper, we use the Panzar–Rosse method in various ways in order to ensure the robustness of the results. The conclusion is that the banking system in China was already near a state of perfect competition before foreign banks began to enter China's financial market.

After the financial reform of 1994, China's financial system changed dramatically. Three state policy banks – The Export–Import Bank of China, China Development Bank and Agricultural Development Bank of China – were established, while the four largest state-owned commercial banks – the Industrial and Commercial Bank of China, Agricultural Bank of China, China Construction Bank and Bank of China – were encouraged to become independent commercial banks. By the end of 1996, 17 new banks were established, including Bank of Communications, CITIC Industrial Bank, and China Merchants Bank, with different characteristics from the four largest banks. Their business area is not restricted by the state, and they can operate fairly freely. Since China became a Member State of the WTO in 2001, the entry by foreign financial institutions into China has accelerated. Banks now have to be managed efficiently. The number of banks and the inflow of foreign investment have increased rapidly, and competition in the banking sector has become much more severe over the past several years. It is a common belief that China's banking sector is not very competitive, though to our knowledge there have been no empirical assessments of it. Recently, many empirical assessments analyzing banking competition have been published. Claessens and Laeven (2004) use the method of Panzar and Rosse (1987) to examine the banking industry in 50 countries, and conclude that nearly all countries have monopolistic competition. The competition in Brazil, Mexico and UK is much higher than in the US. Shaffer and Disalvo (1994) find that Pennsylvania in the US has duopoly market conditions, but that the degree of banking industry competition is still high. Murjan and Ruza (2002) assess the Arab Middle Eastern banking markets, and Gelos and Roldos (2002) examine the banking industry in eight countries in Latin America and Europe. All these surveys use the Panzar and Rosse model, and find that the banking industries in almost all countries are in a state of monopolistic competition. The aim of this paper is to analyze the degree of competition of the banking industry in China before its affiliation with the WTO, using a rigidly statistical technique, i.e., the method of Panzar and Rosse. Generally speaking, the banking system in China is close to perfect competition, and the degree of competition is considerably higher than in other countries. Looking at individual years, 1996, 1997, 1999 and 2000 are found to feature perfect competition and 1998 to have monopolistic competition, with the data indicating a very high degree of competition. The four largest banks in China over 1996–2000 were in a state of monopolistic competition. On the other hand, it is surprising that, from 1996 to 2000, the competition among small-scale banks was perfect. We checked the robustness of these results using some dummy variables, but they were hardly affected. This implies that, before China acceded to the WTO in 2001, its banking system was already quite competitive. From the results above, it is found that opening the Chinese banking market to foreign institutions will not promote further competition, though it will have effects on firms’ financing. This paper is organized as follows. Section 2 introduces the Panzar–Rosse method as described in Nathan and Neave (1989) and previous studies. Section 3 presents the situation of the Chinese banking system and the characteristic of the data. Section 4 provides the empirical analysis. Section 5 draws conclusions.

In this paper, we have used the Panzar–Rosse method to assess competition in the banking industry in China from 1996 to 2000 in various ways. The Chinese banking system as a whole is in a state of near perfect competition, with a higher degree than other countries shown in previous studies. H-statistic is used in many previous studies that make international comparisons, such as Claessens and Laeven (2004) or Bikker and Haaf (2002). However, it is necessary to focus attention on differences in market structure or numerical statements. In this paper, we cannot reject perfect competition in many cases. As a result, we can assert that Chinese banking industry is highly competitive by international standards, for Claessens and Laeven (2004), Bikker and Haaf (2002) and other previous studies have investigated many countries but in almost all cases, perfect competition is rejected. By year, for example, 1996, 1997, 1999 and 2000 featured perfect competition, while 1998 was in monopolistic competition but with a high degree of competition. On the other hand, it is surprising to find that the competition among small banks from 1996 to 2000 was perfect. Since the dummy variables for the four largest banks and for banks that operate over the whole country have little effect on the estimation, we believe the results are robust. From these results, we can surmise that before its accession to the WTO, China's banking industry already had the characteristics of competitiveness. It seems that opening the Chinese banking market to foreign firms will not promote further competition in China, though it might have effects on firms’ financing. However, there are some problems in this paper, such as the fact that data on wages and salaries, and long time series data are not available. If these problems can be solved, the competitiveness of the Chinese banking industry could be estimated much more correctly. It would also be meaningful to test the competitiveness after China's accession to the WTO (after 2001), and the competitiveness of other developing countries.