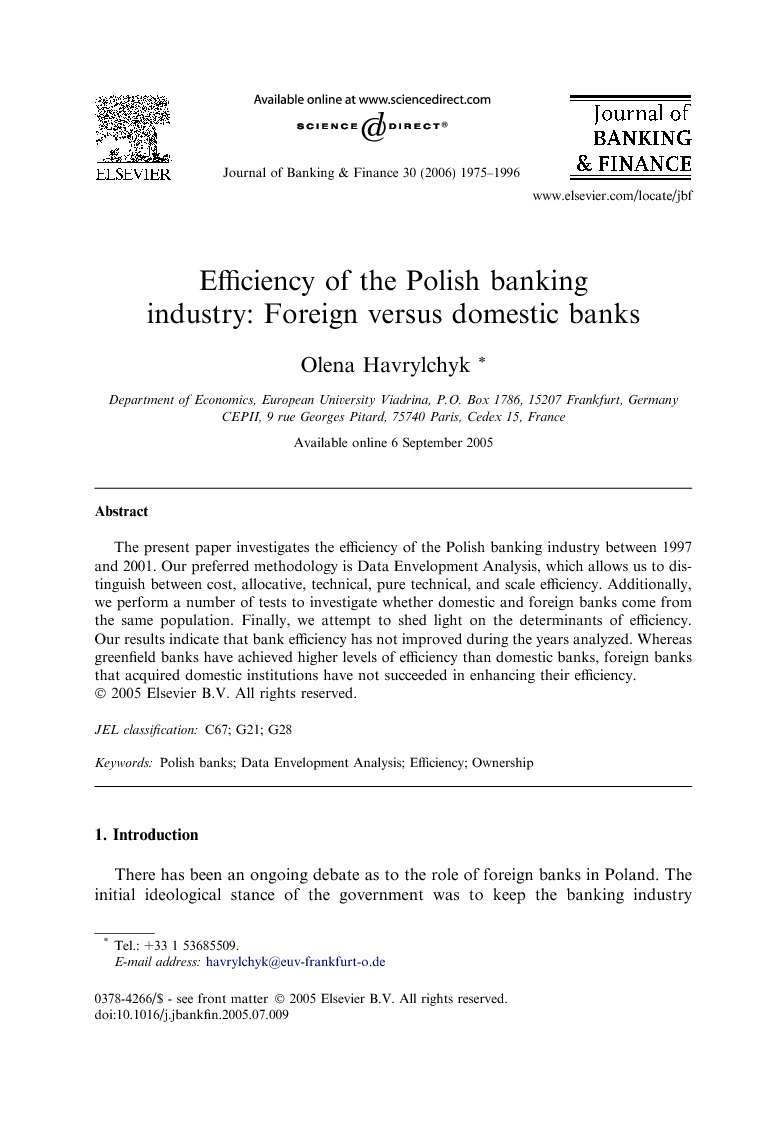 The present paper investigates the efficiency of the Polish banking industry between 1997 and 2001. Our preferred methodology is Data Envelopment Analysis, which allows us to distinguish between cost, allocative, technical, pure technical, and scale efficiency. Additionally, we perform a number of tests to investigate whether domestic and foreign banks come from the same population. Finally, we attempt to shed light on the determinants of efficiency. Our results indicate that bank efficiency has not improved during the years analyzed. Whereas greenfield banks have achieved higher levels of efficiency than domestic banks, foreign banks that acquired domestic institutions have not succeeded in enhancing their efficiency.

There has been an ongoing debate as to the role of foreign banks in Poland. The initial ideological stance of the government was to keep the banking industry “national”, because foreign capital was regarded as hostile to “Polish interests” (Balcerowicz and Bratkowski, 2001). Between 1993 and 1997 foreign banks were limited to greenfield operations or taking over distressed institutions, and were entitled to minority shares during the privatization process. As EU aspirations developed the restrictions on foreign bank entry and participation in the privatization process were repealed. Foreign banks have entered the Polish market either by establishing greenfield institutions or acquiring domestic banks. As a result the assets controlled by foreign banks1 have increased from 15.3% of total banking assets in 1997 to 69.2% in 2001. The literature on bank efficiency and the role of foreign banks is dominated by studies about the US, and to a smaller degree European, banking industries (Berger and Humphrey, 1997). Efficiency studies found that foreign banks in developed countries exhibited lower efficiency in comparison with domestic banks. However, banks from certain countries were able to operate more efficiently than domestic banks in other developed countries (Berger et al., 2000). Even though the research on transition and developing markets lags far behind, the findings support the conclusion that foreign banks in these countries succeeded in exploiting their comparative advantages and show higher efficiency than their domestically owned counterparts (Isik and Hassan, 2002, Grigorian and Manole, 2002, Hasan and Marton, 2003 and Bhattacharyya et al., 1997). One of the proposed explanations is that foreign banks enter developing and developed countries for different reasons. In particular, foreign banks do not just follow their customers into developing markets, but seem genuinely interested in exploiting local opportunities (Clarke et al., 2001). We would like to contribute to the above literature by providing evidence on the efficiency of the Polish banking industry with the emphasis on the domestic versus foreign banks debate. To do so, we employ Data Envelopment Analysis and estimate cost, allocative, technical, pure technical and scale efficiency. Then, we perform a number of parametric and non-parametric tests to investigate whether domestic and foreign banks come from the same population. Finally, we analyze how ownership structure and different bank characteristics, such as capitalization, problem loans ratio, assets growth, size, and volatility of returns, influence our efficiency estimates. Our paper differs from the previous studies on transition economies in a few respects. First of all, our sample covers 95% of total banking assets, which makes it the most comprehensive database on the Polish banking system.2 Second, unlike other studies that consider foreign banks as a homogeneous group, we distinguish between greenfield banks, which have been set up as new entities, and takeover banks, which have resulted from the acquisition of formerly domestic institutions during the privatization process. We are also interested to test whether foreign banks tended to pick more cost-efficient institutions, and thus their higher efficiency would be inherited, rather than gained. Finally, following Berger et al. (2000), we take into account the home country of foreign banks in order to test the limited global advantage hypothesis. Our finding that foreign banks are more efficient than their domestic peers is consistent with the efficiency literature on transition economies. However, we also find that their higher efficiency is solely due to the better performance of greenfield banks. The evidence pertaining to takeover banks suggests that they acquired the more efficient institutions, but failed to enhance their efficiency further. Our findings imply that future studies should pay more attention to the differences between greenfield and takeover banks. The paper is structured in the following way. Section 2 describes the evolving role of foreign banks on the Polish banking market. In Section 3 we present a survey of the existing literature on the efficiency of banking industries in emerging markets. Section 4 explains the methodology used in the study, namely Data Envelopment Analysis. Section 5 presents the data and Section 6 provides empirical results of the investigation. Finally, Section 7 draws some conclusions.

In the present paper we have investigated the efficiency of Polish banks during the period 1997–2001. The preferred DEA methodology has allowed us to distinguish between five different types of efficiency, such as cost, allocative, technical, pure technical, and scale. Additionally, we have performed a number of parametric and non-parametric tests to test whether foreign and domestic banks came from the same population. Finally, we have employed multivariate regression analysis in order to detect the determinants of banking efficiency in Poland. We have found that the average efficiency has been 52.92% and 73.23% for domestic and foreign banks, respectively. Foreign banks have exhibited higher productivity of their inputs (technical efficiency) and have been superior in choosing the right mix of inputs in light of given prices (allocative efficiency). Furthermore, the tests have rejected the null hypothesis of common frontier for foreign and domestic banks. The efficiency of the banking system has not improved over the analyzed period. The years when most of the decline took place, 1999 and 2001, were marked by accelerating privatization and consolidation processes that imposed additional costs on banks. Additionally, the declining loan portfolio quality has added costs associated with monitoring and enforcement of loan contracts. Our findings that foreign banks exhibit higher efficiency than their domestic peers are consistent with other studies for transition and developing economies. However, the results of the multivariate regression analysis indicate that the higher efficiency of foreign banks has been due to the successful performance of greenfield banks. This could indicate that they have been better in managing their costs and screening borrowers. Alternatively, the findings might reflect a different mix of customers, with greenfield banks servicing multinational corporations and Polish blue-chip companies. Foreign banks that have acquired domestic banks do not appear to have enhanced their efficiency, which is an alarming sign, particularly in light of their acquisition of domestic banks with higher allocative efficiency. Our finding that Dutch banks have achieved higher efficiency than banks from other countries gives support to the hypothesis of the limited global advantage.