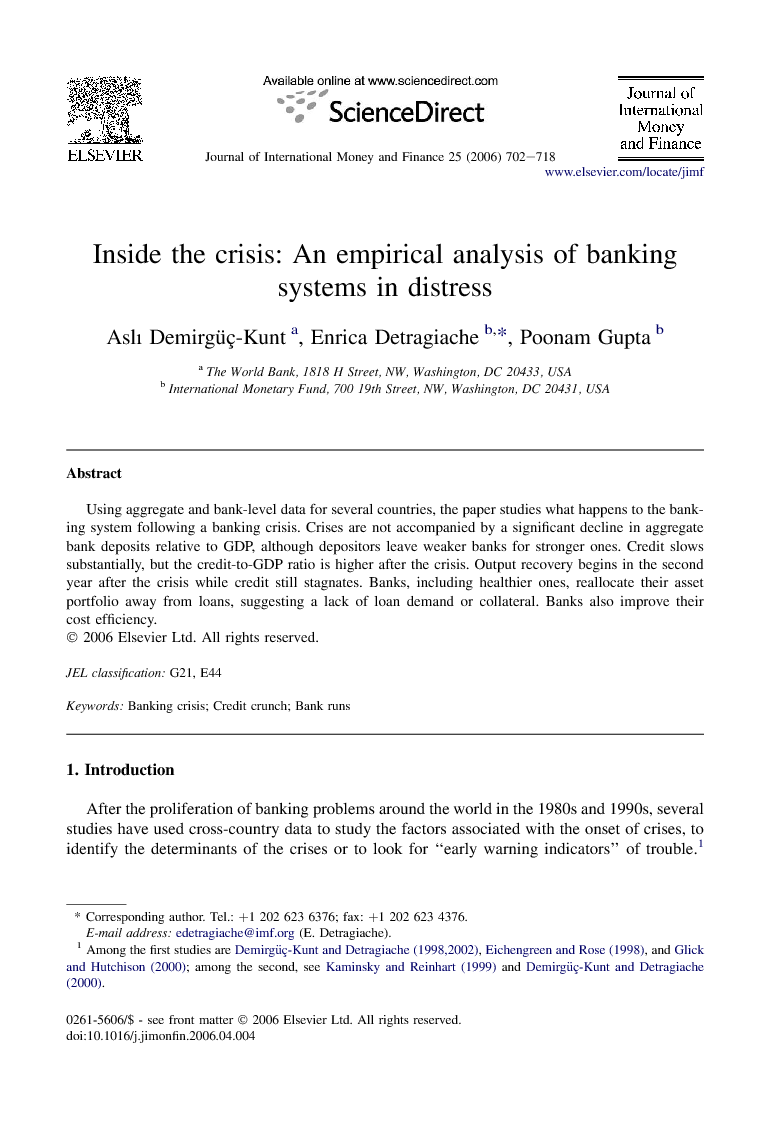 Using aggregate and bank-level data for several countries, the paper studies what happens to the banking system following a banking crisis. Crises are not accompanied by a significant decline in aggregate bank deposits relative to GDP, although depositors leave weaker banks for stronger ones. Credit slows substantially, but the credit-to-GDP ratio is higher after the crisis. Output recovery begins in the second year after the crisis while credit still stagnates. Banks, including healthier ones, reallocate their asset portfolio away from loans, suggesting a lack of loan demand or collateral. Banks also improve their cost efficiency.

After the proliferation of banking problems around the world in the 1980s and 1990s, several studies have used cross-country data to study the factors associated with the onset of crises, to identify the determinants of the crises or to look for “early warning indicators” of trouble.1 Less attention has been devoted to what happens to the economy and the banking sector after a banking crisis breaks out. 2 This paper attempts to fill this gap by studying the aftermath of banking crises using both aggregate and bank-level data. To identify the characteristics of the post-crisis period, we construct a cross-section of banking crises and test whether a number of banking and macroeconomic variables significantly change their behavior in the years following a crisis. Much of the theory of banking crises, inspired by the experience of the 1880s and early 1900s, assigns a central role to depositor runs. Runs may be self-fulfilling (Diamond and Dybvig, 1983), may be caused by incomplete information on the part of depositors (Chari and Jagannathan, 1988), or may originate in weak bank “fundamentals” (Allen and Gale, 1998). Vulnerability to depositor runs is also viewed as a basic characteristic of banks as financial intermediaries.3 However, systemic banking crises in which large segments of the banking system become financially distressed may occur even when depositors do not withdraw their deposits, if it is other bank creditors who “rush for the exit” or if banks simply become insolvent because of a deterioration in the quality of their assets. So the first question that we take up is whether banking crises are characterized by large declines in deposits. A second question is whether bank distress has contributed to propagate adverse economic shocks, thereby prolonging recessions. Bernanke (1983) argued that a contraction in credit brought about by banking problems was instrumental in the propagation of the Great Depression in the US. Mishkin (1996) warned of potential similar effect of banking crises in emerging markets.4 Identifying the effect of bank distress on economic activity, however, is notoriously difficult, because a decline in bank credit may reflect a lack of demand as much as problems on the supply side. In addition, the adverse shocks that accompany bank distress are often also plausible negative shocks to loan demand. Combining both aggregate and bank-level cross-country evidence, we will attempt to shed light on this complex issue. Bank-level evidence will also allow us to study how banks perform during a crisis: is there evidence of poor asset quality? Does the structure of assets and liabilities change? Do bank balance sheets contract? Can banks improve their operating efficiency following a crisis? The paper is organized as follows: Section 2 discusses sample selection and methodology. The evidence from the aggregate data is in Section 3. Section 4 discusses foreign exchange valuation effects, while Section 5 presents the analysis of bank-level data. Section 6 concludes.

Perhaps the most interesting empirical regularity uncovered in this study is that banking crises are not accompanied by substantial declines in bank deposits relative to GDP. Thus, while depositor runs have played a central role in the theoretical literature on banking crises, in practice they seem to be a sideshow at best. A possible explanation is that generous bank safety nets are present, and depositors have little to lose despite widespread insolvency in the banking system. However, our bank-level analysis indicates that deposits do decline in weaker, less profitable banks, suggesting that depositors are actively and accurately monitoring financial institutions. If funds withdrawn are redeposited in healthier banks, then the stability of aggregate deposits can be reconciled with the evidence of runs on weaker banks. This is an issue that deserves further study. For instance, if indeed large-scale reallocations of deposits occur following banking crises, how is the functioning of the financial system affected? Can the payment system, the interbank market, and the supply of credit continue to work smoothly? Bank financial distress, be it the result of illiquidity or insolvency, may help propagating adverse shocks to the real economy if it forces banks to curtail lending to creditworthy borrowers. Banking crises do not seem to be followed by prolonged recessions: the slowdown in output growth is usually sharp but short-lived, with growth rates back to their pre-crisis levels in the second year after the crisis even though credit growth remains depressed. An open question for future research is how do firms finance the recovery in the immediate aftermath of a banking crisis, and at what stage, if any, does the lack of bank credit become a hindrance to growth. The analysis of bank-level data indicates that even healthier banks, which did not experience significant declines in profitability or capital, reduce their loan-to-asset ratio following a crisis. This evidence in favor of the hypothesis that weak loan demand, rather than supply disruption, is the main cause of depressed credit growth following a banking crisis. From this perspective, policies to quickly (and sometimes indiscriminately) recapitalize weak banks so that they can start lending again may be misguided. Because banking crises are often accompanied by sharp adjustments in the exchange rate (Kaminsky and Reinhart, 1999), and in some countries bank deposits and loans are denominated in foreign currency, correcting for exchange rate valuation effects is potentially important to understanding the aftermath of a banking crisis. Another important result of our analysis is that these valuation effects, while they may be sizable for individual countries, do not significantly alter the overall picture. A last finding of our study is that banks, regardless of how severely distressed, seem to be able to improve their operational efficiency following a banking crisis. An interesting topic for future research would be to investigate how these cost reductions are achieved.