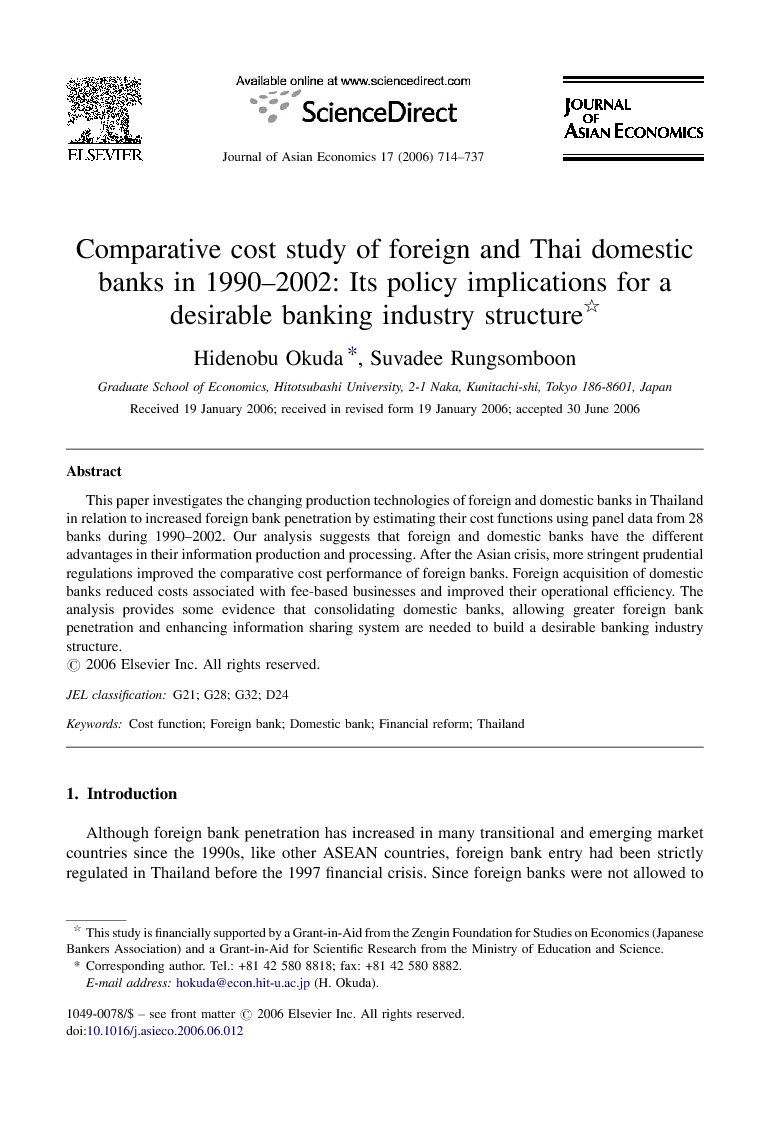 This paper investigates the changing production technologies of foreign and domestic banks in Thailand in relation to increased foreign bank penetration by estimating their cost functions using panel data from 28 banks during 1990–2002. Our analysis suggests that foreign and domestic banks have the different advantages in their information production and processing. After the Asian crisis, more stringent prudential regulations improved the comparative cost performance of foreign banks. Foreign acquisition of domestic banks reduced costs associated with fee-based businesses and improved their operational efficiency. The analysis provides some evidence that consolidating domestic banks, allowing greater foreign bank penetration and enhancing information sharing system are needed to build a desirable banking industry structure.

Although foreign bank penetration has increased in many transitional and emerging market countries since the 1990s, like other ASEAN countries, foreign bank entry had been strictly regulated in Thailand before the 1997 financial crisis. Since foreign banks were not allowed to possess a branch network, they concentrated on wholesale services focusing on mother countries’ companies. These restrictions were relaxed under the postcrisis financial reforms, and foreign bank penetration then increased substantially. Foreign ownership rose significantly in several large domestic banks, and some small domestic banks were acquired by foreign banks. Foreign banks have a strong influence not only on wholesale market customers but also those in retail markets. They eagerly entered the retail markets through participation in majority ownership of domestic banks. It is expected that financial deregulation will progress further under the WTO agreements, and the presence of foreign financial institutions will continue to rise. This movement is expected to be a significant catalyst for change in the domestic banking industry.1 The optimal structure of the banking industry and the regulatory constraints that would be conducive to such a structure are critically dependent on the technological characteristics of banking industry. In order to evaluate the impact of foreign penetration and to formulate the most appropriate policies to align foreign banks with the long-term goals within the Thai banking market, it is essential to investigate the differences in production technology between foreign and Thai domestic banks and the progressive changes resulting from an upturn in foreign penetration in recent years. In practice, the impacts of foreign bank penetration and the suitability of their banking policies have remained without scrutiny to date. Although the influence of foreign banks has been increasing in Thai banking markets since the 1990s, there have been few formal economic studies evaluating the comparative performance of foreign and domestic banks in Thailand. The few studies that the authors are aware of include Intarachote and Brown (2000), Leightner and Lovell (1998) and Okuda and Mieno (1999), who investigated the efficiency and productivity of foreign and Thai banks in terms of their progress in financial liberalization in the pre-Asian crisis period. Montgomery (2003) examined the role of foreign banks in post-crisis Asia countries, including Indonesia, Korea, Malaysia and Thailand, focusing particularly on the importance of the method of entry. However, there is no econometric analysis in his study. As far as the authors know, Chantapong (2003) is the only academic study investigating the comparative performance of foreign and domestic banks amid deepening foreign penetration after the Asian crisis. There has been no economic study investigating the production technology of foreign and Thai domestic banks relating to the overall development process of foreign entry before and after the Asian crisis. The purpose of this paper is to conduct a microeconomic examination of commercial banks in Thailand, focusing on technological features recognized to be vital in evaluating increased foreign participation in the banking market. While the financial services produced by banks cannot be measured directly, technological differences between foreign and domestic banks are reflected in the different cost performances between them. Based on this idea, by applying panel data from 28 commercial banks taken from the period 1990–2002, we estimate the cost functions of Thai domestic banks, foreign joint venture banks and foreign bank branches, paying attention to the impact of financial reform policies. In order to avoid ad hoc empirical analysis, we carefully categorize the group of banks and select the variables used in the estimated functions based on the framework of microeconomics. First and foremost, this paper will undertake a fact-finding to track business operations of Thai domestic and foreign banks from the 1990s up to 2002. Specifically, this paper focuses on the following four questions. First, did different information production technology used by foreign and Thai domestic banks impact on their cost performance? Second, if so, what was the nature of major differences in production technology between Thai domestic banks and foreign bank branches? Third, how did the production technology of domestic venture banks change by foreign majority acquisition that was accelerated by financial reforms following the Asian financial crisis? Fourth, how did the post-Asian crisis financial reform policies strengthening prudential regulations and modernization of the banking industry affect the performance of Thai domestic banks and foreign bank branches? Then, based on the technological characteristics of the banks identified, we will discuss the appropriateness of foreign bank entry policy in Thailand as well as its implications for future banking policies. This paper consists of seven sections. Section 2 briefly reviews related literatures and mentions the focuses of our study. Section 3 provides an overview of the development of foreign bank entry in the Thai banking market during the period 1990–2002. Section 4 presents the methodology of regression analysis of the commercial banks’ cost performance in Thailand focusing on the impact of foreign participation. Section 5 discusses the results of the regression analysis and Section 6 examines the robustness of our estimation. Finally, Section 7 summarizes the analysis and refers to the derived policy implications.