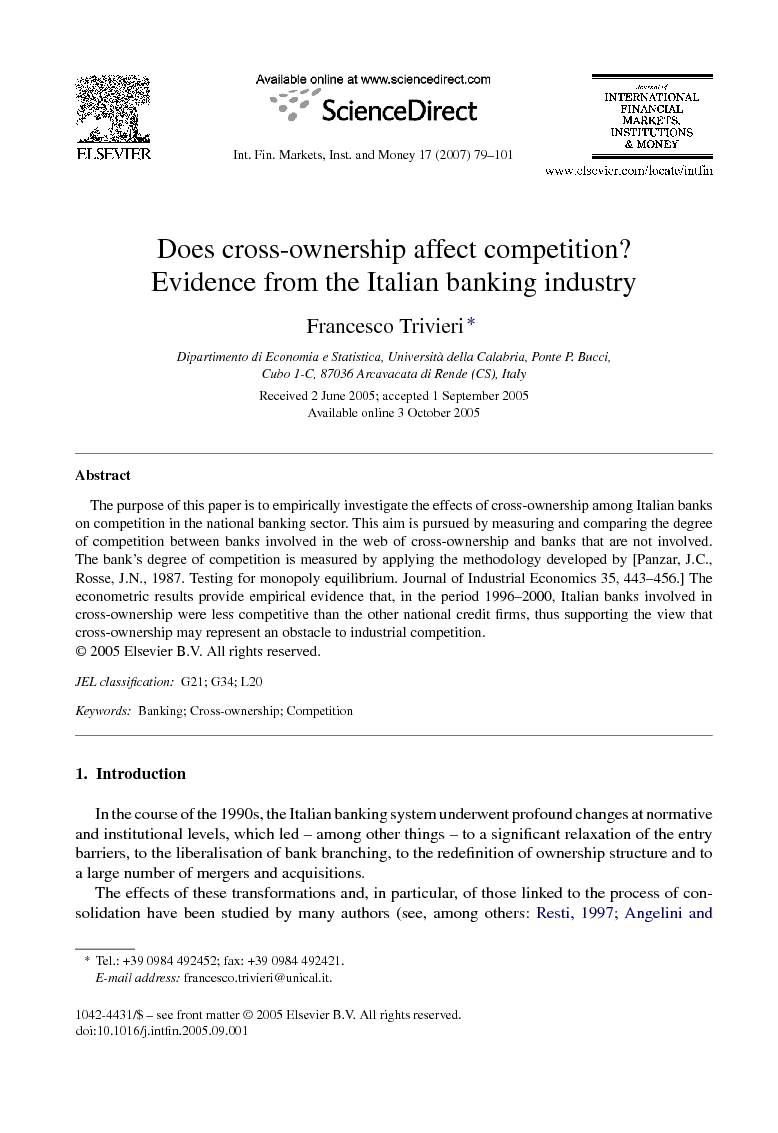 The purpose of this paper is to empirically investigate the effects of cross-ownership among Italian banks on competition in the national banking sector. This aim is pursued by measuring and comparing the degree of competition between banks involved in the web of cross-ownership and banks that are not involved. The bank's degree of competition is measured by applying the methodology developed by [Panzar, J.C., Rosse, J.N., 1987. Testing for monopoly equilibrium. Journal of Industrial Economics 35, 443–456.] The econometric results provide empirical evidence that, in the period 1996–2000, Italian banks involved in cross-ownership were less competitive than the other national credit firms, thus supporting the view that cross-ownership may represent an obstacle to industrial competition.

In the course of the 1990s, the Italian banking system underwent profound changes at normative and institutional levels, which led – among other things – to a significant relaxation of the entry barriers, to the liberalisation of bank branching, to the redefinition of ownership structure and to a large number of mergers and acquisitions. The effects of these transformations and, in particular, of those linked to the process of consolidation have been studied by many authors (see, among others: Resti, 1997, Angelini and Cetorelli, 2000, Messori, 2001, Sapienza, 2002, Focarelli et al., 2002 and Focarelli and Panetta, 2003). In spite of an increasing interest in the literature, works dedicated to studying the causes and effects of the reorganisation and consolidation processes in the Italian banking system have largely neglected to analyse an issue which is closely tied to such operations: the formation of a complex web of cross-ownership linking the large banking groups in the country, meaning by “cross-ownership” the shares held, directly or indirectly, by the same subjects in more groups. Generally speaking, the suspicion that cross-ownership among firms may have anticompetitive effects in an industrial sector finds support in the argumentations and in the theoretical results of several contributions in the industrial economics literature. Bruzzone (1999) observes that cross-ownership, in the same way as interlocking directorates, can favour exchanges of practical information which can become collusive strategies among firms. Also Gilo (2000) and Gilo and Spiegel (2003) show that cross-ownership may reduce competition, since they facilitate (tacit) collusion among firms. Maxwell et al. (1999) and O’Brien and Salop (2000) point out that, when major investors own shares in multiple firms in the same industry, cross-ownership changes competitive interest and moves the market equilibrium closer to the monopoly solution. Regardless of the implications on competition, the issue of cross-ownership among firms is of considerable interest for other reasons. First, cross-ownership can obstruct the contestability and, therefore, the efficient allocation of firms’ property rights (for a theory on the efficient allocation of firms’ property rights see Hart and Moore, 1990). Secondly, with reference to the Italian banking system, cross-ownership assumes major relevance if one considers that, in many cases, it can be traced down to the main banking foundations, strange beasts that – for several reasons – are unable to guarantee an effective corporate governance of banks (see Messori, 1998, Messori, 1999 and Messori, 2000). This paper deals with the issue of the effects of cross-ownership on competition. In particular, the aim of the work is to carry out an empirical investigation to assess whether, during the 1990s, cross-ownership among Italian banks had influence on competition in the national banking sector. At the present time, this type of analysis is completely missing in the literature concerning the banking industry in Italy. The purpose of this study is pursued by measuring and comparing the degree of competition between banks involved in cross-ownership and credit firms that are not involved. The analysis refers to the years 1996–2000, that is to the period in which cross-ownership became an important phenomenon in the Italian banking sector. The bank's degree of competition is measured by applying the methodology developed by Rosse and Panzar (1977) and Panzar and Rosse, 1982 and Panzar and Rosse, 1987 in the context of the so-called New Economic Industrial Organizations (NEIO). The paper is structured as follows. The next section presents a brief analysis dealing with the issue of cross-ownership in the Italian banking sector. The third section illustrates the strategy of Panzar and Rosse to measure the level of competition in an industry. The fourth section describes the data, the sample and the econometric methodology used in the empirical analysis. The fifth section presents and discusses the main results obtained and the sixth provides some final considerations.

The paper has pursued the aim to investigate empirically whether the web of cross-ownership among Italian banks, emerged in the course of the second half of the previous decade, has influenced competition in the national banking industry. The suspicion that cross-ownership may have negative effects on competition among firms belonging to an industrial sector finds support in the theoretical results of some contributions in the industrial economics literature. These studies show that cross-ownership can alter incentives for firms to compete and moves the market equilibrium closer to the monopoly solution, also when cross-ownership does not involve controlling positions (O’Brien and Salop, 2000, Maxwell et al., 1999, Gilo, 2000 and Gilo and Spiegel, 2003). The purpose of this paper to obtain indications about the effects of banking cross-ownership on competition has been pursued by measuring and comparing the degree of competition between Italian banks involved in cross-ownership and national banks that are not involved. A measure of banking competition has been obtained by estimating the so-called H statistic developed by Rosse and Panzar (1977) and Panzar and Rosse, 1982 and Panzar and Rosse, 1987. The results of the econometric analysis, carried out by using an unbalanced panel of 503 banks for the period 1996–2000, lead to two main conclusions. The first is that, in the 5 year period under consideration, Italian banks taken as a whole operated under conditions of monopolistic competition. This result is consistent with those obtained in other contributions that – albeit with different aims and time frames – have estimated the Panzar and Rosse's statistic for the Italian banking industry. Secondly, the results obtained from the econometric investigation provide empirical evidence that, during the second half of the 1990s (that is to say the period in which cross-ownership became a relevant fact in the Italian banking sector), the Italian banks linked by cross-ownership behaved less competitively than credit firms not involved in the same phenomenon. In particular, this second conclusion emerges quite clearly when a particular category of cooperative banks, the BCC, are excluded from the analysis. Since BCC may be viewed as non-profit banks, it is plausible to reckon that they may have a different competitive behaviour with respect to the other categories of the Italian credit firms, that is corporations and Popolari. The exclusion of BCC allows us to investigate the possible effects of cross-ownership on competition by considering banks which may be considered similar in their competitive strategies. To summarize, the empirical evidence found in this paper appears to corroborate the results of the studies which have shown that cross-ownership may represent an obstacle to competition among firms in an industry. With specific reference to the Italian banking system, the results obtained seem to lend support to the claim that cross-ownership between Italian banking groups may constitute a serious threat to competition in the national credit sector. Therefore, on the policy level it makes sense to share the view of some authors (Messori, 1999 and Inzerillo and Messori, 2000, for example) who claim the need to take initiatives aimed at dismembering the maze of cross-ownership in the Italian banking system, thus promoting a more competitive relationship between the players in the industry and improving the outcome of the restructuring process that the Italian banking sector is still undergoing.