عنوان انگلیسی
Finance and growth in the EU: New evidence from the harmonisation of the banking industry
دانلود فوری مقاله + سفارش ترجمه 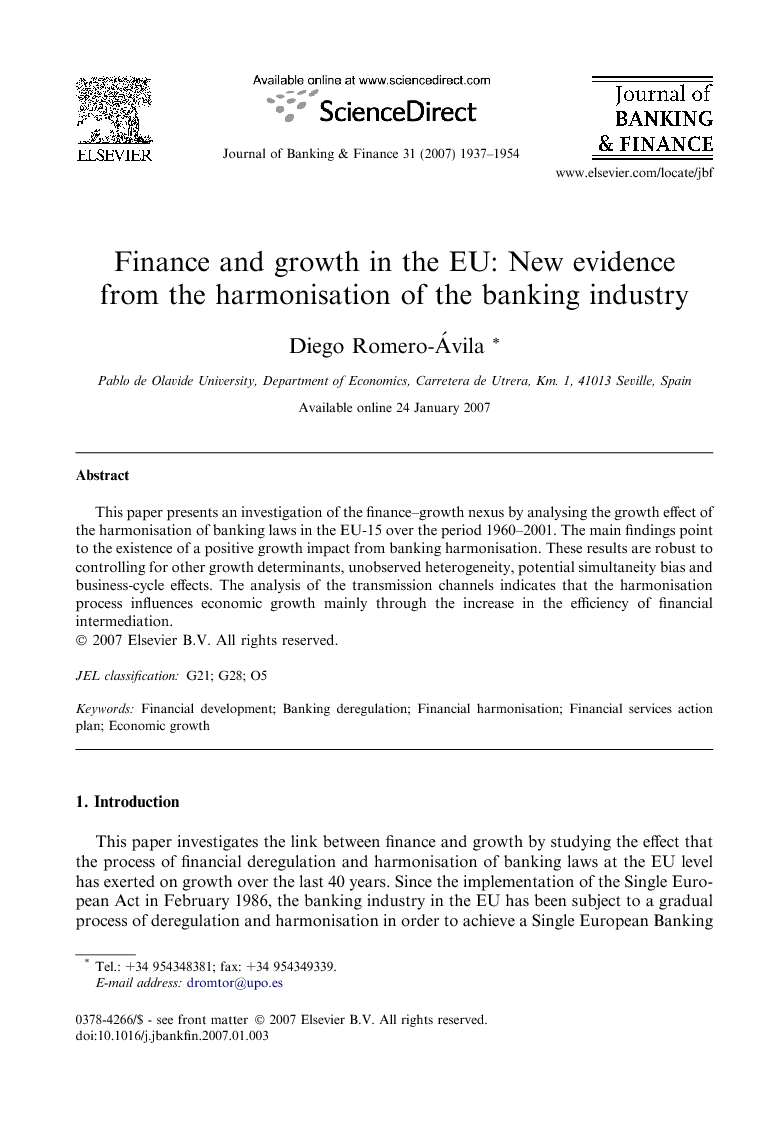 This paper presents an investigation of the finance–growth nexus by analysing the growth effect of the harmonisation of banking laws in the EU-15 over the period 1960–2001. The main findings point to the existence of a positive growth impact from banking harmonisation. These results are robust to controlling for other growth determinants, unobserved heterogeneity, potential simultaneity bias and business-cycle effects. The analysis of the transmission channels indicates that the harmonisation process influences economic growth mainly through the increase in the efficiency of financial intermediation.

This paper investigates the link between finance and growth by studying the effect that the process of financial deregulation and harmonisation of banking laws at the EU level has exerted on growth over the last 40 years. Since the implementation of the Single European Act in February 1986, the banking industry in the EU has been subject to a gradual process of deregulation and harmonisation in order to achieve a Single European Banking Market. This has opened domestic banking sectors and created more cross-border activity as well as greater competition, with the aim of achieving a more efficient banking sector across Europe. The finance–growth nexus has received a great deal of attention over the past decades. Both theory and empirical evidence support the existence of a positive link between economic growth and financial development.1 On the basis of the methodology employed, we can distinguish three main groups of studies. A first group based on cross-section regressions includes inter alia King and Levine (1993) that focus on banking sector development and Levine and Zervos (1998) that stress the role of stock markets in promoting growth. Despite providing strong evidence of a positive correlation between finance and growth, these studies fail to shed any light on causality issues. To overcome this difficulty, researchers shifted to instrumental variables methods, normally within a panel data framework. La Porta et al. (1998) show that legal factors may explain observed differences in the degree of development and composition of financial systems across countries. Using data on creditor protection and accounting standards, degree of law enforcement and legal origin, Levine, 1998 and Beck et al., 2000 find that the exogenous component of financial intermediary development is positively related to growth. Using panel GMM instrumental variables estimation methods, Rousseau and Wachtel, 2000 and Beck and Levine, 2004 find that both stock markets and banks positively influence economic growth. A third group of studies focuses on specific mechanisms through which financial policies may affect growth. Rajan and Zingales (1998) examine whether industries that are more reliant on external finance experience higher growth in those countries with more developed financial systems. Levine (2001) shows that the lifting of restrictions on foreign-bank entry spurs growth through improvements in productivity levels. In another event-study investigation, Jayaratne and Strahan (1996) provide evidence that intrastate branch reform in the United States positively affects growth by raising bank lending quality. Furthermore, the literature has not come to clear conclusions on the transmission channels through which finance influences growth. While Goldsmith, 1969, De Gregorio and Guidotti, 1995 and Greenwood and Jovanovic, 1990 stress the efficiency channel, McKinnon, 1973, Shaw, 1973 and Bencivenga and Smith, 1991 emphasise the investment channel. The institutional changes considered here may constitute an ideal scenario to analyse the finance–growth nexus and an opportunity to shed some light on the supply-leading hypothesis. Since EU member states are compelled to harmonise their banking sectors through the adoption of banking Directives that have the character of binding laws, it is arguable that any significant statistical link between banking harmonisation and growth may not merely reflect a contemporaneous correlation, but a causal relation. To measure the process of banking deregulation and harmonisation in the EU, we assemble a data set consisting of the implementation dates of the main EU Directives affecting the financial services industry. The results suggest that banking harmonisation has raised output growth through the improvement in the efficiency of financial intermediation. The rest of the paper is organised as follows. Section 2 describes the institutional background behind the EU banking deregulation and harmonisation process, which serves as the basis for the computation of the harmonisation index presented in Section 3. Section 4 reports the estimates of the growth impact of banking harmonisation. Section 5 provides tentative evidence on the channels through which banking harmonisation influences growth and Section 6 concludes.

This paper has provided strong evidence that the process of financial deregulation and harmonisation of banking laws at the EU level has raised output growth over the past decades through the improvement in the efficiency of financial intermediation. These results are robust to controlling for other growth determinants, potential simultaneity bias and business-cycle effects. Estimates of the growth effect indicate that the implementation of Directives equivalent to 10 points has raised growth by at least one percentage point, which is equivalent to 35% of the unconditional mean of per capita output growth experienced in the EU over the period 1960–2001. Overall, the positive benefits from financial harmonisation accord well with the expectations by the national and EU authorities who envisaged the need to couple the liberalisation of interest rates and the removal of capital controls and entry restrictions with the strengthening of prudential, supervisory and accounting standards. The creation of a Single European Banking Market has opened domestic banking sectors, created more cross-border activity and in turn more competition, which have all led to increased efficiency in the allocation of resources to productive use by decreasing the cost of capital. This has facilitated the process of real convergence observed across EU member states over the past decades. Nonetheless, the EU authorities have been cautiously optimistic over the last years and have put forward more initiatives through the Financial Services Action Plan of 1999 with the aim of stepping up the process of financial integration in Europe. Along these lines, an important recent development has been the adoption of the Takeover Directive with the aim of facilitating the process of cross-border consolidation, which may be a necessary step for credit institutions to enjoy economies of scale at the EU level.