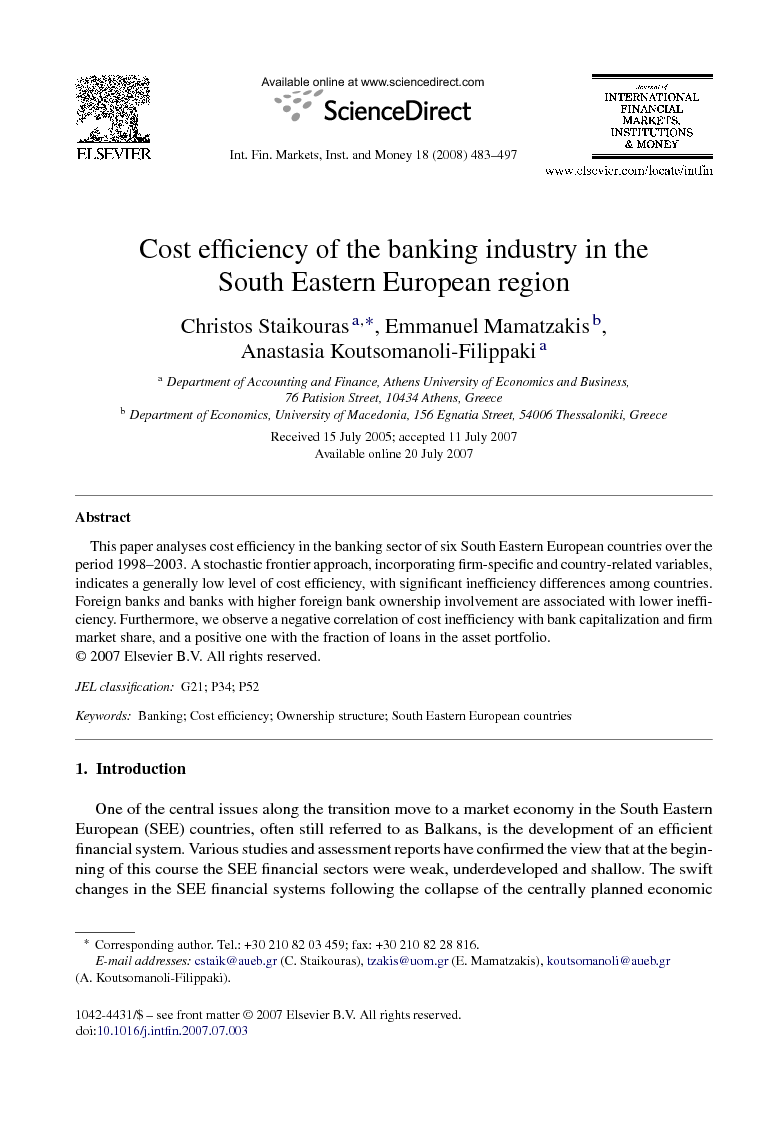 This paper analyses cost efficiency in the banking sector of six South Eastern European countries over the period 1998–2003. A stochastic frontier approach, incorporating firm-specific and country-related variables, indicates a generally low level of cost efficiency, with significant inefficiency differences among countries. Foreign banks and banks with higher foreign bank ownership involvement are associated with lower inefficiency. Furthermore, we observe a negative correlation of cost inefficiency with bank capitalization and firm market share, and a positive one with the fraction of loans in the asset portfolio.

One of the central issues along the transition move to a market economy in the South Eastern European (SEE) countries, often still referred to as Balkans, is the development of an efficient financial system. Various studies and assessment reports have confirmed the view that at the beginning of this course the SEE financial sectors were weak, underdeveloped and shallow. The swift changes in the SEE financial systems following the collapse of the centrally planned economic systems, their subsequent attempts to catch up with the European Union, and the pivotal role of the SEE banking sector in shaping economic developments and even triggering changes at important junctures, make the banking systems in these countries a distinct field of research. Overall, the investigation of bank efficiency has fueled a large body of literature globally, and is of vital importance from both a microeconomic and a macroeconomic point of view (Berger and Mester, 1997). From the micro-perspective, the issue of banking efficiency is crucial, especially for the SEE economies, given the enhancement of competition due to the strong, and increasing, presence of foreign banks in the region – both as greenfield and takeover investments – and the improvement in the institutional, regulatory and supervisory framework. From the macro-perspective, the efficiency of the banking industry influences the cost of financial intermediation and the overall stability of financial systems, as banks constitute the spinal cord of financial markets in the SEE region (European Commission, 2004). Indeed, an improvement of banking performance indicates a better allocation of financial resources, and therefore an increase of investment that favors growth (Weill, 2003). This paper aims at evaluating cost efficiency in the banking sectors of six SEE countries (Bosnia-Herzegovina, Bulgaria, Croatia, FYR of Macedonia, Romania, and Serbia–Montenegro) over the period 1998–2003. Cost efficiency literature is growing very fast, but the vast majority of studies cover the US and other developed countries (Berger and Humphrey, 1997). Studies that measure banking efficiency in transition countries lag far behind (see Appendix A). To the best of our knowledge, despite the dominant role banks have in the SEE economies, this is the first study on cost efficiency investigating the whole SEE region. Thus, we provide new elements on the gap in cost efficiency among SEE countries, and between banks of different firm size and ownership structure to assess differences in managerial performance. To do so, we estimate banks’ cost efficiency using the stochastic frontier approach, incorporating both firm-specific and country-related variables. At a second stage, we look at the factors that may be correlated with firm's efficiency. The rest of the paper proceeds as follows. Section 2 presents some stylized facts about the SEE banking systems. Section 3 briefly describes the methodology, while Section 4 provides the description of the data. Section 5 develops the empirical results, while Section 6 summarizes and concludes.

The paper analyses cost efficiency in the banking sector of six South Eastern European countries over the period 1998–2003. Not surprisingly, our findings, based on the stochastic frontier approach, show a generally low level of cost efficiency, with significant inefficiency differences across countries. Moreover, medium-sized banks with some type of foreign ownership are the most cost efficient credit institutions. Furthermore, a second-stage regression analysis shows that underperforming banks tend to be undercapitalized, have a small market share and a higher fraction of loans in their balance sheet. Overall, our results suggest that policy makers in SEE countries can draw some lessons from our conclusions and promote cost efficiency by enhancing their efforts to reform the regulatory and supervisory framework, to complete the transition from state-owned banking systems to largely private sectors, and to support market-led consolidation of smaller banks. At the same time, banking markets should remain open and contestable, encouraging the entry of foreign banks.