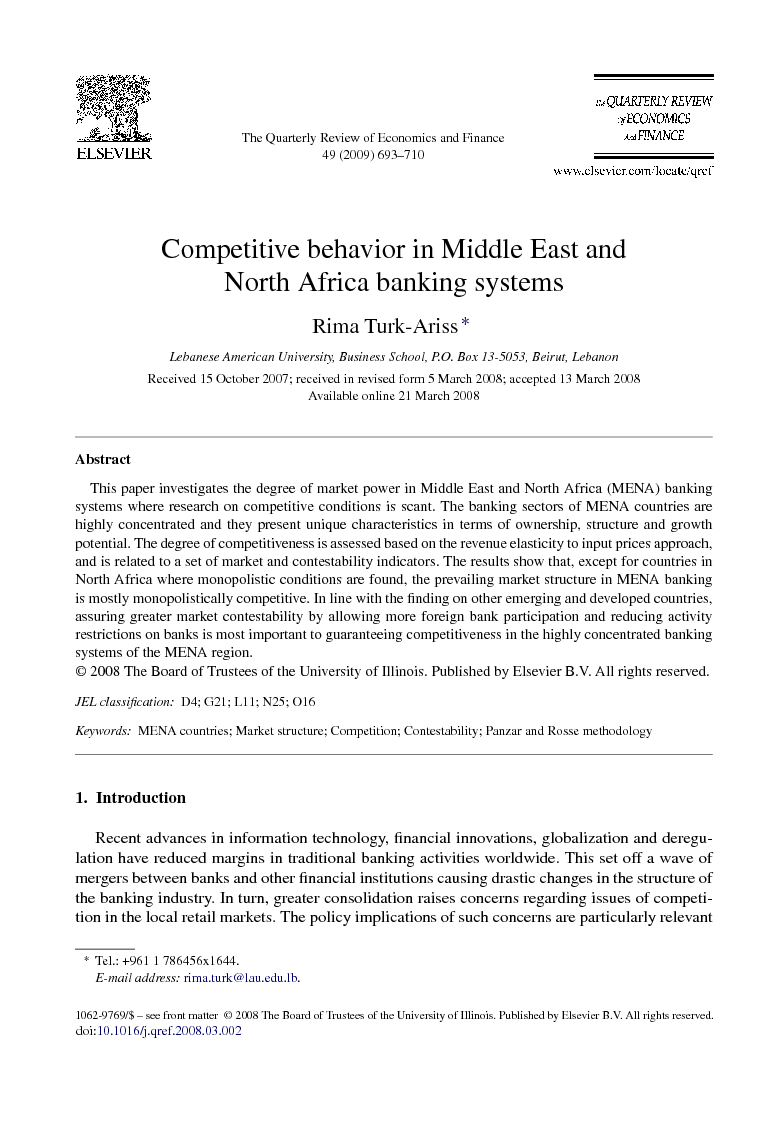 This paper investigates the degree of market power in Middle East and North Africa (MENA) banking systems where research on competitive conditions is scant. The banking sectors of MENA countries are highly concentrated and they present unique characteristics in terms of ownership, structure and growth potential. The degree of competitiveness is assessed based on the revenue elasticity to input prices approach, and is related to a set of market and contestability indicators. The results show that, except for countries in North Africa where monopolistic conditions are found, the prevailing market structure in MENA banking is mostly monopolistically competitive. In line with the finding on other emerging and developed countries, assuring greater market contestability by allowing more foreign bank participation and reducing activity restrictions on banks is most important to guaranteeing competitiveness in the highly concentrated banking systems of the MENA region.

This paper examines competitive structures in 12 highly concentrated MENA banking sectors over the period 2000–2006 and investigates factors that can explain differences in the degree of competitiveness. The PR methodology is used to account for the competitive nature of banking and the estimated measure of competition, the H-statistic, is related to a number of industry controls and prevailing banking structures. To my knowledge, no econometric analysis of the degree of competitiveness in MENA banking was conducted before. The results show that, except for countries of North Africa where monopolistic conditions cannot be ruled out, the market structure in MENA banking systems can best be described as monopolistically competitive. While concentration levels have historically been high in banking in the region, there is cross-country evidence that MENA banking markets are contestable. Foreign competition (or the threat thereof) moderates any eventual decline in competition resulting from consolidation. Fewer activity restrictions – reflected in more open banking systems with few restrictions on entry and branching – add to the competitive pressures in banking. This suggests that assuring greater market contestability by allowing more foreign bank participation and reducing activity restriction on banks is most important to guaranteeing competitiveness in MENA banking systems. Most MENA countries are committed to financial liberalization. Banks are increasingly required to adopt international accounting standards and prudential guidelines of capitalization and governance, while foreign banks are encouraged to become active players in domestic markets. The results convey an important message to regulators concerned with the traditional high concentration levels observed in MENA banking sectors. Specifically, the analysis lends support to policy decisions to develop contestable markets to assure competitiveness in banking.