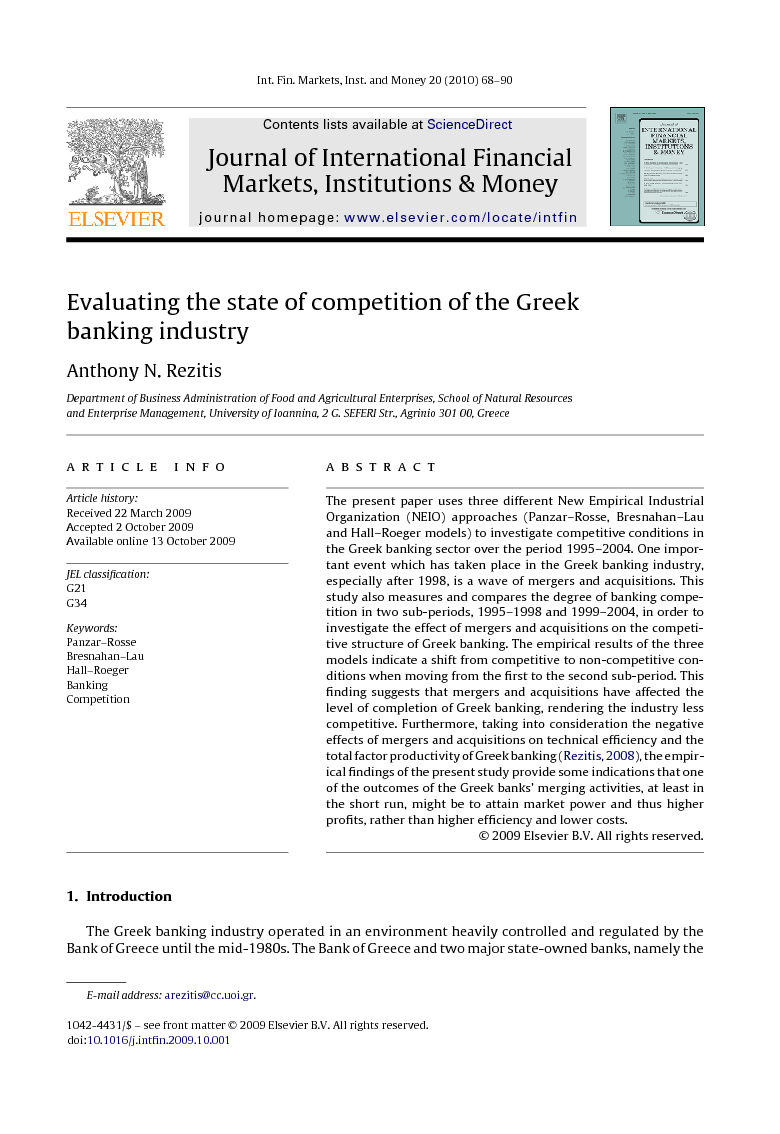 The present paper uses three different NEIO approaches (the Panzar–Rosse, Bresnahan–Lau, and Hall–Roeger models) to assess competitive conditions in the Greek banking sector over the period 1995–2004. Two important events took place in the Greek banking industry during the period under consideration. The first was the continuously decreasing market share of the state-controlled banks and the second was the wave of mergers and acquisitions which occurred especially after 1998. The present study also measures and compares the degree of banking competition between the two sub-periods, i.e. 1995–1998 and 1999–2004, in order to investigate the effect of mergers and acquisitions on the competitive structure of Greek banking. The empirical results of the Panzar–Rosse model indicate that during the whole period (1995–2004) the Greek banks appeared to operate in conditions of perfect competition. When the two sub-periods (1995–1998 and 1999–2004) are considered, the empirical results suggest that Greek banks operated in conditions of perfect competition in the first sub-period (1995–1998) and in conditions of monopolistic completion in the second sub-period (1999–2004). The results of the Bresnahan–Lau and the Hall–Roeger approaches suggest the presence of a non-competitive market structure in the Greek banking industry for the whole time period and a shift from a competitive to a non-competitive market structure from the first to the second sub-period. A possible explanation of the differences in the empirical results obtained in terms of the whole time period between the Panzar–Rosse model and the other two models, is that in the case of the Panzar–Rosse model the competitive conditions of the first sub-period might prevail while the opposite happens in the case of the other two models, i.e. the non-competitive conditions of the second sub-period could dominate. The empirical results of the three models, however, are similar when the two sub-periods are considered and suggest a shift from competitive to non-competitive conditions when moving from the first to the second sub-period. This finding is important in understanding the evolution and development of the market structure of Greek banking when mergers and acquisitions were underway, especially after 1998. In other words, mergers and acquisitions have affected the level of completion of Greek banking, rendering the industry less competitive. Furthermore, taking into consideration the negative effects of mergers and acquisitions on the technical efficiency and total factor productivity of Greek banking (Rezitis, 2008), the empirical findings of the present study supports the SPC paradigm, providing some indications that some of the main aims behind the merging activities of Greek banks, at least in the short run, might be to achieve market power and thus higher profits rather than higher efficiency and lower costs. These findings are particularly important to policymakers, especially under the current financial crisis, in which among governmental actions taken to halt and reverse the current financial distress is the financial support of the banking sector.