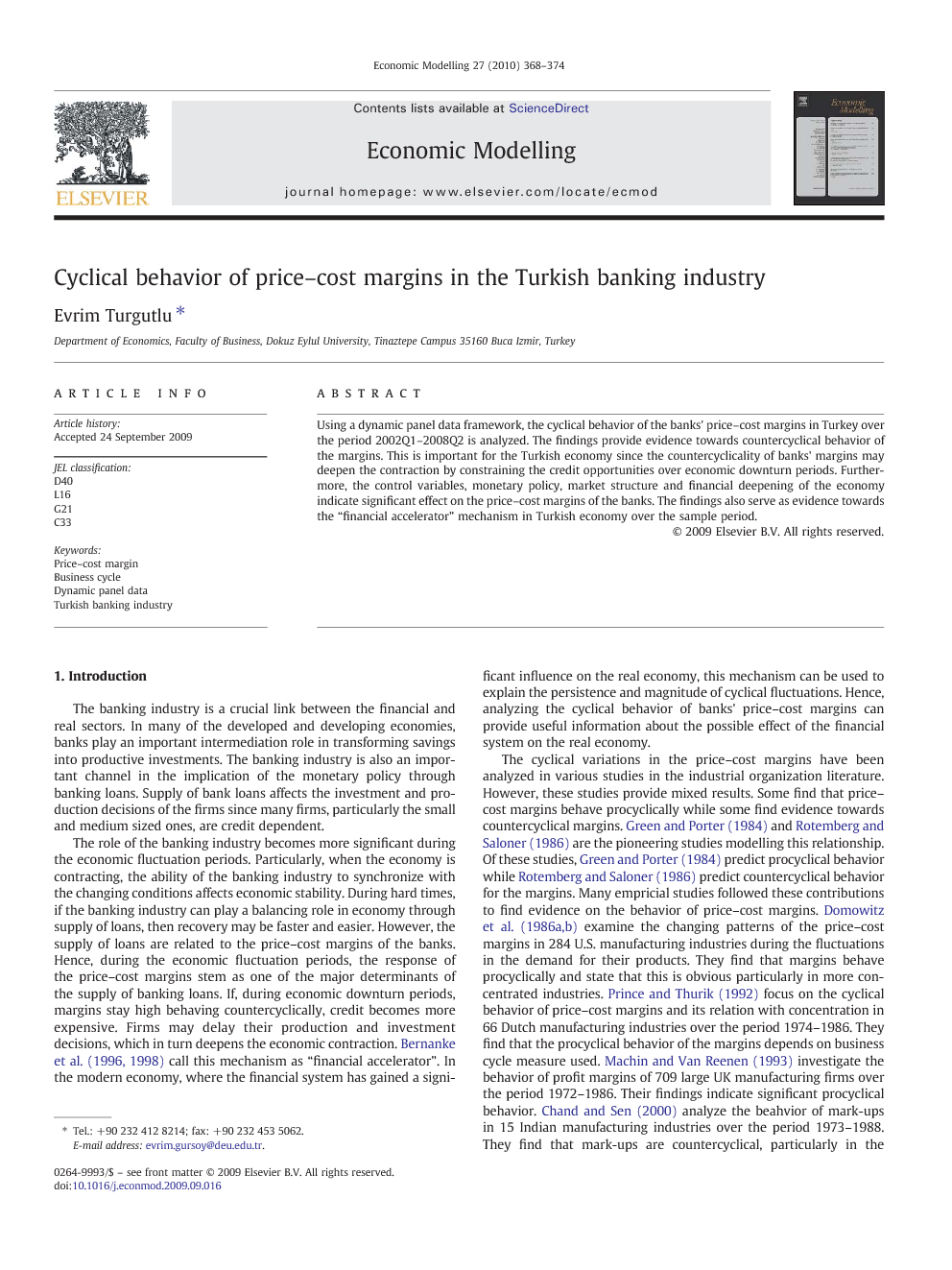 Using a dynamic panel data framework, the cyclical behavior of the banks' price–cost margins in Turkey over the period 2002Q1–2008Q2 is analyzed. The findings provide evidence towards countercyclical behavior of the margins. This is important for the Turkish economy since the countercyclicality of banks' margins may deepen the contraction by constraining the credit opportunities over economic downturn periods. Furthermore, the control variables, monetary policy, market structure and financial deepening of the economy indicate significant effect on the price–cost margins of the banks. The findings also serve as evidence towards the “financial accelerator” mechanism in Turkish economy over the sample period.

The behavior of banks' price–cost margins during the economic fluctuation periods is an important issue for an economy seeking macroeconomic stability and development. Turkey, as a developing economy, is mostly dependent on the banking industry as a channel providing funds for firms. The countercylclical behavior of the margins may lead to scarcity of the funds during the economic downturns and deepen the contraction, while the procyclical behavior may help the recovery of the economy. In this study, three different definitions of price–cost margins and three business cycle indicators, real total loans, real GDP and real GDP per capita, are used. Following Aliaga-Diaz and Olivero (2006), total loans are particularly preferred as a business cycle indicator since they may reflect the investment and production behavior of the firms closer than the GDP. We also controlled for various transmission channels of economic fluctuations towards the price–cost margins of the banks. To this end, monetary policy indicator, Treasury Bill rate, market structure indicator Herfindahl–Hirschman index, financial deepening of the economy, and share of the biggest banks in the Turkish banking industry are used. Moreover, seasonal dummies, a dummy to control for the regulation in November 2005, the new banking law and a dummy representing the existence of state-owned banksa are included in the model. We used a dynamic panel data approach and followed the Arellano and Bond (1991) procedure. To the author's best knowledge, this is the first study that examines the cyclical behavior of the banks' price–cost margins in Turkey. The findings of this study may contribute to the relevant literature as evidence for a developing country and may serve as a model for similar economies. The results indicate that, for most of the price–cost margin measures and business cycle definitions, the price–cost margins of the Turkish banks behave countercylically with the economic fluctuations over the sample period, 2002Q1:2008Q2. This finding also conforms with the “financial accelaretor” concept developed by Bernanke et al., 1996 and Bernanke et al., 1998. The policy makers should consider this possible reaction of the banks' margins and should implement policies to offset the deepening effect of this countercyclical behavior and ensure macroeconomic stability. When the control variables are considered, monetary policy, market structure and financial deepening of the economy indicate a significant effect on the price–cost margins. The remaining variables do not seem to have an important effect in the transmission channel of economic fluctuations into the banks' margins. Overall, this study indicates the importance of the behavior of Turkish banks during economic fluctuations. Since we found greater evidence on the countercyclical behavior of the margins, the role of the banks become more critical for the economic recovery after contractionary periods. However, the banking industry has the largest share in the Turkish financial sector. To overcome the disadvantages of the countercyclical behavior of the banks' margins, the financial instruments should be differentiated further and their use should be encouraged by the authorities. In this way, the macroeconomic stability and economic recovery may be achieved in a less dependent way on the banking industry. The results of this study may hopefully present an idea on the behavior of the price–cost margins of the banks in the similar developing economies over the fluctuation periods. A future study comprising a cross-country analysis may provide a broader idea on the behavior of the margins in the developing economies.