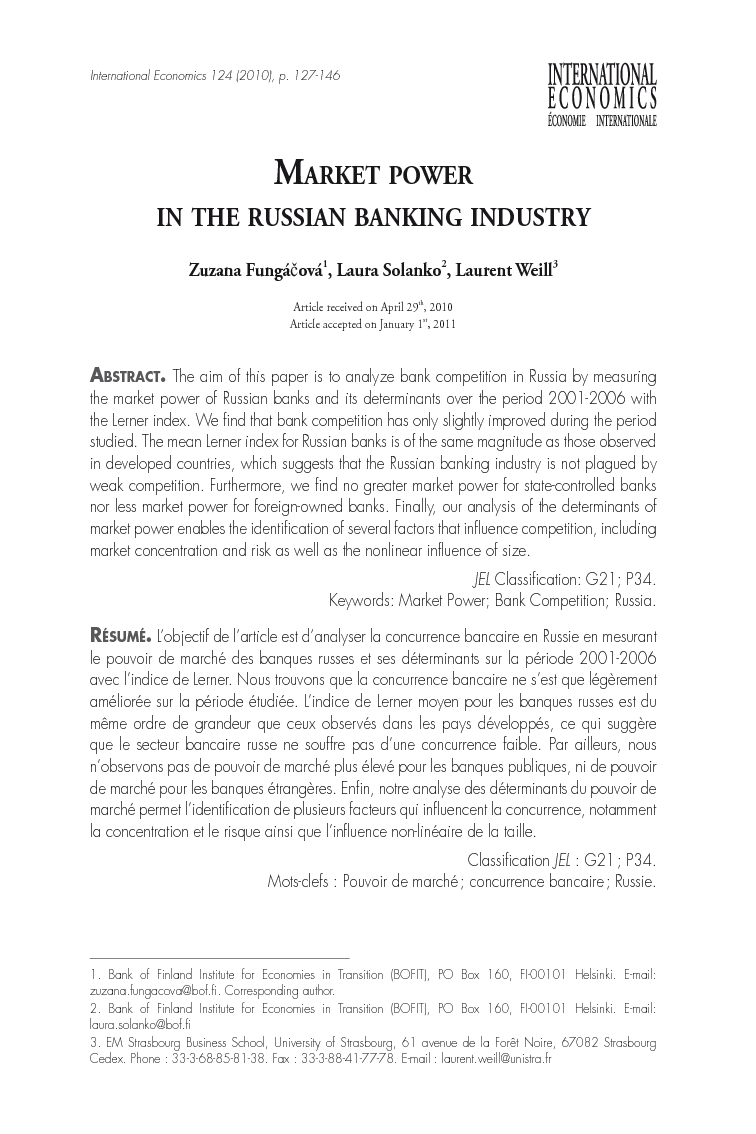 The aim of this paper is to analyze bank competition in Russia by measuring the market power of Russian banks and its determinants over the period 2001-2006 with the Lerner index. We find that bank competition has only slightly improved during the period studied. The mean Lerner index for Russian banks is of the same magnitude as those observed in developed countries, which suggests that the Russian banking industry is not plagued by weak competition. Furthermore, we find no greater market power for state-controlled banks nor less market power for foreign-owned banks. Finally, our analysis of the determinants of market power enables the identification of several factors that influence competition, including market concentration and risk as well as the nonlinear influence of size.

In the wake of major structural changes in banking industries around the globe, the impact of bank competition on economic growth has generated increasing interest in the literature of recent years. Since banks play a key role in the financing of the economy, changes in bank competition are supposed to exert an impact on access to bank finance in the form of lower loan rates or relaxing of financing constraints (Cetorelli and Gambera, 2001; Carbo-Valverde, Rodriguez-Fernandez and Udell, 2009). Such developments would suggest a positive impact of bank competition on economic growth (Claessens and Laeven, 2005). Bank competition is even more important for economic growth in emerging countries. First, these countries are characterized by low ratios of credit to GDP, which may be a result of the financing obstacles created by subdued banking competition. Second, bank lending is the leading source of external finance in these countries, owing notably to underdeveloped capital markets. In spite of this, earlier studies investigating the level and the determinants of bank competition focus instead on developed countries (e.g. Fernandez de Guevara, Maudos and Perez, 2005). Russia is a very interesting example of such an emerging market. Bank lending is stunningly low, with a ratio of domestic credit to GDP of 25.7% in 2005, compared with a world average of 55.8% (EBRD, 2006). At the same time, bank lending represents the largest source of external finance for companies.4 This picture has not changed despite impressive economic and banking-sector growth in recent years, including a doubling of the ratio of banking sector assets to GDP. Our aim in this paper is to analyze bank competition in Russia in the recent years by measuring the market power of Russian banks over the period 2001-2006. We utilize a rich panel dataset from the financial information agency Interfax and the Central Bank of Russia, which provides quarterly data for all Russian banks. In line with recent studies on bank competition (Fernandez de Guevara, Maudos and Perez, 2005; Solis and Maudos, 2008; Berger, Klapper and Turk-Ariss, 2009; Carbo-Valverde et al., 2009), bank competition is measured by the Lerner index. This measure of market power directly infers a bank's conduct and then informs on the actual behavior of the bank. First, we measure the level and the evolution of the market power of Russian banks during the period of study. We assess the level of market power of banks in Russia and compare it with other countries. We also investigate whether strong economic growth influenced banking competition in recent years. Second, we investigate whether market power depends on ownership. Russian banking is characterized by the coexistence of three different types of banks: state-controlled banks, domestic private banks, foreign-owned banks. We analyze whether the privatization of state-controlled banks or relaxing of foreign bank entry contribute to reducing market power in the Russian banking industry. Third, we analyze the determinants of market power for Russian banks. This is done to provide relevant insights for economic policy, by identifying factors which can be influenced so as to enhance bank competition. Furthermore, this analysis allows us to examine the extent to which these determinants are similar to those observed in other countries. Indeed, earlier studies on determinants of banks' market power have all looked at developed countries (Fernandez de Guevara, Maudos and Perez, 2005; Fernandez de Guevara and Maudos, 2007). Therefore, this identification of the determinants of banks' market power is a significant contribution to the analysis of bank competition in emerging countries. The rest of the article is structured as follows. Section 2 describes the Russian banking industry. Section 3 sets out the methodology and data. Section 4 presents the results, and Section 5 concludes.

This paper analyses bank competition in Russia during the period 2001-2006. Our findings can be summarized as follows. First, bank competition only slightly improved between 2001 and 2006. Nevertheless, the level of bank competition is very similar to that observed in the developed countries. Russian banking industry does not seem to suffer from excessive market power of banks. Second, no category of banks among domestic private banks, state-controlled banks, and foreign-owned banks, has been persistently more or less competitive than the others. We observe enhanced market power for foreign-owned banks and reduced market power for state-controlled banks over the period, leading to the finding that the most competitive banks were foreign-owned banks at the beginning of the period, and state-owned banks at the end of the period. Third, our investigation of the determinants of market power identifies the roles of concentration and risk, the absence of impact of ownership, and the nonlinear influence of size, among others things. In a nutshell, our findings qualify the need for procompetitive policy in the Russian banking industry. Indeed, Russia does not suffer from particularly weak bank competition. Furthermore, the standard policies for promoting competition do not find support here. Namely, the relaxed entry of foreign banks and the privatization of state-owned banks would not likely lead to greater competition. Moreover, the prohibition of mergers to limit bank size may also not favour competition, as the relationship between size and market power is an inverse U-curve. This conclusion should be related to the finding from Fungáčová and Weill (2009) that greater bank competition enhances the occurrence of bank failures. Indeed, when considering together this possible danger of enhancing bank competition in a country plagued by financial instability and our findings on the fairly normal level of bank competition in Russia and the difficulties of designing a procompetitive policy, one can reasonably wonder whether bank competition should be promoted in this country. Nevertheless, this study is only the first one to investigate bank competition in Russia, and further analysis is needed to confirm our conclusions.