عنوان انگلیسی
Back to the basics in banking? A micro-analysis of banking system stability
دانلود فوری مقاله + سفارش ترجمه 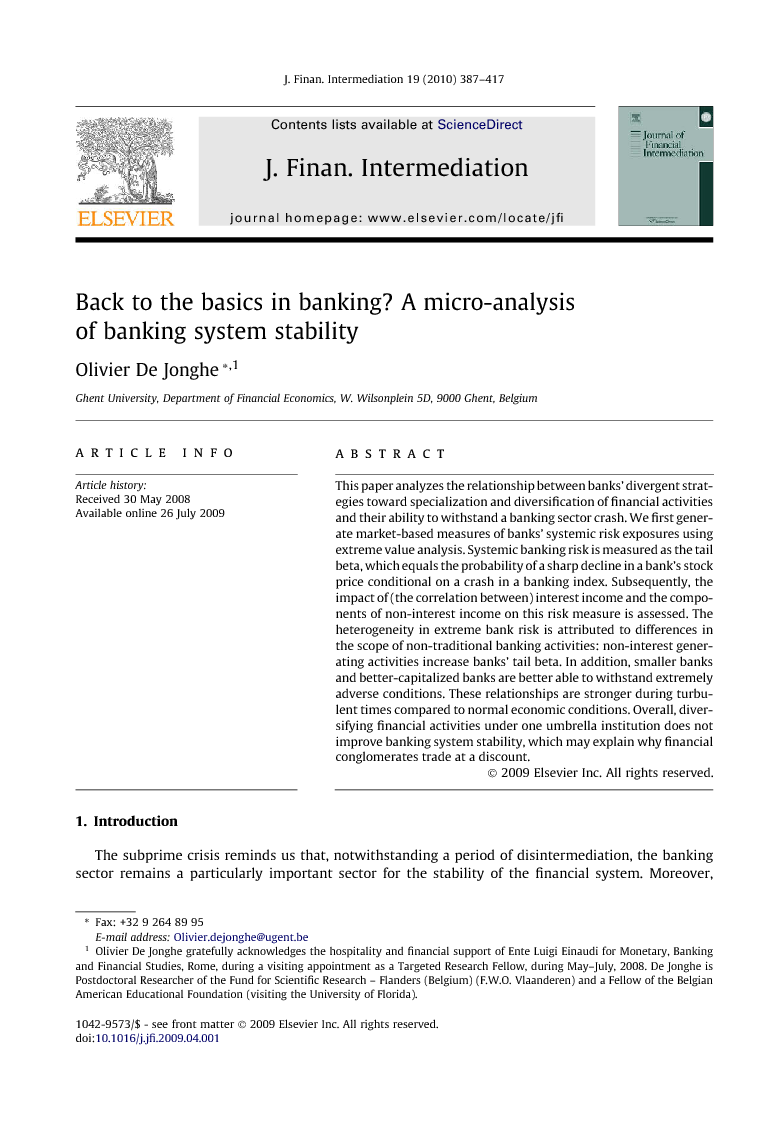 This paper analyzes the relationship between banks’ divergent strategies toward specialization and diversification of financial activities and their ability to withstand a banking sector crash. We first generate market-based measures of banks’ systemic risk exposures using extreme value analysis. Systemic banking risk is measured as the tail beta, which equals the probability of a sharp decline in a bank’s stock price conditional on a crash in a banking index. Subsequently, the impact of (the correlation between) interest income and the components of non-interest income on this risk measure is assessed. The heterogeneity in extreme bank risk is attributed to differences in the scope of non-traditional banking activities: non-interest generating activities increase banks’ tail beta. In addition, smaller banks and better-capitalized banks are better able to withstand extremely adverse conditions. These relationships are stronger during turbulent times compared to normal economic conditions. Overall, diversifying financial activities under one umbrella institution does not improve banking system stability, which may explain why financial conglomerates trade at a discount.

The banking sector occupies a central role in every economy and is a particularly important sector for the stability of financial systems. As a result, central bankers and financial supervisors invest a great deal of resources in analyzing how to strengthen the financial system, including the system of financial regulation and supervision, to reduce the frequency and severity of future bouts of financial instability. Reliable indicators of banking system stability are of the utmost importance. In this paper, we employ a recent approach to assess banking system risk (Hartmann et al., 2006). This statistical approach assesses the joint occurrence of very rare events, such as severe banking problems. More specifically, the bank-specific systemic risk measure captures the probability of a sharp decline in a bank’s stock price conditional on a crash in a European banking sector index. We discover considerable heterogeneity in banks’ contributions to overall banking sector stability. This observation should not be surprising in light of some remarkable developments over the last decades. Substantial banking consolidation, the dismantling of the legal barriers to the integration of financial services, and technological evolution all affected the organizational design of banking firms. These developments initiated the emergence of large and complex banking organizations. Yet some banks continue to specialize in traditional intermediation activities or target local customers. When relating the tail betas to bank-specific accounting variables, we can explain a fair amount of the cross-sectional dispersion in extreme bank risk. We establish that the shift to non-traditional banking activities increases banks’ tail betas and thus reduces banking system stability because interest income is less risky than all other revenue streams. Moreover, the impact of the alternative revenue shares (commission and fee income, trading income, other operating income) does differ substantially from one another. Other indicators of bank specialization in traditional intermediation, such as the net interest margin and the loans-to-assets ratio, corroborate the finding that traditional banking activities are less risky. Hence, we can conclude that banks that profitably focus on lending activities contribute more to banking system stability than diversified banks. This questions the usefulness of financial conglomeration as a risk diversification device, at least in times of stock market turmoil. Retail banks, with a relatively high proportion of core deposits and loans in total assets, have a consistently lower systemic risk exposure. Moreover, as long as capital regulation or deposit insurance premiums fail to include a premium for systematic risk, banks will have an incentive to take extreme systematic risks by engaging in non-interest activities. The established relationships bear implications for bank supervision. Bank size is by far the most significant driver of banks’ tail betas. Some particularly thorny issues are raised by the existence of financial institutions that may be perceived as “too big to fail” and the moral hazard issues that may arise when governments intervene in a financial crisis. The latter could be perceived as an implicit expansion of the safety net and may exacerbate the problem of “too big to fail”, possibly resulting in excessive risk-taking and still greater systemic risk in the future. Moreover, since the large banks are more exposed to European-wide (banking) shocks and economic conditions, their prudential supervision needs to take that feature into account. In Europe, increasing banking sector integration initiated by directives that led to the single market for financial services further complicated the tasks of national and supranational supervisors. This will be even more the case when banks further increase their cross-border activities, which strengthens the need for an integrated European supervisor for internationally operating banks. For the locally operating banks, supervision at the country level should suffice to assess the implications of their risk profile. In addition, the results are interesting in light of the third pillar of Basel II. Market participants, in addition to armies of regulators, will do some of the work in assessing the overall risk position of the bank. A larger capital buffer decreases a bank’s exposure to extreme shocks. This finding is expected and underlines the importance of capital adequacy as a signal of bank creditworthiness. Furthermore, a more complete and coherent disclosure of the different revenue streams facilitates a better understanding of the risks being taken by different institutions. The debate on the optimality and desirability of universal banking and financial conglomerates is still unsettled. Some blame the recent banking crisis of 2008 on a lack of regulation of certain financial activities or even deregulation with respect to the combination of commercial and investment banking. While it is unknown to what extent the crisis could have been avoided by more regulation, more disclosure and transparency of the different financial activities and the associated revenue streams would have helped in mitigating, identifying, and resolving many problems. Therefore, in European banking, steps need to be taken in order to get a more detailed and consistent picture of the underlying components of non-interest revenue, especially with respect to commission and fee income. The US reporting requirements, which since March 2001 include a 12-item distinction of non-interest income, may be a useful benchmark.