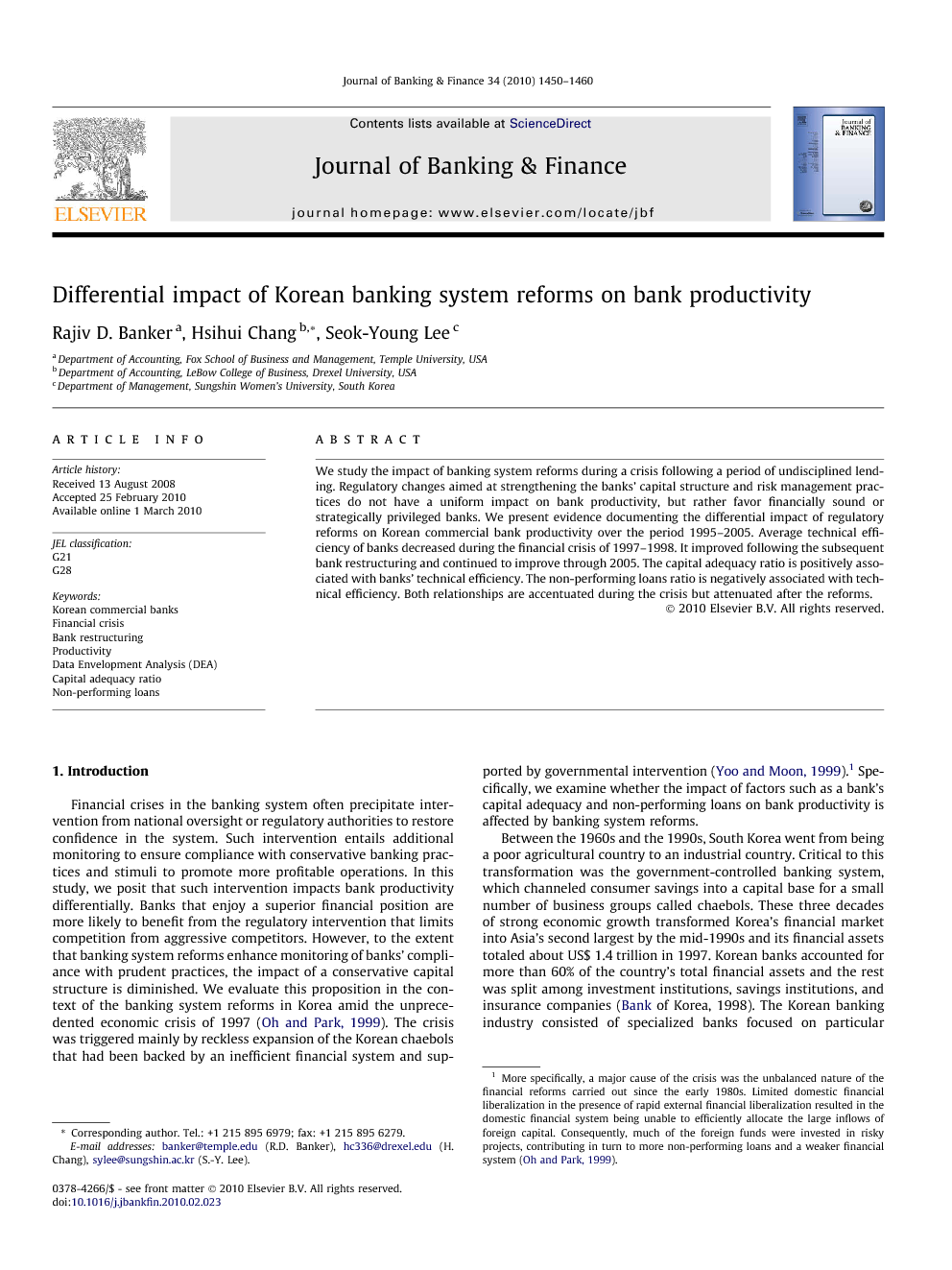 We study the impact of banking system reforms during a crisis following a period of undisciplined lending. Regulatory changes aimed at strengthening the banks’ capital structure and risk management practices do not have a uniform impact on bank productivity, but rather favor financially sound or strategically privileged banks. We present evidence documenting the differential impact of regulatory reforms on Korean commercial bank productivity over the period 1995–2005. Average technical efficiency of banks decreased during the financial crisis of 1997–1998. It improved following the subsequent bank restructuring and continued to improve through 2005. The capital adequacy ratio is positively associated with banks’ technical efficiency. The non-performing loans ratio is negatively associated with technical efficiency. Both relationships are accentuated during the crisis but attenuated after the reforms.

Financial crises in the banking system often precipitate intervention from national oversight or regulatory authorities to restore confidence in the system. Such intervention entails additional monitoring to ensure compliance with conservative banking practices and stimuli to promote more profitable operations. In this study, we posit that such intervention impacts bank productivity differentially. Banks that enjoy a superior financial position are more likely to benefit from the regulatory intervention that limits competition from aggressive competitors. However, to the extent that banking system reforms enhance monitoring of banks’ compliance with prudent practices, the impact of a conservative capital structure is diminished. We evaluate this proposition in the context of the banking system reforms in Korea amid the unprecedented economic crisis of 1997 (Oh and Park, 1999). The crisis was triggered mainly by reckless expansion of the Korean chaebols that had been backed by an inefficient financial system and supported by governmental intervention (Yoo and Moon, 1999).1 Specifically, we examine whether the impact of factors such as a bank’s capital adequacy and non-performing loans on bank productivity is affected by banking system reforms. Between the 1960s and the 1990s, South Korea went from being a poor agricultural country to an industrial country. Critical to this transformation was the government-controlled banking system, which channeled consumer savings into a capital base for a small number of business groups called chaebols. These three decades of strong economic growth transformed Korea’s financial market into Asia’s second largest by the mid-1990s and its financial assets totaled about US$ 1.4 trillion in 1997. Korean banks accounted for more than 60% of the country’s total financial assets and the rest was split among investment institutions, savings institutions, and insurance companies (Bank of Korea, 1998). The Korean banking industry consisted of specialized banks focused on particular segments of the economy, development institutions, and nationwide and regional commercial banks. While the Korean financial system driven by economic growth seemed to work well on the surface, the chaebols relied largely on bank financing with debt-to-equity ratios above 5:1 just before the financial crisis broke in 1997 (Baek et al., 2004). Three chaebol failures in six months shattered foreign and domestic confidence in the Korean economy. The Korea Stock Price Index (KOSPI) plunged more than 50%, and interest rates doubled from 12% to 25% during 1997 as the Korean currency declined in value relative to the dollar. By early 1998, most Korean financial institutions were struggling for survival under the strain of large and growing non-performing loans and collapsed investment portfolios, as Korean corporate bankruptcies averaged 500 a month during the first half of 1998. Before the financial crisis, in many cases the Korean government simply designated particular investment projects, allocating designated amounts of bank loans and imported foreign capital. Bank managers had no autonomy either in the decision to grant the loan or in determining the interest rate. From the point of view of banks, there was little incentive to review the proposed investment projects or provide advice and other assistance to loan recipients. Banks had only to follow government directions in making loans, and thus many bank loans were for investment projects with high default risks. Consequently, although the banks realized that large borrowers such as the chaebols were on the verge of default, they could not even declare them as failing firms for fear of repercussions throughout the whole economy (Yoo and Moon, 1999).2 These questionable banking practices had led to losses and weaker balance sheets for several banks. With more stringent monitoring of these practices, capital adequacy and non-performing loans portfolios became more critical during the financial crisis. The Korean banking reforms3 (Thompson, 1999 and Yoon and Miller, 2005) also required compliance with stringent capital adequacy ratios and supported various means to accomplish it, thus leveling the field for those banks that did not initially have a strong financial structure. As the banking industry emerged from the crisis and all banks complied with the financial requirements, their importance in discriminating between banks become less important. In accordance with agreements with the IMF (International Monetary Fund) and IBRD (International Bank for Reconstruction and Development), the second stage of bank restructuring4 was carried out beginning in June 2000 (Park and Weber, 2006a, p. 2374). This also enabled the acquisition of unsound banks by healthy banks and voluntary mergers among other banks, which led to a decrease in the number of banks from 26 in 1997 to 14 at the end of 2002. There were eight dominant nationwide banks (listed in Fig. 1) which were in a position to leverage their extensive networks and generate greater value from their acquisitions.5 Full-size image (46 K) Fig. 1. Classification of Korean commercial banks in 1995–2005. The numbers in parentheses indicate the proportion of total assets in 1997. In 1997, there were eight dominant nationwide banks (Commercial, Hanil, Korea First, Korea Exchange, Kookmin, Housing & Commercial, Cho Hung, and Seoul), four new nationwide banks (Shinhan, KorAm, Hana, and Boram), and 14 regional banks (Peace, Daedong, Dongnam, Kangwon, Chungbuk, Dongwha, Kyungki, Chungchong, Daegu, Pusan, Kwanju, Cheju, Jeonbuk, and Kyongnam). (Source: Bank of Korea (1998)). Figure options We analyze a panel of data over the period 1995–2005, using the two-stage approach of Data Envelopment Analysis (DEA). We first estimate the efficiency of each bank in each year followed by a regression of the estimated efficiency on potential contextual factors to obtain consistent estimators of their impact on the efficiency of banks (Banker and Natarajan, 2008). While the efficiency of Korean commercial banks decreased during the financial crisis in 1997–98, there was continued improvement from 1999 through 2005 with substantial cross-sectional differences in accordance with our expectations. The remainder of this paper is organized as follows. Section 2 describes our research hypotheses. Section 3 describes the data and Section 4 the estimation model used in this study. Section 5 contains the empirical results and Section 6 summarizes and concludes.

In this study, we investigate the impact of banking system reforms on bank technical efficiency and evaluated hypotheses about determinants of cross-sectional variations. We examine the Korean banking industry using a panel of data over the period 1995–2005. Using the two-stage approach of Data Envelopment Analysis (DEA) recommended by Banker and Natarajan (2008), we first compute the efficiency of banks using their interest expense and other operating expense as inputs and interest revenue and non-interest revenue as the two outputs. We then regress the logarithm of DEA productivity scores on contextual variables to consistently estimate the impact of the contextual factors on productivity and evaluate their statistical significance. Our empirical results indicate that the average technical efficiency of Korean commercial bank decreased at first during the financial crisis of 1997–98, but improved during 1999–2001 when bank restructuring occurred, and continued to improve through 2005. In addition, we document systematic cross-sectional differences in productivity gains across banks. Specifically, the positive impact of capital adequacy ratio and the negative impact on non-performing loans ratios on banks’ technical efficiency is first accentuated during the crisis and then attenuated during the post-banking reforms period. While the empirical results support our theoretical hypotheses about the role of capital adequacy ratio and non-performing loans ratio in explaining cross-sectional differences in productivity changes following regulatory reforms, these results should be interpreted cautiously when applied to other financial crisis events precipitating changes in regulation. We specify our empirical models and variables in keeping with prior literature and consider alternative explanatory variables. However, our study remains that of a single financial crisis, specifically that in Korea in 1997, and we cannot preclude the possibility of some unique factors pertaining to this case influencing the results. It will be interesting, therefore, to see additional research exploring the relationship documented in our study in the context of other financial crises and regulatory changes, such as the one experienced recently in 2008.