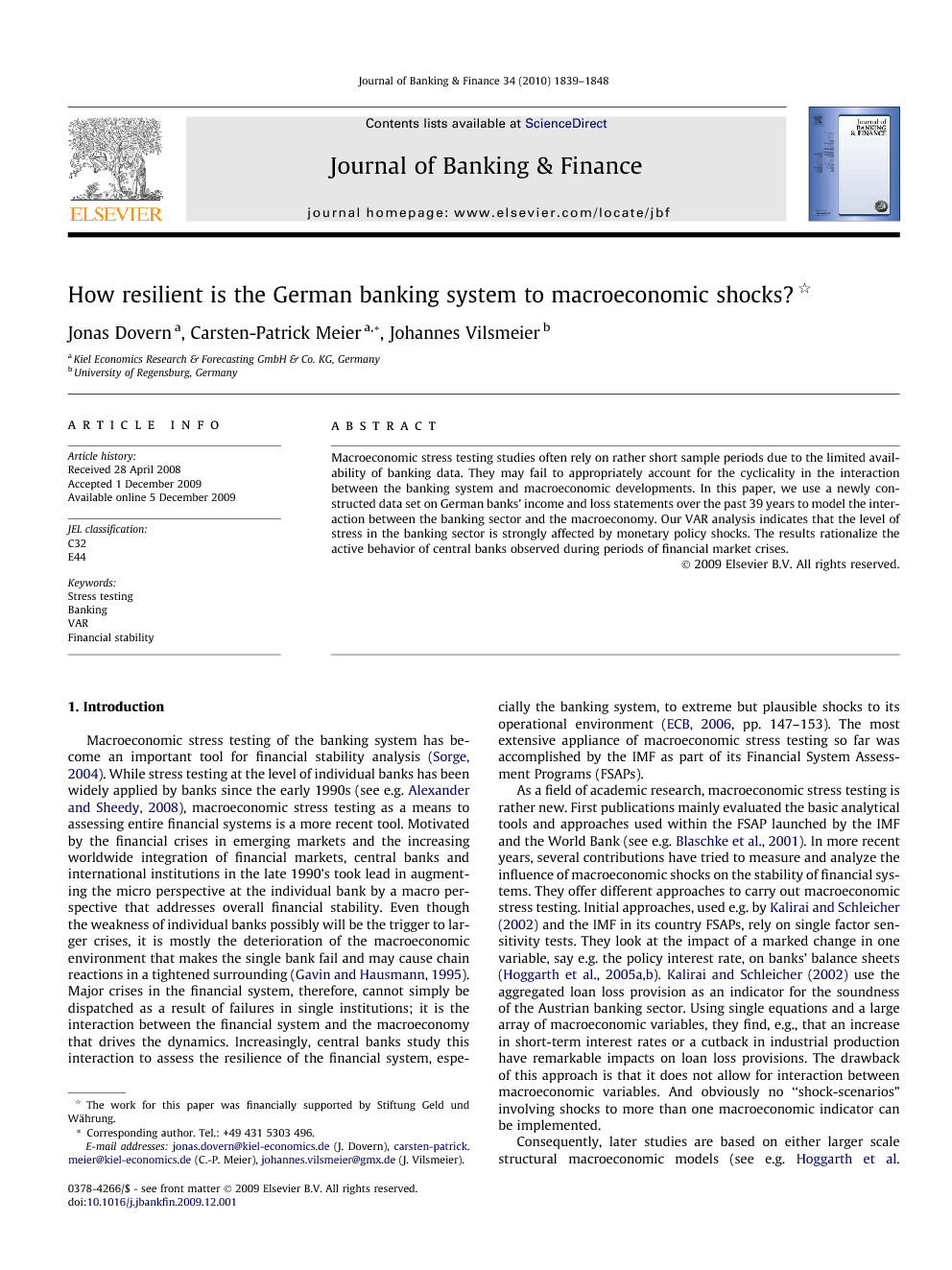 Macroeconomic stress testing studies often rely on rather short sample periods due to the limited availability of banking data. They may fail to appropriately account for the cyclicality in the interaction between the banking system and macroeconomic developments. In this paper, we use a newly constructed data set on German banks’ income and loss statements over the past 39 years to model the interaction between the banking sector and the macroeconomy. Our VAR analysis indicates that the level of stress in the banking sector is strongly affected by monetary policy shocks. The results rationalize the active behavior of central banks observed during periods of financial market crises.

This paper analyzes the impact of macroeconomic shocks on the soundness of the German banking sector on basis of a VAR approach. It is complementary to existing literature on macroeconomic stress testing in that it is based on a substantially longer sampling period than existing studies and in that the identification via the sign-restriction approach (Uhlig, 2005) relies only on a relatively weak set of assumptions. We estimate two VAR models and identify various structural shocks. The models differ with respect to the included indicator of stress in the banking system. One model contains write-offs, the other one return on equity. We estimate the impulse response functions for a contractionary monetary policy shock as well as a negative demand shock and a negative supply shock. The monetary policy shock has the largest impact on the stress indicators. Both write-offs and return on equity respond statistically significant to the shock. The effects are also significant in economic terms. In contrast, the aggregate demand shock induces stress into the banking system to a much more limited extend. The results show only marginally significant responses, which are also in magnitude smaller than following a monetary policy shock. We do not find any significant response of the distress indicators following an aggregate supply shock when identifying the structural VAR by the pure-sign-restriction approach; in contrast, we find such an effect when using the alternative penalty function approach. All in all, however, the results turn out to be robust with respect to the methodology used to identify the structural shocks. During the recent crisis on the credit markets – triggered by the problems on the US mortgage market – the Fed, the ECB, and the Bank of England reacted very quickly to ensure the functioning of financial markets. The provision of additional liquidity and more expansionary policy in terms of the policy rates than had been expected before the crisis became urgent can be seen as an expansionary monetary policy shock. Our results rationalize this behavior of the central banks to prevent banking crises. They suggest that monetary policy plays indeed a central role for the stability of the banking sector that is more important than demand or supply shocks.