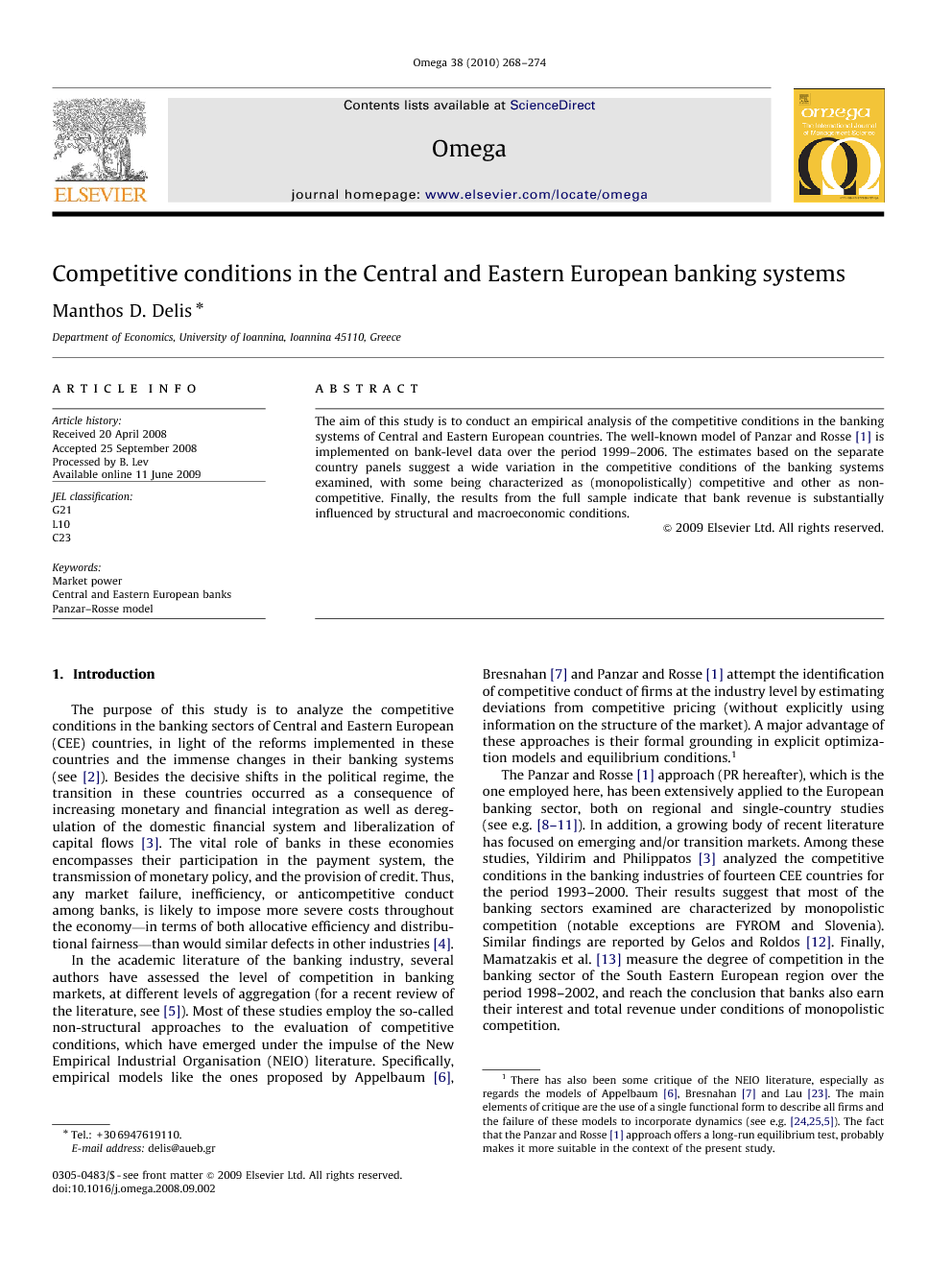 The aim of this study is to conduct an empirical analysis of the competitive conditions in the banking systems of Central and Eastern European countries. The well-known model of Panzar and Rosse [1] is implemented on bank-level data over the period 1999–2006. The estimates based on the separate country panels suggest a wide variation in the competitive conditions of the banking systems examined, with some being characterized as (monopolistically) competitive and other as non-competitive. Finally, the results from the full sample indicate that bank revenue is substantially influenced by structural and macroeconomic conditions.

The purpose of this study is to analyze the competitive conditions in the banking sectors of Central and Eastern European (CEE) countries, in light of the reforms implemented in these countries and the immense changes in their banking systems (see [2]). Besides the decisive shifts in the political regime, the transition in these countries occurred as a consequence of increasing monetary and financial integration as well as deregulation of the domestic financial system and liberalization of capital flows [3]. The vital role of banks in these economies encompasses their participation in the payment system, the transmission of monetary policy, and the provision of credit. Thus, any market failure, inefficiency, or anticompetitive conduct among banks, is likely to impose more severe costs throughout the economy—in terms of both allocative efficiency and distributional fairness—than would similar defects in other industries [4]. In the academic literature of the banking industry, several authors have assessed the level of competition in banking markets, at different levels of aggregation (for a recent review of the literature, see [5]). Most of these studies employ the so-called non-structural approaches to the evaluation of competitive conditions, which have emerged under the impulse of the New Empirical Industrial Organisation (NEIO) literature. Specifically, empirical models like the ones proposed by Appelbaum [6], Bresnahan [7] and Panzar and Rosse [1] attempt the identification of competitive conduct of firms at the industry level by estimating deviations from competitive pricing (without explicitly using information on the structure of the market). A major advantage of these approaches is their formal grounding in explicit optimization models and equilibrium conditions.1 The Panzar and Rosse [1] approach (PR hereafter), which is the one employed here, has been extensively applied to the European banking sector, both on regional and single-country studies (see e.g. [8], [9], [10] and [11]). In addition, a growing body of recent literature has focused on emerging and/or transition markets. Among these studies, Yildirim and Philippatos [3] analyzed the competitive conditions in the banking industries of fourteen CEE countries for the period 1993–2000. Their results suggest that most of the banking sectors examined are characterized by monopolistic competition (notable exceptions are FYROM and Slovenia). Similar findings are reported by Gelos and Roldos [12]. Finally, Mamatzakis et al. [13] measure the degree of competition in the banking sector of the South Eastern European region over the period 1998–2002, and reach the conclusion that banks also earn their interest and total revenue under conditions of monopolistic competition. In this paper, the scale of analysis is extended to 22 CEE countries for the last eight years of available data (1999–2006). Therefore, this paper augments previous studies by using (i) the entire set of CEE countries covered by the European Bank for Reconstruction and Development (EBRD) and (ii) very recent data. Providing a rigorous consensus on the level of competition in CEE banking markets may be quite important if one considers the fact that in many of these countries the deregulation and liberalization process has been completed during the 2000s, while in other countries this process is still underway. Moreover, as integration facilitates the actual or potential market entry of foreign institutions to the financially less developed CEE markets, existing banks will find themselves exposed to increased competitive pressure, which may lead to financial turbulence. A good a priori knowledge of the level of competition is, thus, of considerable importance. In a second step, the full sample is used to examine the impact of the significant structural and macroeconomic developments (that took place during the sample period) on bank revenue, the latter being an important element in the identification of market power in the PR framework. Enhancement of bank revenue, as a condition for enabling banking sectors to survive in a consolidated market by affording competitive interest rates, requires new standards in the forecasting of macroeconomic conditions, thus making the understanding of the relationships in hand essential. The rest of the paper is organized as follows. Section 2 presents some characteristics of the banking systems and macroeconomic environments of the CEE countries. Section 3 discusses the PR methodology and the estimation procedure. Section 4 presents and analyzes the empirical results. Finally, Section 5 concludes the paper.

This paper has described the competitive conditions in the CEE banking sectors over the period 1999–2006, using an empirical framework that is based on the seminal work of Panzar and Rosse [1]. The empirical findings suggest a wide variation of the competitive conditions between the banking systems examined, with some being characterized by significant market power, while others are closer to monopolistically competitive practices. In addition, the structural and macroeconomic environment is highly important in shaping bank revenues, which is a critical feature in the identification of market power under the PR approach. The extent that factors like increased foreign ownership, financial reform, deregulation and institutional characteristics are in a constant state of flux in the CEE countries, may have important implications for the conditions prevailing in the banking sector and the associated policies of the monetary and fiscal authorities. Increased competition in the banking markets will benefit investments and economic performance in the CEE countries, however too much competition may also lead to moral hazard activities and increased risk exposure. In light of the recent turmoil in financial markets, enhancement of bank profitability without hurting investment through anti-competitive practices in loan pricing requires new standards in risk management (capital and credit) and increased operating efficiency. To this end, further research in the competitive conditions of CEE countries, using novel econometric techniques, should address how internal (bank-specific) and external (structural, institutional and macroeconomic) characteristics shape the competitive conditions in these banking markets. As regards the internal characteristics bank risk-taking should probably be the key variable of the model (see [18]), while the initial conditions of the institutional environment should be an essential external characteristic, since they function as a prerequisite for the strength and health of transition banking sectors.