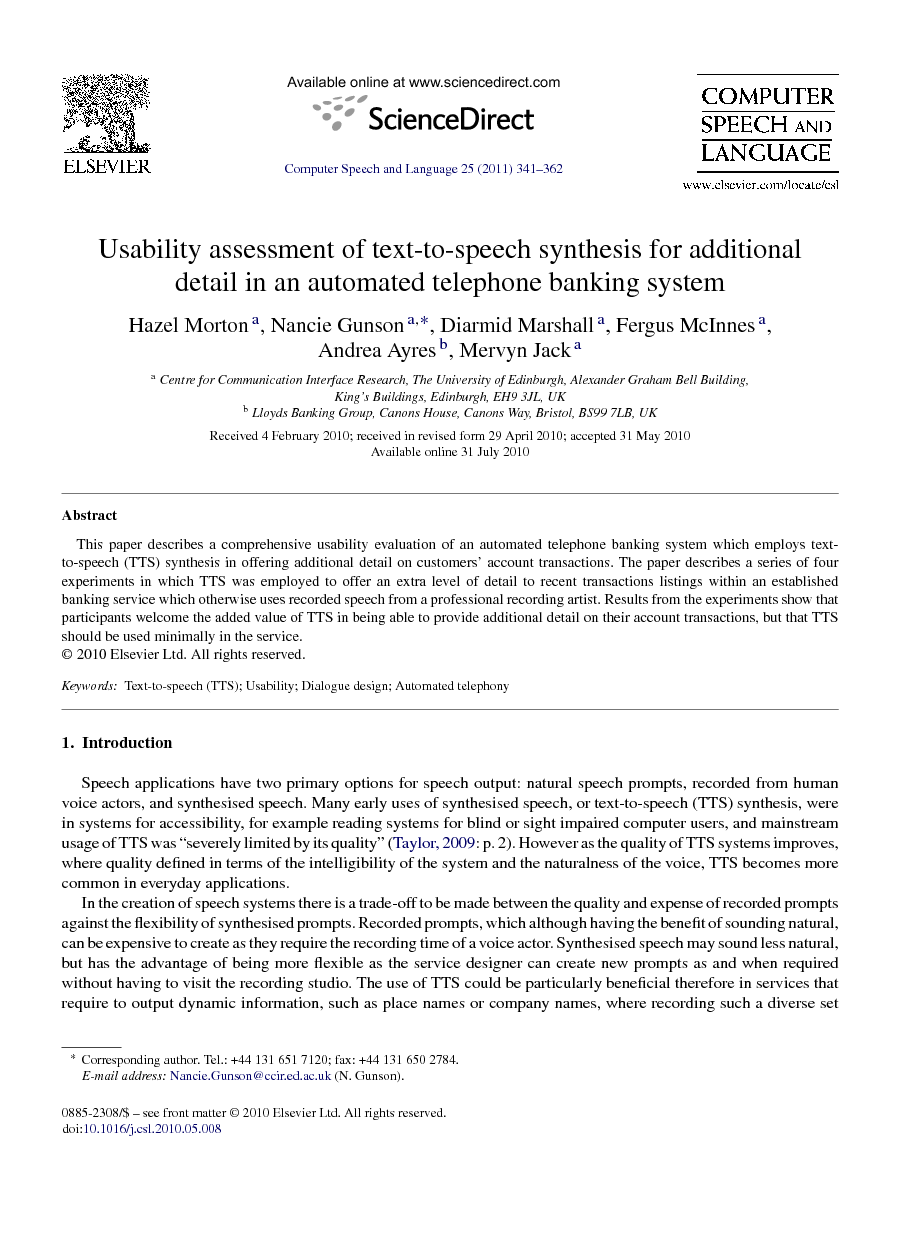 This paper describes a comprehensive usability evaluation of an automated telephone banking system which employs text-to-speech (TTS) synthesis in offering additional detail on customers’ account transactions. The paper describes a series of four experiments in which TTS was employed to offer an extra level of detail to recent transactions listings within an established banking service which otherwise uses recorded speech from a professional recording artist. Results from the experiments show that participants welcome the added value of TTS in being able to provide additional detail on their account transactions, but that TTS should be used minimally in the service.

Speech applications have two primary options for speech output: natural speech prompts, recorded from human voice actors, and synthesised speech. Many early uses of synthesised speech, or text-to-speech (TTS) synthesis, were in systems for accessibility, for example reading systems for blind or sight impaired computer users, and mainstream usage of TTS was “severely limited by its quality” (Taylor, 2009: p. 2). However as the quality of TTS systems improves, where quality defined in terms of the intelligibility of the system and the naturalness of the voice, TTS becomes more common in everyday applications. In the creation of speech systems there is a trade-off to be made between the quality and expense of recorded prompts against the flexibility of synthesised prompts. Recorded prompts, which although having the benefit of sounding natural, can be expensive to create as they require the recording time of a voice actor. Synthesised speech may sound less natural, but has the advantage of being more flexible as the service designer can create new prompts as and when required without having to visit the recording studio. The use of TTS could be particularly beneficial therefore in services that require to output dynamic information, such as place names or company names, where recording such a diverse set of prompts would be unfeasible. Importantly, the use of TTS in such a case can potentially add value to a system that otherwise would be more limited in the information it can provide. Previous research has investigated the usability and effectiveness of synthesised speech in a variety of applications, for example in a flight information system (McInnes et al., 1999), in a personal information management application (Gong and Lai, 2003), in tutoring applications (Baylor et al., 2003 and Forbes-Riley et al., 2006) and in a smart-home system (Möller et al., 2006). Research which investigated users’ perceptions of the personality of a synthesised voice compared with a recorded voice (on which the TTS system was modelled) found that the synthesised voice is associated with more negative personality characteristics than the recorded voice (Love et al., 2000). However other research which investigated synthesised speech in comparison to a number of recorded speech samples in a smart-home system found that synthesised speech prompts do not necessarily receive more negative ratings than recorded speech (Möller et al., 2006). Further, investigation was made of a combined recorded and synthesised voice compared to a fully synthesised voice. It was found that the combined recorded and synthesised version scored significantly higher than the fully synthesised version on overall quality, voice adequacy and voice pleasantness. However, no significant differences were found for listening effort. This study recommends that, as much as possible, recorded voices should be used and supplemented with synthesised when required, rather than opting for a fully synthesised system. In the evaluation of TTS systems, many empirical evaluations focus on the acceptability, naturalness and comprehensibility of the systems (Stern et al., 1999, Stevens et al., 2005 and Viswanathan and Viswanathan, 2005). Such research focuses on the comprehension or acceptability of TTS as a speech solution, that is, assessing TTS system prompts solely from a quality perspective. However, even if it can be assumed that the quality of TTS speech prompts are not as good as recorded prompts, the use of TTS in a dialogue system can be beneficial to its users by providing additional information that would be not be viable as a recorded prompt solution. Thus it is important to evaluate the use of TTS as a speech output solution from a usability perspective, within the context of a real-world application. The four studies described in this paper detail the evaluation of the usability of TTS within an already established dialogue system.