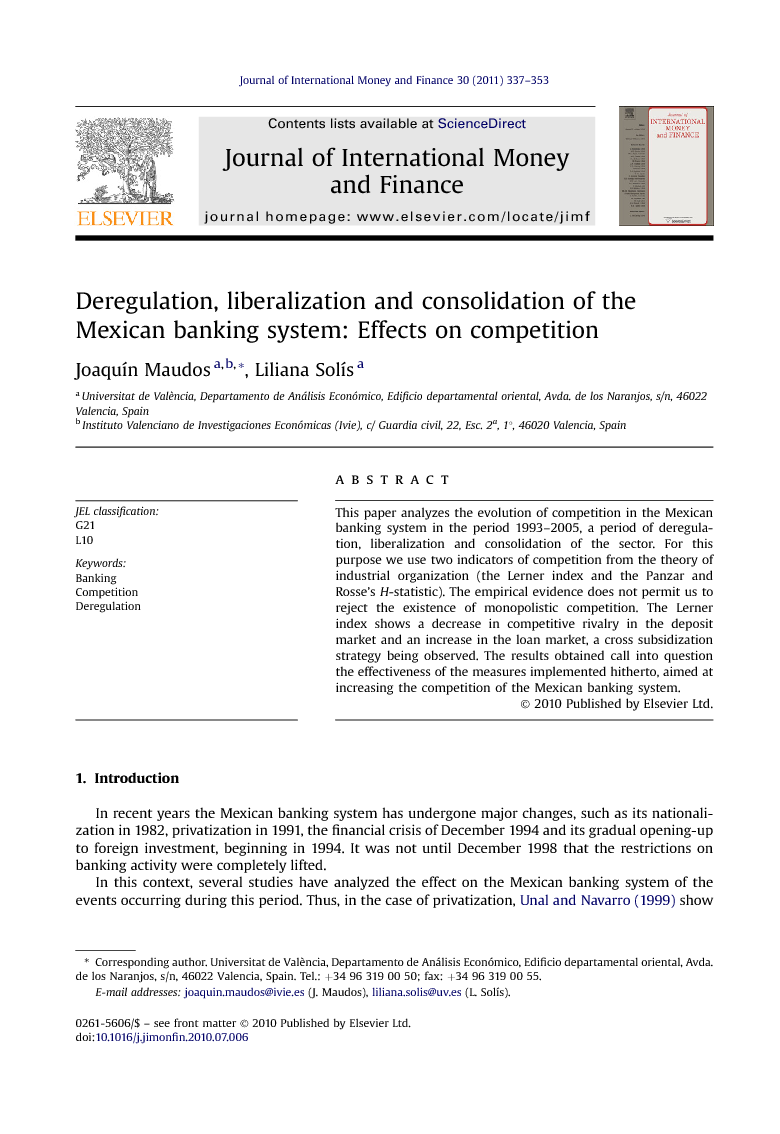 This paper analyzes the evolution of competition in the Mexican banking system in the period 1993–2005, a period of deregulation, liberalization and consolidation of the sector. For this purpose we use two indicators of competition from the theory of industrial organization (the Lerner index and the Panzar and Rosse’s H-statistic). The empirical evidence does not permit us to reject the existence of monopolistic competition. The Lerner index shows a decrease in competitive rivalry in the deposit market and an increase in the loan market, a cross subsidization strategy being observed. The results obtained call into question the effectiveness of the measures implemented hitherto, aimed at increasing the competition of the Mexican banking system.

The Mexican banking system has been subjected to major transformations as a consequence of the processes of nationalization (1982), privatization (1991), exchange rate crisis (December 1994), gradual opening-up to foreign investment (starting in 1994), and its consolidation from 2000 onwards with mergers among the principal banks. In this context of structural change, this paper analyzes the evolution of the degree of competition in the Mexican banking system from 1993 to 2005 using two instruments from the theory of industrial organization: the Panzar and Rosse H-statistic and the Lerner index of market power. Compared to other studies of the Mexican banking system, this one presents various novelties. Firstly, it uses the Lerner index to measure the evolution of market power. The advantage of using it is that it permits the evolution of competition to be analyzed with greater precision, and market power to be measured separately for the loans and deposits markets. Second, the analysis covers a long period, over which it can be observed whether the measures adopted (both privatization and the opening-up to foreign investment) have increased competition in the Mexican banking system. Previous studies have analyzed the consequences only of privatization ( Gruben and McComb, 2003) or of the opening-up to foreign investment ( Dueñas, 2003). And thirdly, banking competition is analyzed using two indicators (the H-statistic of Panzar and Rosse, and the Lerner index). The empirical evidence offered by the H-statistic does not permit us to reject the existence of monopolistic competition, a result that is consistent with those of Dueñas (2003) for the period from January 1997 to September 2002, Claessens and Laeven (2004) for the period 1994–2001 and Gelos and Roldós (2004) from 1994 to 1999. Results are robust when total revenues are considered (including therefore financial and non-financial revenues). The separate evolution of the Lerner index for each of the two banking markets analyzed shows that, from 1993 to 2005, market power decreased in the loans market while it increased in the deposits market. By sub-periods, with the crisis there occurred an increase in inflation and in interest rates, leading to greater market power both in loans and in deposits. Following the crisis, there was a decrease in credit activity, asset margins being practically nil. On the other hand, in this period the banks worked with very high liability margins. From 1997 to 2005, there was cross subsidization in the services offered by the Mexican banking system, granting loans with very small and even negative margins (with the aim of attracting or keeping clients), recuperating this loss by setting higher margins on deposits. Results show that the net effect of this cross subsidization strategy, together with the increase in activity with repos, was highly profitable for the banks, as shown by the fact that the levels of profitability (ROA) have increased substantially since 1998. The results obtained permit us to conclude that the measures adopted and the transformations experienced by the Mexican banking system during recent years have not in general translated into greater competitive rivalry. Specifically, the results indicate that once the sale of the commercial banks to the private sector had been completed, the intensity of competition increased. Subsequently, the exchange rate crisis had an adverse effect on inflation and on interest rates, inducing an increase in market power in loans and deposits. Finally, once the restrictions on the entry of foreign capital had been completely eliminated in 1998, market power increased in deposits, while it decreased in the loans market, consolidating the following of a cross subsidization strategy. Consequently, it is possible that part of the recent growth of the profitability levels of the Mexican banking system is due to a decrease in competitive rivalry in the banking markets, which would permit us to call into question the efficacy of the measures so far implemented. The results relating to the period which started in 1997 with reforms designed to improve monitoring and recapitalize the banks (new accounting standards, increase in the capital requirements, reforms in the deposit insurance, removal of restrictions on foreign bank acquisitions of Mexican banks, etc.) increased the level of banks’ risk aversion. This in turn was a disincentive to finance activities which were more profitable (but riskier). In this climate of risk aversion, banks preferred to finance safer investments with lower and even negative margins, whose unprofitability was subsidized by applying higher margins on passive operations. Therefore the results in terms of competition can be interpreted as the Mexican banking sector’s reaction to the credit crisis of the mid-nineties. One lesson derived from the results of our paper is the importance of adequately assessing banks’ reaction to the reforms implemented. The experience of the reforms adopted during the liberalization experiment (which took place in 1997) shows that banks were reluctant to extend credit to the private sector and decided to finance only the less risky borrowers with low returns (with a loan interest rate close to the money market rate). In the current economic crisis, possible measures to adopt should avoid any significant increase in the level of banks’ risk aversion, given that in this case recovery from the crisis will be much slower. However, the reforms implemented during the last ten years after the 1995 crisis to improve the legal framework, financial regulation and supervision processes have indeed shown results, although given the severity of the current crisis the Mexican banking sector faces some important challenges.