عنوان انگلیسی
Efficiency under quantile regression: What is the relationship with risk in the EU banking industry?
دانلود فوری مقاله + سفارش ترجمه 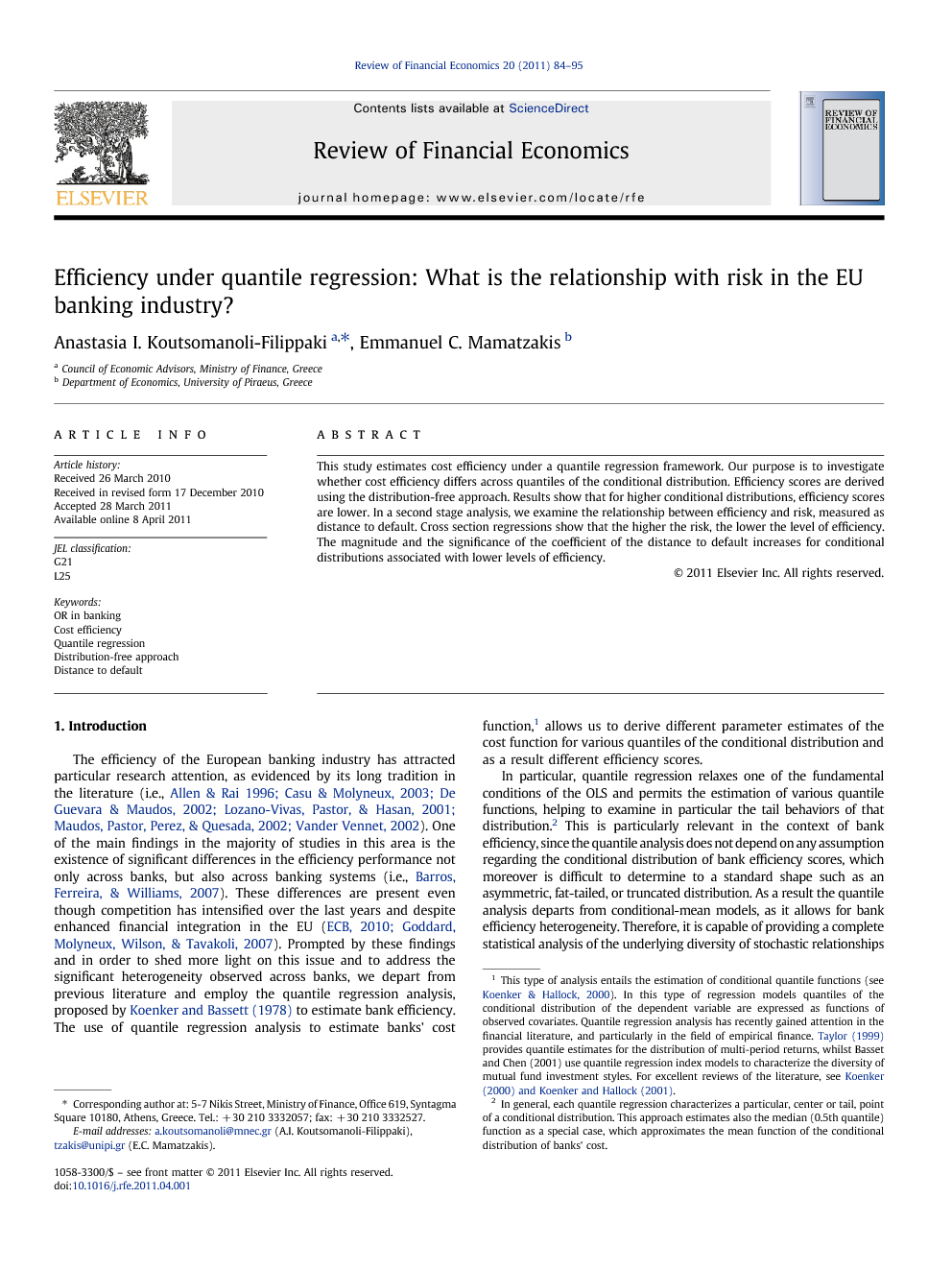 The efficiency of the European banking industry has attracted particular research attention, as evidenced by its long tradition in the literature (i.e., Allen and Rai, 1996, Casu and Molyneux, 2003, De Guevara and Maudos, 2002, Lozano-Vivas et al., 2001, Maudos et al., 2002 and Vander Vennet, 2002). One of the main findings in the majority of studies in this area is the existence of significant differences in the efficiency performance not only across banks, but also across banking systems (i.e., Barros, Ferreira, & Williams, 2007). These differences are present even though competition has intensified over the last years and despite enhanced financial integration in the EU (European Central Bank, 2010 and Goddard et al., 2007). Prompted by these findings and in order to shed more light on this issue and to address the significant heterogeneity observed across banks, we depart from previous literature and employ the quantile regression analysis, proposed by Koenker and Bassett (1978) to estimate bank efficiency. The use of quantile regression analysis to estimate banks' cost function,1 allows us to derive different parameter estimates of the cost function for various quantiles of the conditional distribution and as a result different efficiency scores. In particular, quantile regression relaxes one of the fundamental conditions of the OLS and permits the estimation of various quantile functions, helping to examine in particular the tail behaviors of that distribution.2 This is particularly relevant in the context of bank efficiency, since the quantile analysis does not depend on any assumption regarding the conditional distribution of bank efficiency scores, which moreover is difficult to determine to a standard shape such as an asymmetric, fat-tailed, or truncated distribution. As a result the quantile analysis departs from conditional-mean models, as it allows for bank efficiency heterogeneity. Therefore, it is capable of providing a complete statistical analysis of the underlying diversity of stochastic relationships among stochastic variables by supplementing the estimation of conditional mean functions with an entire family of conditional quantile functions. The use of quantile regression techniques in the context of bank efficiency is rare, with the exception of Behr (2010),3 and therefore comparative studies are limited. In any case, this is the first study to use quantile regression in a cross-country comparison of efficiency scores. Departing from the standard conditional regression analysis, the main question this paper aims to answer, thus addressing a significant gap in the literature, is: what is the bank's i cost efficiency across different quantiles? To this end, we investigate whether cost efficiency differs across quantiles of the conditional distribution and whether there is a general trend that can describe the evolution of efficiency scores when estimated for different quantiles. In addition, we are also dealing with the question; does risk affect efficiency and how does this relationship evolve across quantiles? This interaction has become particularly important, in light also of recent adverse events in global financial markets. In particular, several shortcomings in the functioning of the global financial system and more specifically, significant incentive misalignments have greatly contributed, at the micro level, to the current financial turmoil ( Caprio, Demirguc-Kunt, & Kane, 2008). In essence, these misaligned incentive structures have contributed to an understatement of true risk, generating mispricing of credit instruments. In light of this, the quantile regression analysis allows us to examine whether the underlying relationship between risk and performance changes across quantiles. This is an issue of particular importance as the recent crisis has demonstrated that the tales of the distribution, i.e. representing higher risk, may hold the key for understanding the underlying reasons for the malfunctions in the banking industry. Several studies have in the past tried to investigate the appealing relationship between efficiency and risk. Berger and DeYoung (1997) provide an excellent analysis on the possible relationship between credit risk, efficiency and bank capital, offering four alternative hypotheses, i.e. the ‘bad management’, the ‘bad luck’, the ‘skimping’ and the ‘moral hazard’ hypotheses.4 On theoretical grounds, evidence on this relationship can also be found in the charter theory of Keeley (1990), who argues that declines in bank charter values caused banks to increase default risk through increases in asset-risk and reductions in capital. Most researchers (i.e., Berger and DeYoung, 1997) have focused on the relationship between efficiency and credit risk, while a related strand of the literature has examined the relationship between efficiency and bank failure (Berger and Humphrey, 1992 and Wheelock and Wilson, 1995) and found that failing banks tend to locate far from the efficiency frontier. To empirically estimate cost efficiency, we follow Berger (1993) and employ the Distribution-free approach (DFA thereafter). As a measure of risk, we use banks' distance to default (DD thereafter) (see Merton, 1974). This measure has the advantage over traditional risk proxies based on accounting data, of using the forward-looking information incorporated into security prices. More specifically, it combines information about stock returns with leverage and volatility information, thus capturing the most important determinants of default risk.5 Moreover, apart from risk, we also examine the relationship between efficiency and various bank specific and macroeconomic variables across quantiles. A first glimpse at the results shows that efficiency scores exhibit marked diversity across quantiles, a finding which would go unnoticed in the classical efficiency estimations. In particular, we note that in higher quantiles average cost efficiency is lower compared to that in lower quantiles. In addition, our analysis regarding the relationship between risk and efficiency suggests that there is a positive interrelation between bank efficiency and distance to default, especially in the case of lower conditional distributions. Moreover, the second-stage regression analysis reveals that the interaction between efficiency and various banking and macroeconomic variables varies substantially across quantiles. Two notable examples are the relationship between cost efficiency and bank concentration and the relationship between efficiency and credit risk. The rest of the paper is organized as follows. Section 2 presents a brief review of the literature, Section 3 analyses the methodology, while Section 4 provides the description of the data. Section 5 discusses the empirical results, while conclusions are drawn in Section 6.