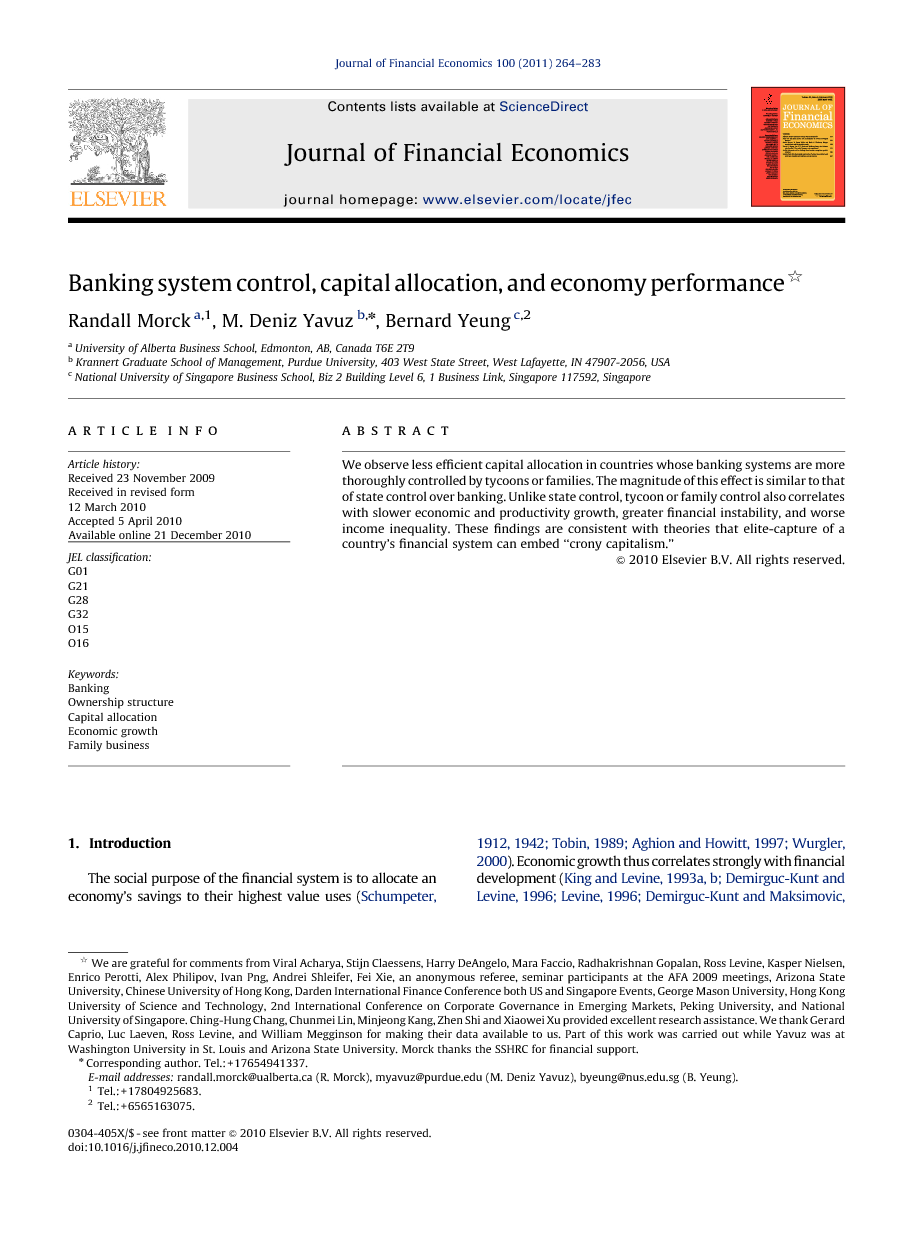 We observe less efficient capital allocation in countries whose banking systems are more thoroughly controlled by tycoons or families. The magnitude of this effect is similar to that of state control over banking. Unlike state control, tycoon or family control also correlates with slower economic and productivity growth, greater financial instability, and worse income inequality. These findings are consistent with theories that elite-capture of a country’s financial system can embed “crony capitalism.”

Who controls a country’s banks matters. Controlling for capital market development and initial GDP per capita, we find that national banking systems entrusted more predominantly to tycoons and business families (called family controlled for brevity) correlate with worse economy-level outcomes: less efficient capital allocation, more nonperforming loans, more frequent bank crises, greater macro volatility, and slower income and productivity growth rates. Our findings support the thesis of Rajan and Zingales (2003) that an initial cadre of entrepreneurs (or their heirs), made rich by their country’s newly developed financial system, subsequently seek to reverse that development to lock in their dominance by limiting entrants’ access to external capital. Because cross-country empirical evidence suggests that banks provide essential capital for new and small firms (Beck, Demirgüç-Kunt, and Maksimovic, 2008), control over the banking system is a likely place to look for this effect. Consistent with these arguments, we find family control over banks correlated with traditional signs of crony capitalism, such as high inequality and barriers to entry. Moreover, our findings emphasize family control of the banking system specifically, rather than their control of large businesses in general. That control of the financial system is especially critical supports the thesis of Rajan and Zingales, 2003 and Rajan and Zingales, 2004: incumbent elites might lock in the status quo by blocking upstarts’ and competitors’ access to outside capital. However, family control over banking is quite likely only part of the story, and further work exploring the importance of pyramidal business groups and their influence over other sources of capital might well be fruitful. Of course, our findings imply neither that all controlling tycoons and families are entrenched nor that their control has these associations in all time periods and all financial crises. Rather, they render cases where the opposite result occurs especially intriguing. Finally, our findings call for further corporate finance research into “elite capture”; wherein a minority religious group, ethnic group, or economic elite controls an economic, political, or other institution to advance the minority’s interests, rather than general social welfare (Glaeser et al., 2003 and Hellman et al., 2003; and others). Elite capture of a country’s financial system may well be an important element of “crony capitalism” (e.g. Murphy et al., 1991, Murphy et al., 1993, Shleifer and Vishny, 1993, Shleifer and Vishny, 1998, Haber, 2002, Krueger, 2002, Rajan and Zingales, 2004, Morck et al., 2005, Acemoglu et al., 2005, Daniels and Trebilcock, 2008 and Fisman and Miguel, 2008) that underlies financial development reversals specifically (Rajan and Zingales, 2003 and Rajan and Zingales, 2004) and persistent financial underdevelopment more generally (King and Levine, 1993a and King and Levine, 1993b).