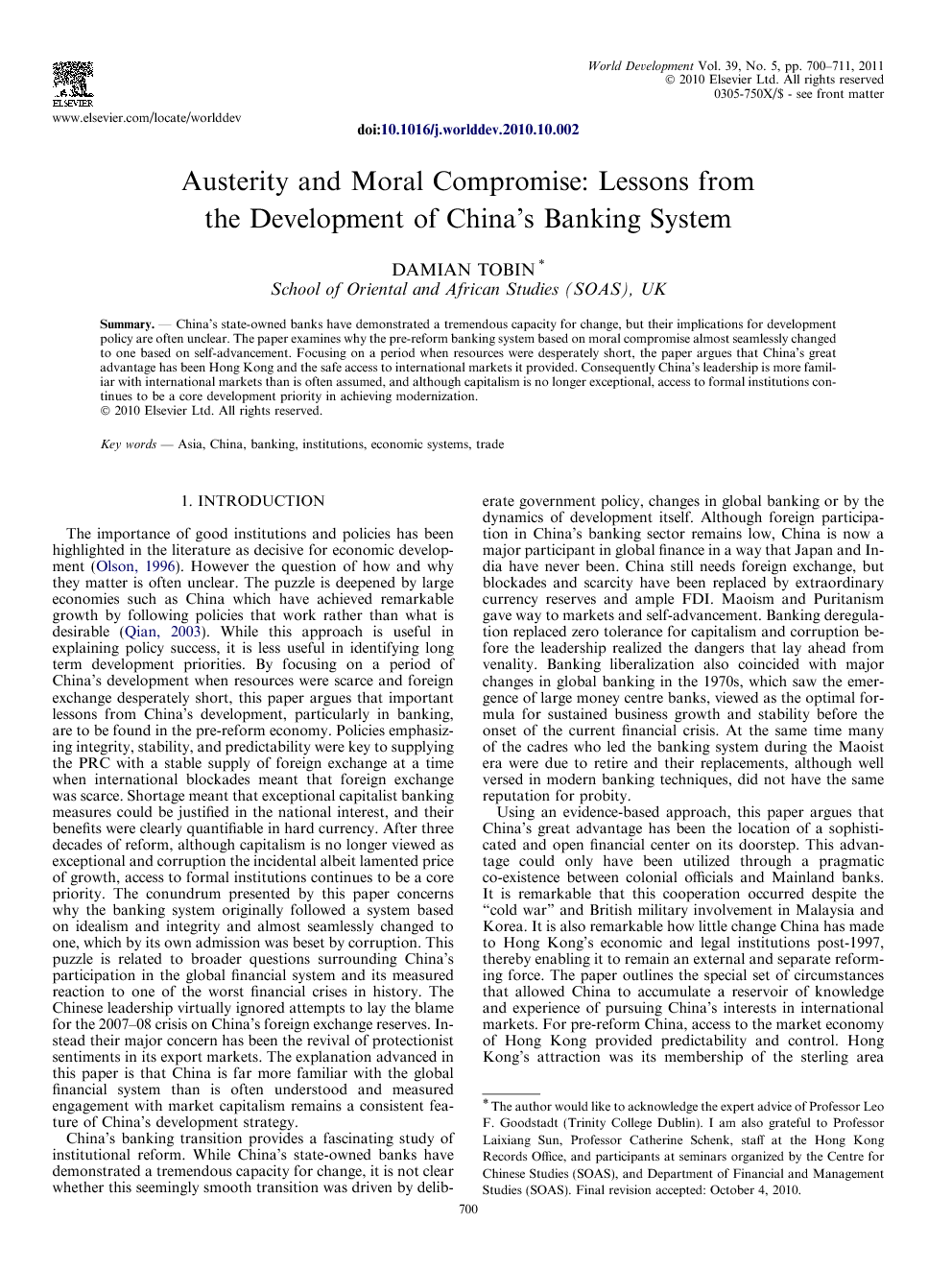 China’s state-owned banks have demonstrated a tremendous capacity for change, but their implications for development policy are often unclear. The paper examines why the pre-reform banking system based on moral compromise almost seamlessly changed to one based on self-advancement. Focusing on a period when resources were desperately short, the paper argues that China’s great advantage has been Hong Kong and the safe access to international markets it provided. Consequently China’s leadership is more familiar with international markets than is often assumed, and although capitalism is no longer exceptional, access to formal institutions continues to be a core development priority in achieving modernization.

The lessons of China’s pre-reform banking system are that state policies to overcome scarcity, access efficient institutions and mobilize finance matter. Under the pre-1978 economy China’s state banks in Hong Kong represented the interface between market capitalism and communist planning. Remarkably for a communist organization, they operated according to capitalist principles, assuming that practices that were not expressly prohibited by colonial law could be adopted. This created an obvious contradiction with what was happening on the Mainland. Yet, this was tolerated because it was a political necessity. In the face of political hostility and embargos, China’s banking system displayed an extraordinary understanding of the importance of access to efficient institutions. Not only did it use this understanding to help solve serious resource shortages in the 1960s, but it is no coincidence that many of reforms undertaken after 1979 were already pre-empted by PRC banks in Hong Kong during the 1970s. The true advantage of accessing international financial institutions can be seen in their ability to grasp major changes in global banking in the 1970s. Their activities were, therefore, driven by a type of economic dynamism that was driven by development in the global financial system, but had its roots in the drive for socialist modernization. The lessons from this turbulent period emphasize rather than refute the importance of formal financial institutions. Banking reforms meant that such activities were no longer exceptional. They also undermined the moral compromise and sacrifices of the pre-reform era. Their justification was to accelerate growth but they had serious drawbacks. It is perhaps unsurprising then that post-1978 reforms in banking did not lead to the types of improvements envisaged by the leadership. China’s banking institutions have yet to reach international standards. Banks have been shown to be just as susceptible to malpractices as other parts of the economy. The pre-reform system suggested few obvious signals of the problems that were to follow. Foreign investment is still predictable, but is now sourced from foreign direct investment. Its benefits are no longer so easily quantifiable and have become increasingly difficult for Mainland authorities to control. Nevertheless the benefits of accessing formal finance or finding a secure area to do business remains a consistent but underexplored feature of China’s transition as does the extent to which moral hazard has replaced moral compromise in China’s engagement with the international financial system.