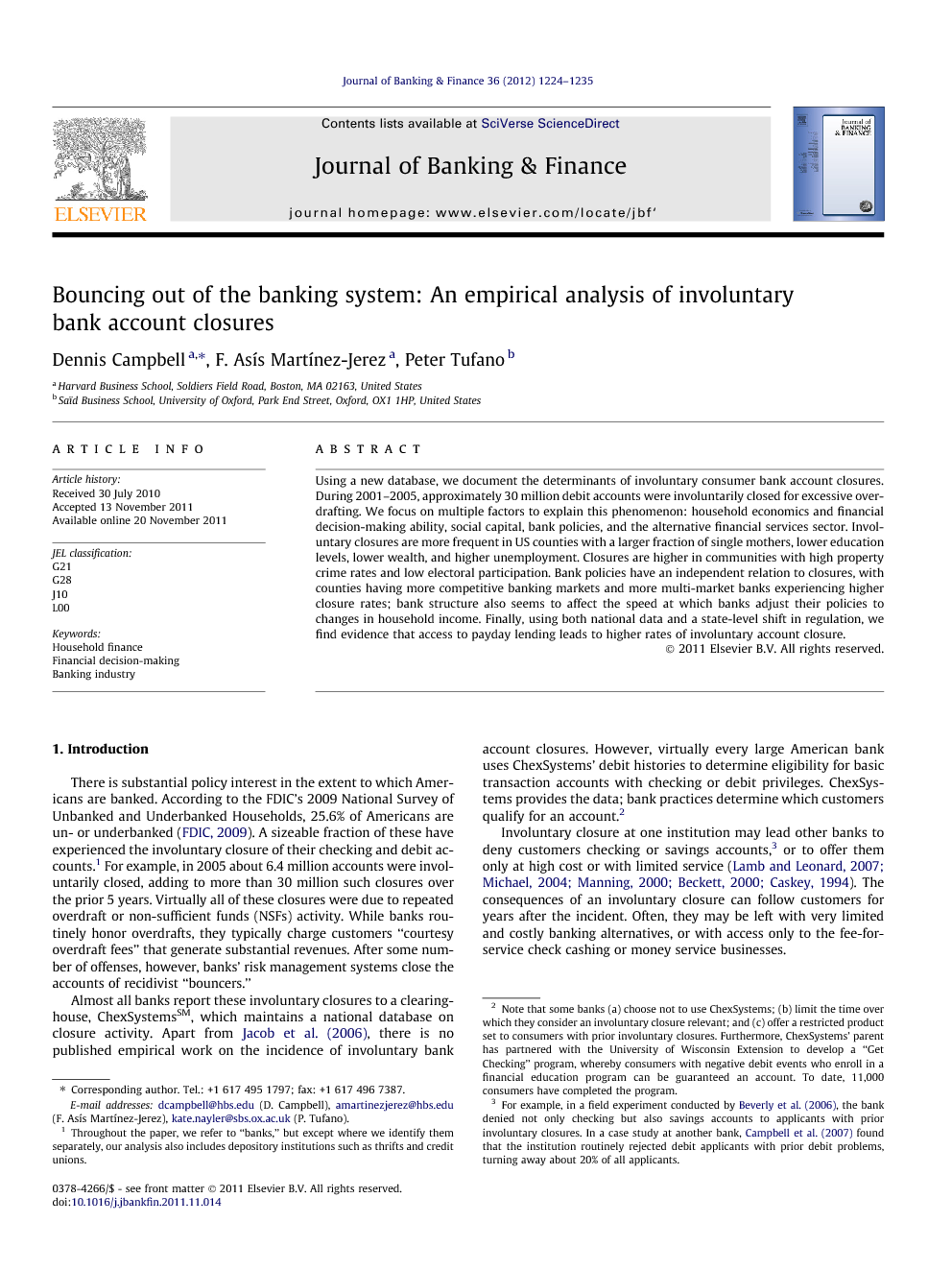 Using a new database, we document the determinants of involuntary consumer bank account closures. During 2001–2005, approximately 30 million debit accounts were involuntarily closed for excessive overdrafting. We focus on multiple factors to explain this phenomenon: household economics and financial decision-making ability, social capital, bank policies, and the alternative financial services sector. Involuntary closures are more frequent in US counties with a larger fraction of single mothers, lower education levels, lower wealth, and higher unemployment. Closures are higher in communities with high property crime rates and low electoral participation. Bank policies have an independent relation to closures, with counties having more competitive banking markets and more multi-market banks experiencing higher closure rates; bank structure also seems to affect the speed at which banks adjust their policies to changes in household income. Finally, using both national data and a state-level shift in regulation, we find evidence that access to payday lending leads to higher rates of involuntary account closure.

Involuntary debit account closure is a frequent occurrence in the United States, with over 30 million accounts closed over a 6-year period. The impact of involuntary account closure is a concern for policymakers and consumer advocates who argue that the “unbanked,” “underbanked,” or “self-banked” may pay high costs for basic services or have limited access to additional financial services, such as credit. Our paper provides the first look at the incidence of involuntary closures using county-level data for the United States taken from an industry-standard database maintained by ChexSystems. The hypotheses we use to explain the incidence of involuntary closuresare drawn from economics (at both the individual and bank level), psychology, and sociology. While one might think that involuntary closures are primarily driven by poverty, this turns out not to be the case. Our analysis of ChexSystems’ data reveals that differences in the rate of involuntary account closures across and within counties are only partially explained by negative shocks to income and proxies for populations where margins between income and expenses are thin (e.g. poverty rates and the presence of single mothers). Even after controlling for income, financial assets, poverty, family structure, and unemployment, we find that rates of involuntary account closure are explained by other measures related to consumers’ ability to budget and forecast (education and age); bank incentives (local versus multi-market banks and competition); community norms and social capital; and the availability of credit through payday lending. Furthermore, banking practices and bank characteristics can help reconcile the seemingly contradictory impacts of income levels and changes on closures. As with any multivariate analyses, one cannot rule out the possibility that the measured variables are capturing effects of omitted variables. However, even after using a relatively rich set of explanatory variables, it seems troubling to find such high rates of involuntary account closure for certain groups, including single mothers and particular racial populations. These results call out for further study. In the current environment, where regulation of consumer financial services is the subject of tremendous debate, our results—which are consistent with higher involuntary closures where banks are less local and markets more competitive—require careful scrutiny. One interpretation is benign: greater competition, especially from non-local banks, encourages banks to open debit accounts for more Americans. While some of these individuals may be incapable of managing these accounts, the extension of banking services is a positive social good. A second interpretation is less benign: banks’ extension of overdraft-based revenue models to financially vulnerable customers leads to more fee income for the banks, but raises the cost of basic banking and ultimately leads these individuals to be “bounced” out of the system. Similarly, our results about the interaction between banking and payday lending raise many questions. Both in a large cross-section and in our analysis of the Georgia payday lending ban, we find a positive relationship between the existence of payday lending and involuntary account closures. A benign interpretation might be that a checking account is necessary for someone to use payday lending; where there is less payday lending, there is less need for a bank account. However, this explanation would not account for the involuntary closure of accounts. A less benign implication would be that the presence of this high-cost, short-term credit adds to the over-extension of household budgets, and exacerbates the rate at which households overdraw their accounts. While the paper raises many new questions, we believe that it makes a number of contributions. First, while many financial economists are eager to study relatively advanced financial “mistakes” (e.g., refinancing mortgages or failing to participate in equity markets), we call attention to a level of financial mismanagement that is unfortunately endemic and poorly understood. Second, by adopting perspectives from many disciplines, we find that this household “failure” cannot be understood from a single lens. It seems related to family economics, behavioral and cognitive factors, community structure, banking competition and incentives, and competition from non-banks. Third, by documenting the populations that seem most subject to this behavior, our paper helps to pinpoint areas where basic financial education, automatic defaults, or other “nudges” might be directed.