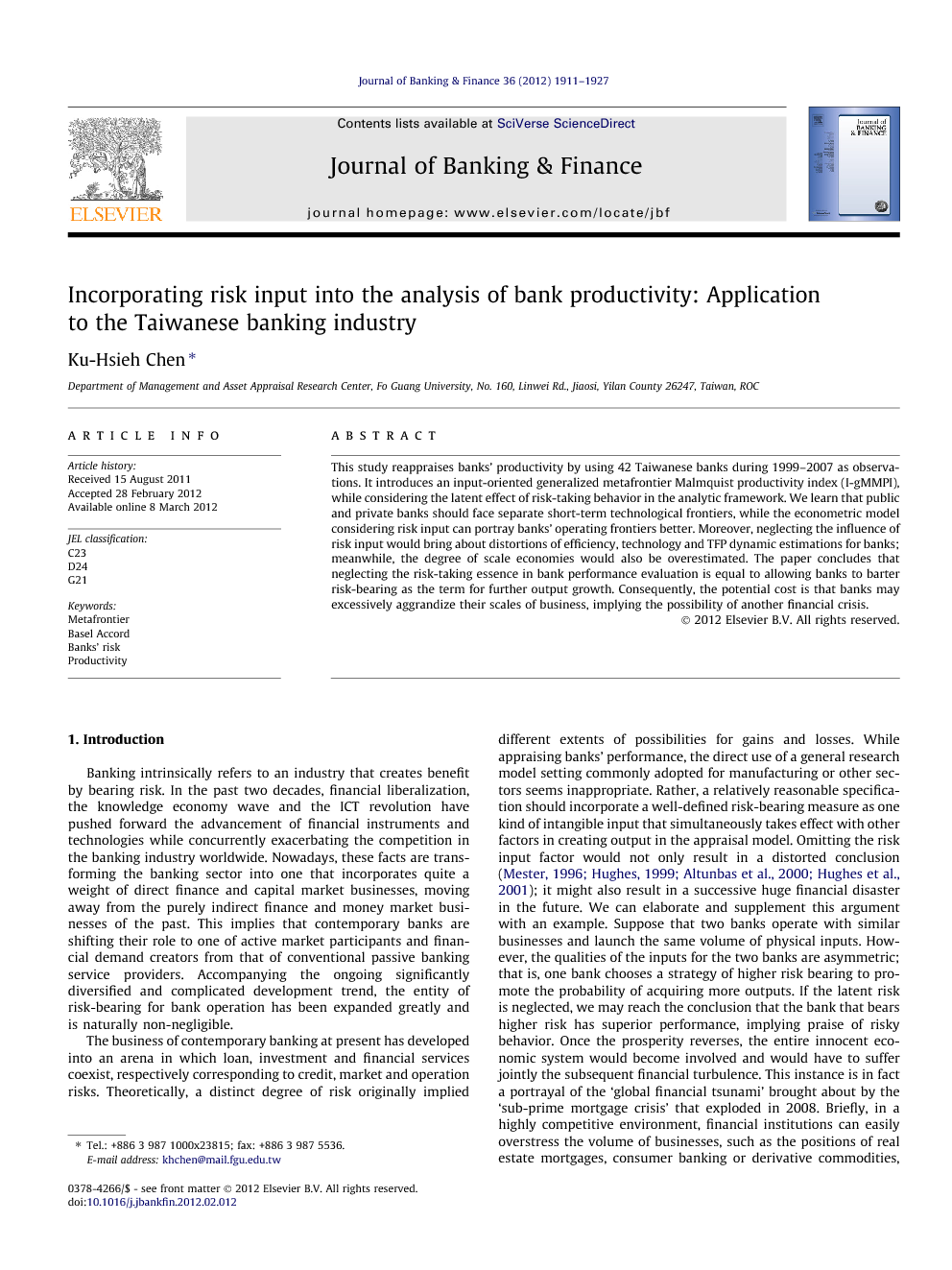 This study reappraises banks’ productivity by using 42 Taiwanese banks during 1999–2007 as observations. It introduces an input-oriented generalized metafrontier Malmquist productivity index (I-gMMPI), while considering the latent effect of risk-taking behavior in the analytic framework. We learn that public and private banks should face separate short-term technological frontiers, while the econometric model considering risk input can portray banks’ operating frontiers better. Moreover, neglecting the influence of risk input would bring about distortions of efficiency, technology and TFP dynamic estimations for banks; meanwhile, the degree of scale economies would also be overestimated. The paper concludes that neglecting the risk-taking essence in bank performance evaluation is equal to allowing banks to barter risk-bearing as the term for further output growth. Consequently, the potential cost is that banks may excessively aggrandize their scales of business, implying the possibility of another financial crisis.

Unlike other sectors, the banking industry originally embeds fairly high risk-taking implications into its business. For the operation of a bank, moderation is theoretically the first concern. Banks themselves should endogenously consider and control to a great extent both the willingness and the capacity to take risk, rather than fully deciding exogenously. Therefore, while investigating the banks’ performance, we should take into account the endogenous decisional essence of the risk-bearing attitude. Otherwise, the research outcome might very possibly reveal that the relative speculative banks have superior performance. It would then further imply a biased conclusion in praise of banks’ higher risky behavior. This paper aims at the perspective of conducting one set of empirical analyses by adopting the stochastic frontier model and using the actual operating data for Taiwanese banks spanning 1999–2007 as the sample. The static efficiency and dynamic TFP productivity change and its composition are regarded as the banks’ performance measures. Of these, except for the conventional input and output factors, we introduce the risk-bearing extent gauged by using the reciprocal capital adequacy ratio as the risk input factor. We simultaneously segment the empirical results into two groups, public and private banks, for comparison. In the econometric analysis, we also provide the estimation results without considering the latent impact of the risk input as the contrary to reveal the discrepancy and variation. We then attain numerous interesting findings. Firstly, the results support econometrically the hypothesis that the public banks and private banks should belong to distinct technological sets and face separate short-term technological frontiers. Secondly, the model specification considering risk input can portray the banks’ frontiers better; meanwhile, neglecting the risk input might induce an overestimation of the degree of scale economies. We also find that the public banks have higher scale elasticity than the private banks, whatever the risk input that has been considered. Moreover, neglecting the influence of the risk input might visually result in the private banks showing superior efficiency and a slightly lower operational technological level. However, after correcting the risk input, the two groups’ efficiency and technologies are indeed quite close. Finally, neglecting the risk input would bring about a distortion of the TFP estimation for banks, including a biased estimation of the technological frontier and an overestimation of the degree of scale economies. After the correction, the private banks’ productivity index drops significantly, deriving some implications. During the sample period, the productivity of Taiwanese public banks notably improved by a 13.27% growth margin annually. As for the source of momentum, the effect of efficiency change is not notable. The contribution of technological capability is significant, but it seems to be merely a short-term phenomenon, while from a relatively longer-term perspective, the technological potential does not increase concurrently. Thus, the space for augmenting the technological level further would be adversely confined. Moreover, due to the more notable magnitude of the public banks’ scale economies, during the sample period, the contribution of mergers and the expansion of the operating scale to productivity were fairly outstanding. Relatively, the private banks’ productivity only reveals a slight improvement by an annual growth margin of 1.0121%. Such a finding does differ substantially from the growth margin of the figures obtained when ill-considering the risk input. This implies that in bartering risk-bearing as the term for further output growth, the cost might be that banks excessively aggrandize their scales of business, resulting in another financial crisis on the horizon. By virtue of this paper, we expect to reemphasize that in the ‘post-financial tsunami era’ people worldwide should already deeply appreciate that banking institutions and systems should develop punctiliously and progress under the inspections of academic research, rather than being left alone to design and bluster through their financial technological innovations, but understanding little or even deliberately ignoring the corresponding lurking risk, and then stretch their business inordinately. Otherwise, based upon the high externality of financial systems, the victims who suffer the final disastrous ending would again be us, the entirely innocent terrestrial collectivity.