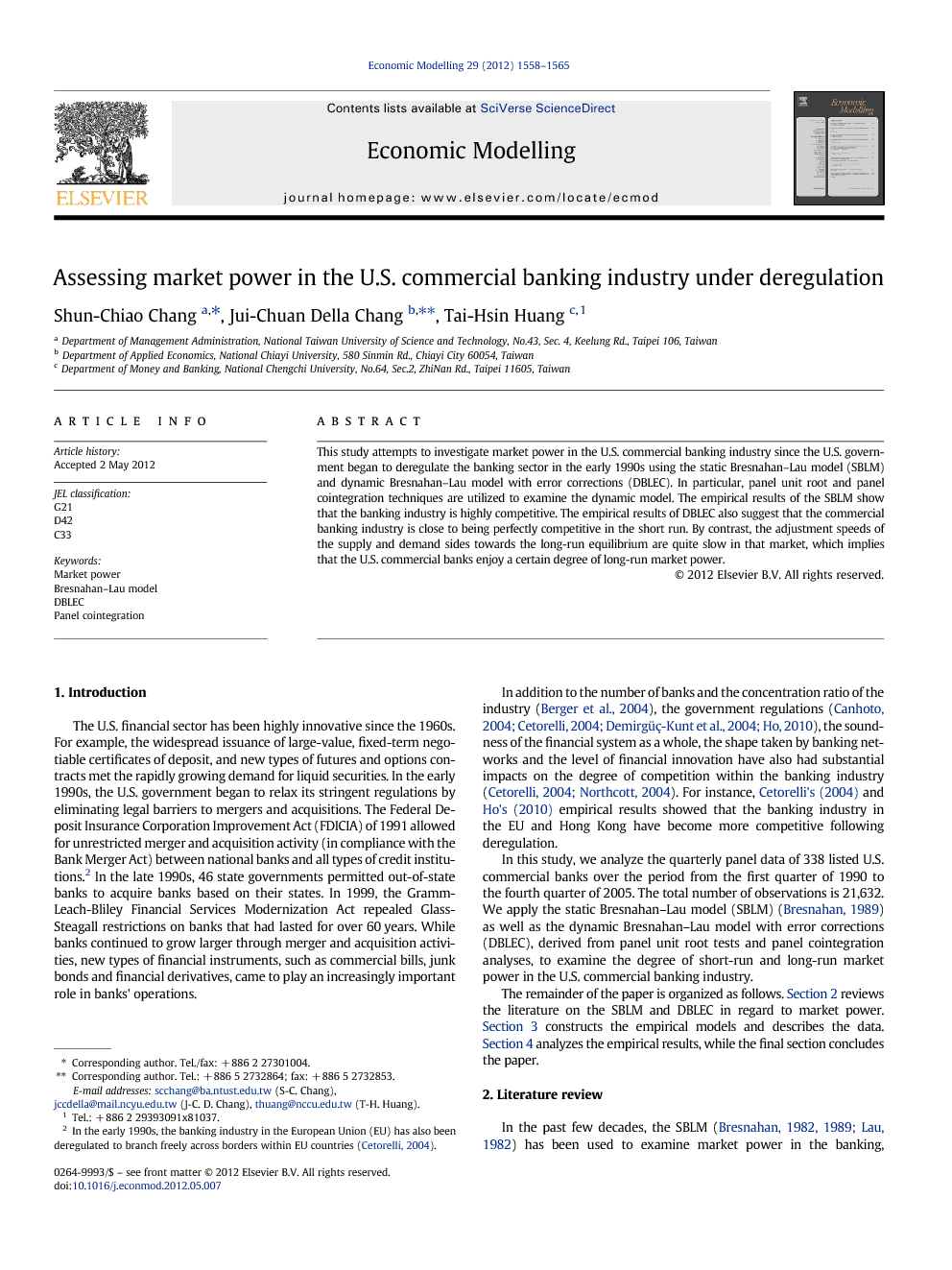 This study attempts to investigate market power in the U.S. commercial banking industry since the U.S. government began to deregulate the banking sector in the early 1990s using the static Bresnahan–Lau model (SBLM) and dynamic Bresnahan–Lau model with error corrections (DBLEC). In particular, panel unit root and panel cointegration techniques are utilized to examine the dynamic model. The empirical results of the SBLM show that the banking industry is highly competitive. The empirical results of DBLEC also suggest that the commercial banking industry is close to being perfectly competitive in the short run. By contrast, the adjustment speeds of the supply and demand sides towards the long-run equilibrium are quite slow in that market, which implies that the U.S. commercial banks enjoy a certain degree of long-run market power.

The U.S. financial sector has been highly innovative since the 1960s. For example, the widespread issuance of large-value, fixed-term negotiable certificates of deposit, and new types of futures and options contracts met the rapidly growing demand for liquid securities. In the early 1990s, the U.S. government began to relax its stringent regulations by eliminating legal barriers to mergers and acquisitions. The Federal Deposit Insurance Corporation Improvement Act (FDICIA) of 1991 allowed for unrestricted merger and acquisition activity (in compliance with the Bank Merger Act) between national banks and all types of credit institutions.2 In the late 1990s, 46 state governments permitted out-of-state banks to acquire banks based on their states. In 1999, the Gramm-Leach-Bliley Financial Services Modernization Act repealed Glass-Steagall restrictions on banks that had lasted for over 60 years. While banks continued to grow larger through merger and acquisition activities, new types of financial instruments, such as commercial bills, junk bonds and financial derivatives, came to play an increasingly important role in banks' operations. In addition to the number of banks and the concentration ratio of the industry (Berger et al., 2004), the government regulations (Canhoto, 2004, Cetorelli, 2004, Demirgüç-Kunt et al., 2004 and Ho, 2010), the soundness of the financial system as a whole, the shape taken by banking networks and the level of financial innovation have also had substantial impacts on the degree of competition within the banking industry (Cetorelli, 2004 and Northcott, 2004). For instance, Cetorelli's (2004) and Ho's (2010) empirical results showed that the banking industry in the EU and Hong Kong have become more competitive following deregulation. In this study, we analyze the quarterly panel data of 338 listed U.S. commercial banks over the period from the first quarter of 1990 to the fourth quarter of 2005. The total number of observations is 21,632. We apply the static Bresnahan–Lau model (SBLM) (Bresnahan, 1989) as well as the dynamic Bresnahan–Lau model with error corrections (DBLEC), derived from panel unit root tests and panel cointegration analyses, to examine the degree of short-run and long-run market power in the U.S. commercial banking industry. The remainder of the paper is organized as follows. Section 2 reviews the literature on the SBLM and DBLEC in regard to market power. Section 3 constructs the empirical models and describes the data. Section 4 analyzes the empirical results, while the final section concludes the paper.

Prior to the 1990s, generally accepted restrictions on inter-state banking ensured that large banks could not become nationwide oligopolists. However, starting in the 1990s, the competitive impacts of the government's liberalization of the banking sector began to be more seriously questioned. To address this issue, in this study we have estimated models of the SBLM and DBLEC using data for listed commercial banks operating in the U.S. Although the estimated SBLM market power indicator is statistically significant, its value is quite close to zero, indicating that the industry is nearly perfectly competitive. This is consistent with the results obtained by Shaffer (1989) who studied the same industry over the period 1941 to 1983. In addition, an increase in the interest rate on bank loans and in the interest rate on three-month Treasury Bills is found to reduce the demand for bank loans, while an increase in real GDP by contrast is found to raise the demand for bank loans. The empirical results from the DBLEC demonstrate that the short-run market power indicator is significant but again close to zero, indicating that the banking industry is nearly perfectly competitive in the short run. However, as the long-run market power indicator is significant and deviates from zero, some degree of market power does exist in the industry in the long run. This study mainly contributes to providing a more comprehensive analysis of market power in the U.S. commercial banking industry after 1990, while the SBLM and DBLEC approaches presented in this paper exhibit some limitations. Thus, we leave for future work the question of whether dynamic competition among individual banks with the Panzar-Rosse model could serve as a useful step in the right direction.