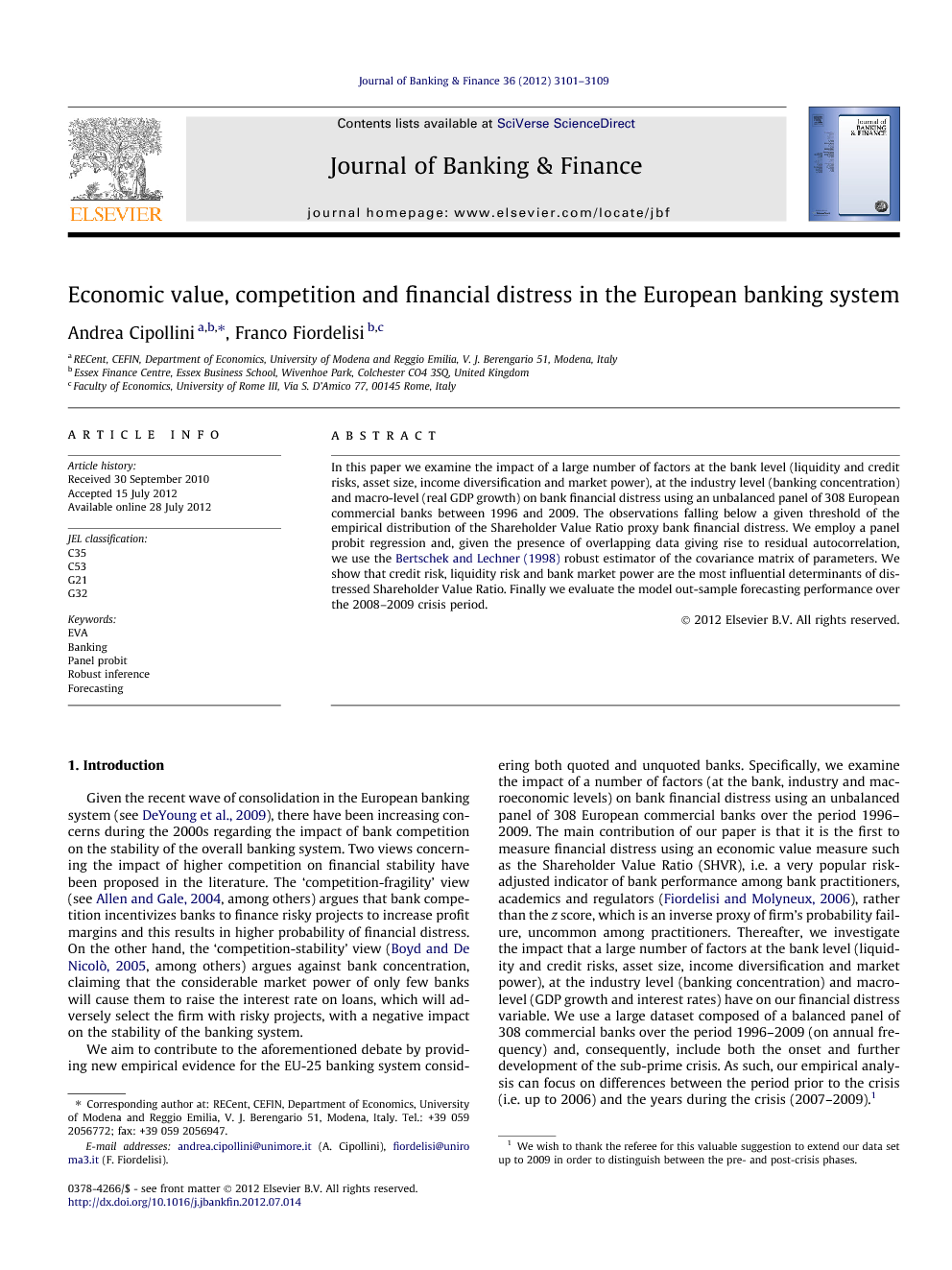 In this paper we examine the impact of a large number of factors at the bank level (liquidity and credit risks, asset size, income diversification and market power), at the industry level (banking concentration) and macro-level (real GDP growth) on bank financial distress using an unbalanced panel of 308 European commercial banks between 1996 and 2009. The observations falling below a given threshold of the empirical distribution of the Shareholder Value Ratio proxy bank financial distress. We employ a panel probit regression and, given the presence of overlapping data giving rise to residual autocorrelation, we use the Bertschek and Lechner (1998) robust estimator of the covariance matrix of parameters. We show that credit risk, liquidity risk and bank market power are the most influential determinants of distressed Shareholder Value Ratio. Finally we evaluate the model out-sample forecasting performance over the 2008–2009 crisis period.

Given the recent wave of consolidation in the European banking system (see DeYoung et al., 2009), there have been increasing concerns during the 2000s regarding the impact of bank competition on the stability of the overall banking system. Two views concerning the impact of higher competition on financial stability have been proposed in the literature. The ‘competition-fragility’ view (see Allen and Gale, 2004, among others) argues that bank competition incentivizes banks to finance risky projects to increase profit margins and this results in higher probability of financial distress. On the other hand, the ‘competition-stability’ view (Boyd and De Nicolò, 2005, among others) argues against bank concentration, claiming that the considerable market power of only few banks will cause them to raise the interest rate on loans, which will adversely select the firm with risky projects, with a negative impact on the stability of the banking system. We aim to contribute to the aforementioned debate by providing new empirical evidence for the EU-25 banking system considering both quoted and unquoted banks. Specifically, we examine the impact of a number of factors (at the bank, industry and macroeconomic levels) on bank financial distress using an unbalanced panel of 308 European commercial banks over the period 1996–2009. The main contribution of our paper is that it is the first to measure financial distress using an economic value measure such as the Shareholder Value Ratio (SHVR), i.e. a very popular risk-adjusted indicator of bank performance among bank practitioners, academics and regulators (Fiordelisi and Molyneux, 2006), rather than the z score, which is an inverse proxy of firm’s probability failure, uncommon among practitioners. Thereafter, we investigate the impact that a large number of factors at the bank level (liquidity and credit risks, asset size, income diversification and market power), at the industry level (banking concentration) and macro-level (GDP growth and interest rates) have on our financial distress variable. We use a large dataset composed of a balanced panel of 308 commercial banks over the period 1996–2009 (on annual frequency) and, consequently, include both the onset and further development of the sub-prime crisis. As such, our empirical analysis can focus on differences between the period prior to the crisis (i.e. up to 2006) and the years during the crisis (2007–2009). 1 Regarding the methodology, a straightforward approach to modeling the impact of a number of factors (at the bank, industry and macroeconomic levels) on bank financial distress would be to use ordinary least squares regressions. However, this technique may make our results merely be driven by small changes in the dependent variable (SHVR), while there is a need to differentiate among sizeable increases, sizeable decreases, and relatively constant levels of shareholder value to accurately measure the financial distress. As such, we build a binary variable having value equal to one when we observe values of the SHVR falling below either the 25th percentile or the 20th or the 15th percentile. Thereafter, our modeling framework is based on a panel probit regression model, and our contribution is also to make inferences in the context of such a modeling framework. In particular, we take into account the presence of overlapping data, due to a focus on a forecast horizon over the next 2 years and data observed annually. The choice of a 2 year horizon is along the lines of the Early Warnings Signal models put forward by Kaminsky et al. (1998) to predict the probability of currency (and also banking) crises (see also Berg et al., 2005, for a review of the prediction performance of EWS). The presence of overlapping data gives rise to residual autocorrelation in the forecast errors. We use the Bertschek and Lechner (1998) non-parametric type of correction to the standard errors of the parameters estimated, in a first stage, by Full Information Maximum Likelihood. We also assess the out-of-sample forecasting performance over the 2008–2009 forecast horizon of the panel probit relative to that obtained by a naïve predictor, based on the unconditional probability forecast. Our empirical findings show that credit risk (measured by the ratio of loan loss provisions to total loans), liquidity risk (measured by the ratio of liquid assets to total assets) and bank market power (measured by the Lerner index) are the most influential determinants of distressed SHVR. Overall, our finding supports the competition-fragility view put forward by Allen and Gale (2004). Moreover, we find that the pooled probit regression model is the one improving, in terms of out-of-sample prediction performance, upon a naïve predictor (based upon the unconditional probability forecast), especially for countries such as Portugal, Ireland, Greece, Italy and Spain, that is those EU countries, which manifest most the greatest financial strain during the most recent EMU sovereign debt turmoil period. The remainder of the paper is organized as follows. Section 2 presents data and variables, Section 3 provides a description of the econometric methodology and Section 4 discusses our empirical findings. Conclusions are drawn in Section 5.

This paper assesses the impact of a number of determinants on bank distress in fourteen European countries, using an unbalanced panel of 308 commercial banks observed annually over the 1996–2009 sample period. Differently from previous papers that focused on measures based on profits to assess bank stability (as the z-score), we measure financial distress using the Economic Value Added, i.e. a very popular risk-adjusted indicator of bank performance among bank practitioners, academics and regulators ( Fiordelisi and Molyneux, 2006). We proxy distress by focusing on the worst outcomes (i.e. either those below the 25th or those below the 20th percentile, or the 15% worst outcomes) of the ratio of the Economic Value Added to the Capital invested, which is known as the Shareholder Value Ratio, SHVR. For this purpose, we fit either a pooled panel or a country fixed effect panel probit regression to the binary indicator of distress and, for inference purposes, we use a robust estimator of the covariance matrix of the parameters, to account for residuals serial correlation arising in the presence of overlapping data. The robust estimator (based on a non-parametric method, along the lines of Newey (1993)) is the one suggested by Bertschek and Lechner (1998), and it is suitable for the case examined in this study, given the use of a large cross section and a small time series length (which is typical when dealing with bank balance sheet data). Inference results show that credit risk, liquidity risk and bank market power are the most influential determinants of distressed Shareholder Value Ratio. Overall, our findings on the lower tail of SHVR empirical distribution complement those of Fiordelisi and Molyneux (2010b) who use a smaller dataset (an unbalanced panel of EU-25 banks running from 1998 to 2005) and focus on the explanation of the conditional mean of EVA. Finally, leaving the 2008–2009 crisis period out-of-sample, we find that the pooled probit regression is the one that improves (in terms of forecasting performance) upon a naïve predictor (based upon the unconditional probability forecast), especially for countries such as Portugal, Ireland, Greece, Italy and Spain, those EU countries which manifest most of the financial strain during the most recent EMU sovereign debt turmoil period. Our results have various policy implications. First, we find a negative link between bank market power and distress. This result is consistent with Berger et al. (2009) and with Beck et al. (2011): even if market power in the loan market might result in riskier loan portfolios, our results suggest that the overall risks taken by banks do not necessarily increase probably due to sound risk-mitigating techniques. Second, we show that a small share of liquid assets increases the probability of observing distressed values of SHVR. This finding supports the Basel 3 accord stressing the importance of setting rules for banks to manage liquidity risk (for instance through a liquidity coverage ratio). Third, our findings provide empirical support to banking regulation in terms of capital requirements necessary to absorb losses related to credit risk: we find that a higher proportion of non-performing loans increases the probability of observed distressed SHVR. Finally, our results support the view that the originate-to-distribute model did not raise moral hazard in European banks’ business operations (e.g. encouraging carelessness in risk-taking).